I shared a short video on Facebook about "Shoulder Taps" last week.

Generally,  I DO NOT LIKE strange men coming up to me and commenting on my appearance-- ICK-- but I believe this man was moved by the Holy Spirit to approach an elderly woman, and it ended up being exactly what she needed to comfort her in her grief.

Several times in my life I have felt a strong urging to say something to someone, to pay for someone's meal, to give a word of encouragement, and I pushed through the discomfort because somehow I knew the urge did not come from me.

I thought I'd share an example of someone reaching out to me, that I don't think I've written about before.

Lady Jennie, a writer who lives in Paris, supported me big-time following Jack's death. She is now a dear friend, and we've had the opportunity to spend time together in NY and in my home (alas, not Paris-- yet!)

Shortly after Jack died, Jennie was studying her Bible and praying when she felt a nudge to share something with me.

It was a rather obscure Bible verse from the book of Isaiah. Weir-d.

But not so weird that I wasn't open to it.

Remember when my little Margaret felt a similar prompting? If you go back and read this post from before the accident you will be BLOWN AWAY when you consider it in light of what happened a few weeks later. (Note: I used to call Jack and Margaret Jake and Molly on the blog for privacy)


This is what Lady Jennie sent to me, a stranger, after feeling the strong urge to do so:

"Though you were ruined and made desolate
and your land laid waste,
now you will be too small for your people,
and those who devoured you will be far away.
The children born during your bereavement
will yet say in your hearing,
'This place is too small for us;
give us more space to live in.'"


Lady Jennie and I didn't know that within two years we would move, an action that was painful and would make zero financial sense but would get us out of a difficult living situation and allow us space to heal. No, our house isn't much bigger-- but our world has grown to include new friends and new opportunities.

She and I didn't know that in 4 1/2 years I would have an unplanned geriatric pregnancy that would result in sweet Andrew joining the family. And yes, in light of this verse I did wonder if Andrew would be twins!

While the verse didn't make sense to me at the time, it helped reinforce what was becoming clear even in, no, especially in, those early days of raw grief-- there was more going on than I could see and understand. In Virginia, in Paris, in Heaven. In many ways this helped me stay still and just TRUST, even when life felt desolate and ruined.

Trust that the right people would reach out to comfort me.
Trust that there was a plan for my life, even to expand it when it felt so diminished and depleted. Trust that somehow the deep, deep pain I felt would not always be so sharp.
Trust that the same God who told Margaret "You are MINE" and kept her safe by the creek, attentively loved and cared for Jack just as much.

We hear a lot about people making unsolicited comments to others, especially about parenting.

I think a good test could be whether we feel compelled to say something because it makes us feel superior, powerful, or it serves us somehow. Believe me, now that I have a toddler again, I am in situations regularly for people to HOLD THIER TONGUES when they see me parent in public.

I'm guessing Jennie didn't feel superior when she sent these verses to me. She probably felt vulnerable and a bit weird.  But she reached out anyway.

Whether you want to call it a nudge, a shoulder tap, or a prompting of the Spirit, I'm so glad she paid attention.

Introducing the cover to my new book for grieving children, A Hug from Heaven! 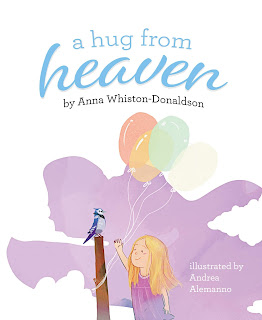 I hope you LOVE IT! The artist, Andrea Alemanno, is from Italy. I picked him from hundreds of illustrators, and am so pleased with how the illustrations throughout the book turned out. In the coming weeks I will be sharing Facebook live videos about how the whole process has been such as:

Deciding to go with a hybrid publisher
Choosing an illustrator
Deciding how to translate the words into pictures (harder than I thought!)

I pray that this book will fill a real need for the "forgotten grievers"-- children. When I managed a church bookstore, I kept searching for good grief books for kids, but kept coming up short. Then, of course, I wished there had been one for my own family when Jack died.

One of the neatest things about A Hug from Heaven is that it is told from the point of view of the person who died, speaking directly to the grieving child! A child experiencing the loss of any loved one, from grandparent, parent, friend, sibling (born or unborn) will be able to find comfort in these pages.

I'll let you know the actual release date as soon as I know it myself. It's looking like mid to late September. There will be opportunities to PRE-ORDER, which is extremely helpful in positioning the book to "find" more people, and to leave reviews. In the meantime, please start thinking about someone in your life who might be helped by this book.

Email ThisBlogThis!Share to TwitterShare to FacebookShare to Pinterest
Labels: A Hug from Heaven, grief books, grieving children, Rare Bird: A Memoir of Loss and Love, The best time to give a grief book 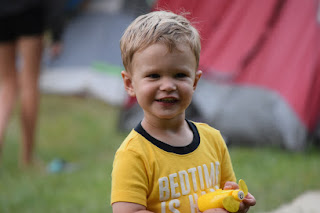 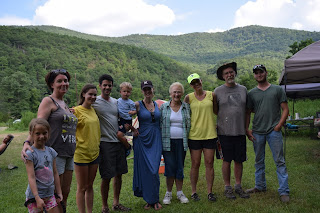 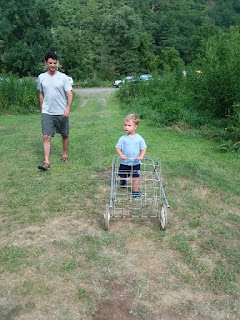 Last weekend we made our annual trek to the mountains of WV for our family camping trip. This is Andrew's 3rd trip, even though he's not yet 2 1/2.

I had more concerns this year as Andrew is more mobile, more curious, and more vocal than ever.  Fortunately, he had a wonderful time and we avoided the numerous hazards all around us such as ticks, hornets, the river, boiling oil, etc. He kept saying he had to sit on the potty, when the potty was a fly-filled latrine, and I was reminded of how fun potty training is going to be. A huge bonus was that I didn't have to milk myself like a cow the way I did on Andrew's first trip.

Andrew LOVES being around people, and having space to run around. He was already thrilled with being outside, so the throwing rocks in the river, staying up late, and eating all manner of junk were the icing on the cake for him. 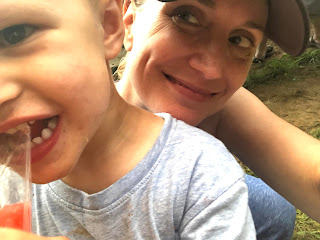 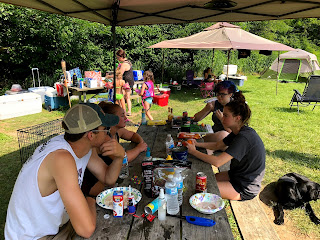 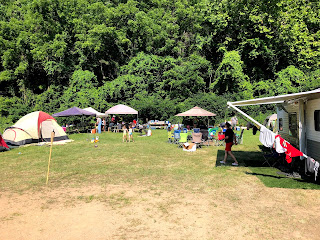 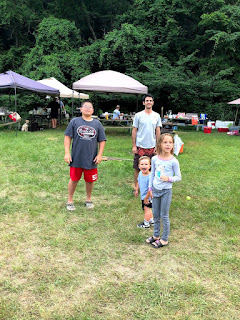 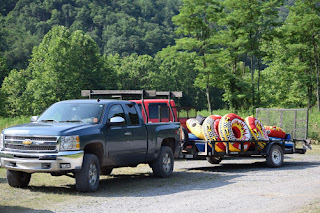 Speaking of cake/food, we had our annual Fry-day Fried Food Fest, but we added some healthier options this year as well.

6 dogs at our campsite provided entertainment, and my sister's addition of a brand-new camper was a great place for Andrew to nap, or as he says, "Have a moment." 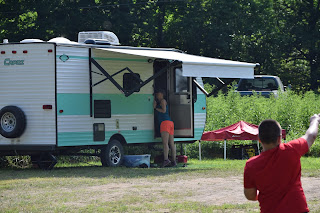 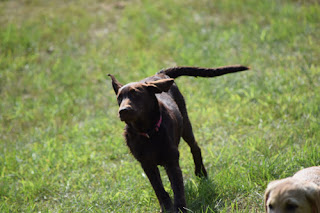 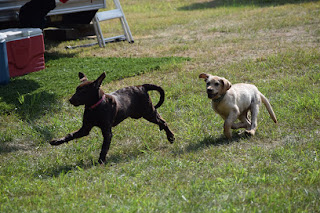 My Aunt was able to drive over and see us for the afternoon: 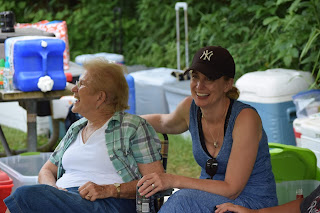 And, of course, we had a great rare bird sighting with this bald eagle: 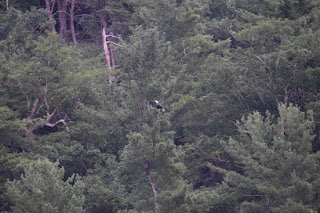 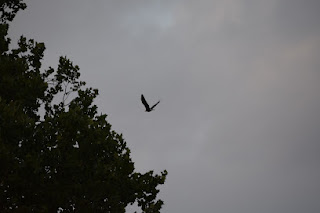 It was a lot of prep work and schlepping for 2 days of fun, but I'm grateful for time with family.

p.s. If you've never tired a honeybun cooked over a griddle, you are missing out.

What if the Underdog is your Under-WEAR?

I've always rooted for the underdog.

Maybe that's why I like sports' movies so much, even though I'm not into sports at all. I know it's why I brought a handful of flowers to the creepy shirtless guy who hung out in his yard next to my elementary school watching the children come and go. I'd heard he once had a job and a family, but now he just had his great dane, my crooked smile that was sure to make his day, and a lack of shirts.

I remember my mom telling me that while my gesture was nice, I didn't need to do it again.

My whole life I've had a heart for the bruised and lonely and a way of putting myself in others' shoes. Like a heat-seeking missile, I can foist myself on someone who looks uncomfortable at a party, whether or not they really need or want the attention I give. Even thrifting furniture is a small way of rescuing something from the dump and giving it one more chance.

Today I took this love of the underdog to a new level.

I've gained 15 lbs this year, mainly from M&M's and Netflix, and today I decided to suck it up and buy new underwear that fits. I grabbed a pack from a peg at Walmart, because I'm fancy that way. One pair had been pulled out and unceremoniously shoved back in. I pulled it out again, held it up to see if this new, improved size would work for me, then dropped the whole pack in my cart. The Undie-Rumpler had done me a favor by taking the guesswork out of sizing. I could have then looked for a neat, intact pack to purchase, but I was concerned no one would buy this rumpled one, and it would be relegated to the clearance bin or worse.

I'm home now, and I just pulled all 7 pairs out. The crumpled pair still looks like the right size, but the other 6 are gigantic. HUGE. Someone must have done some swapping in the store, and not only did not worry about leaving a disheveled pack as the underdog, didn't give a hoot about some poor shopper like me ending up with the wrong sizes. Sure, I've opened a pack or two in my time, to check sizes, but mix packs? Never. Clearly, this person is heartless and has watched neither Radio, Rudy, nor Remember the Titans.

With the high cost of babysitting, and my desire to never take a toddler shopping with me again, I guess I'll just keep them all. Shoving them back in the pack now would all but guarantee no one would buy them. Besides, I did just purchase two family size bags of Peanut M&M's, so I'm guessing  the undies won't be too big for long.
14 comments:

Email ThisBlogThis!Share to TwitterShare to FacebookShare to Pinterest
Labels: humor, I'm so cheap, I'm so weird, should have bought a throw pillow instead, stuff and nonsense
Newer Posts Older Posts Home
Subscribe to: Posts (Atom)