Life is Weird: When Worlds Collide 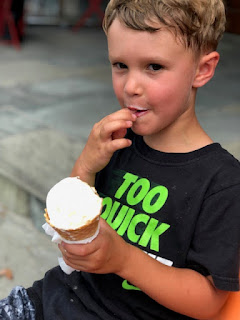 Sunday, Tim took Margaret down to college to get set up in a new apartment. In another life, I would have gone too, helping her organize her closet, treating her to lunch, maybe taking Charlie for a walk around a local winery. You know, grown-up, empty-nest stuff.

Instead, I was on Andrew-duty. I'd hoped for a sweet mother-son day since he's been really busy with outdoor camp this summer. While he still loves me, he hasn't been trying to climb back into my uterus like last year.  Instead, he has become friend-obsessed. To his great disappointment, all the neighbors were either on outings, at the pool, or out of town. I remember this developmental stage with Jack, when he would peer out our kitchen window to see if his buddy across the driveway was awake. He'd run out the door in his pj's to greet him, often forgetting to put on shoes. Margaret was more content to stay home, or participate in whatever fun Jack drummed up.

So as Andrew and I rode scooters up and down the street, looking for someone to play with, I thought about how weird life is. A tired, sweaty 51 year old on her dead son's Razor scooter, trying to keep up with her 5 year old on his new, entirely too-fast one. Hours later he would smash his head on a driveway, at the exact spot his helmet did not protect, but that is a story and a worry for another day.

I remembered how Jack considered it a good day when his special friend was available, and a bad day if  he wasn't. I remembered how the worst day of all of our lives was a day that same little boy was available  when he normally wouldn't have been. And how playing outside that late afternoon changed everything.

I realized how if it weren't for that moment, we wouldn't be experiencing this one.

I could feel September creeping into my bones. The dread and weepiness, largely kept at bay, but arriving early this year. Maybe because of menopause or the fact that Andrew is about to start Kindergarten. Maybe it's due to a year and 1/2 of worry, weariness, grief and disruption because of Covid. Yet most likely it's because the 10 year mark looms.

I hesitate to write about that creeping feeling, because I don't want dear ones who are early on their paths of grief to recoil and feel they are doomed to despair so far down a road that seems almost inconceivable to them. For now they must operate in the day by day, and the hour by hour. Secondary losses will pile up in their own time, and no one needs my gloomy rumination to take them further into the pit than they already are. My passion and privilege these past 10 years has been showing that healing, peace, and even (real, unforced!) joy are possible after great loss. I'm a regular, flawed person who keeps showing up for life-- not the one I thought I'd have, but the one I do have. And I am utterly convinced that Jack is happy and he is right here with me.

Most days I am even grateful to be parenting a little one, but it's something I have to dig deep for. It's no joke to parent again right when your nurturing and caregiving hormones have exited the building, and when your friends are "finding themselves"-- in new careers, relationships, or exotic locales. It's harder than I thought, and I thought it would be pretty hard.

Anyway, because I'm a woman and can keep 1,000 tabs open in my brain at once, all of these thoughts were on my mind as I walked, scootered, and watched for cars. A young man left my neighbor's house and climbed into his car. I had Andrew pull to the side so the car could pull out. The young man flashed a mega-watt smile as I waved him past, and all of my weird worlds collided at once.

He wasn't just anyone; he was the special friend, the one whose days with Jack were his very best days, until the one that was everyone's worst. I don't know what the chances were for this encounter after so many years, in a different neighborhood, right at the moment I was pondering the intensity of young friendships, the potential (no, the certainty) of pain, and wondering if I'd have the strength to navigate it all again. I wondered what the young man was thinking, especially when he saw Jack's mini-me. What did he remember from those hot days so long ago? What did he make of me, a decade older, once a daily presence in his life, but then suddenly no more, because I needed to deal with my own family's trauma and let others tend to his?

I felt the sting of tears in my eyes, but kept on. We didn't find anyone to play with, so we ended up going to mini-golf, the ice cream shop, and the dollar store. Our very long day was a mix of highs and lows-- loneliness, hurt feelings, a tantrum, a scooter crash, deliciously sticky fingers, and a hole in one.

I think in the coming weeks I will try to emulate early-grievers and re-learn to take things hour by hour and day by day. 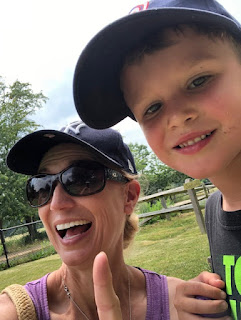 IMPORTANT: If you subscribe to this blog by email, that feature is being disabled by the blog company in a few days. I do have your emails and will try to send posts to you that way, but it will no longer be automatic, and I am technologically impaired, so I can't promise I'll figure it out. I'm usually over on facebook at An Inch of Gray and Instagram @annawhistondonaldson and would love keep in touch that way too. XOXO