Board Games for Days!

Most days are Monopoly Days around here, and Monopoly Empire is our favorite. Yesterday, we tried Sorry. I'm glad the thrift shop has a constant supply of games. 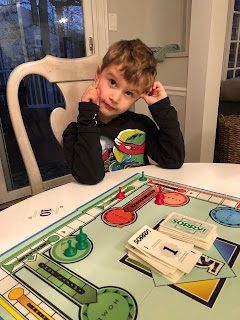 Anyone Want to Help Me Move a Couch?

I’ve mentioned before that I have decided quit waiting for enthusiastic buy-in from my husband.

It's frustrating to think it took me almost 30 years to figure this out. I had hints when it was time to get our first dog. The months dragged on as I waited for Tim to show a modicum of enthusiasm. Finally, a one year old chocolate lab fell in our laps, I arranged it, and Shadow joined the family. Guess who was Shadow's number one person? Tim. Years later, we went through the same thing with Charlie. What a love affair! If Tim talked to me and cuddled with me the way he does with Charlie, it would be Valentine's Day every day over here. I’m not saying I did these things behind Tim’s back. I got his less than enthusiastic, barely perceptible buy-in and then ran with it.

What made me think of this today? Well, despite my bad back, I swapped our kitchen and dining room tables by myself. It doesn't look great, and will probably only stay this way a week, but I don't care. I was feeling itchy in these four walls, and sometimes you just want to move shit around. When it comes to house stuff, if I didn’t get the ball rolling, we’d be in a state of stasis forever. Men, don't often wake up and say, "I wonder if that couch would look better by the window." My latest project is getting a tree cut down, and I've set a goal for myself to on figure that out this week. Tim will know, but I won’t wait for him to high-five me on it. Few things turn a man into an ardent conservationist or decorating purist than saying you want to cut down a tree, or, God forbid, paint wood paneling.

I'm not saying men shouldn't have a say in anything. I'm just preaching to myself here, REMINDING MYSELF not to use Tim's general lack of enthusiasm as an excuse, when I really could pick up that paintbrush, move that table, plan that trip, or do that next thing.

99.9% of the time, he likes what I've done. He becomes the dog's best friend. He appreciates having appliances that aren't broken. He thinks white paint really brightens the space. He’s glad we went on those trips. Now I know I’m probably mashing everything up because it’s Monday morning and I haven’t had my third cup of tea yet, but it kind of reminds me of fooling around. I may be less than thrilled about the prospect, but afterward I’m always glad to have participated. Sure, there’s buy-in from me, but sometimes the enthusiasm comes later.

Let’s hope Tim feels the same way about the tree.