I couldn't decide whether to go on our family's annual camping trip this year. The thought of tent camping with a three month old baby seemed overwhelming, sticky, and scary. I mean, this is NOT glamping. We have no running water and our bathrooms are latrines. If Andrew became uncomfortable and inconsolable, I wasn't sure what I'd do.

Up until 3 days before, I planned to have Tim and Margaret go while Andrew and I stayed home. But, as I may have told you, Andrew can be a real fuss-pot, so I started weighing whether I wanted to be alone 24/7 with a fuss-pot, or roughing it with that fuss-pot where I'd have family support.

I made reservations at the closest motel to the campground so Andrew and I could stay there at night. If you've ever slept in a hot tent, you know it's sauna-like, but in a bad way. When I found out the weekend was supposed to be VERY HOT, the idea of a cool room was the only option, I figured.

So off we went on Friday, heading 3 hours away into the mountains, at which point I picked up my motel key. The additional 50 minutes on the world's windiest road to the campsite made me reconsider the feasibility of going back and forth to the motel. Andrew does not like the car, and I didn't want to put him through that.

Here's a towel from the motel gift shop: 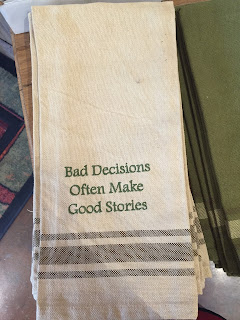 I hoped the trip would be good enough for a few stories, but not EPIC enough to make it to dish towel status.

For reasons that are too boring to discuss, I should let you know that I've been pumping milk for Andrew since he was 4 weeks old, instead of nursing him. He showed a strong early preference for the bottle, so I just rolled with it. Or, as I like to say, twice the work for none of the fun. I was overwhelmed thinking of pumping and storing breast milk at a rustic camp site, but I was determined to make it work. We had bottles, coolers, and ice packs. But as I was pumping milk in the car, on the world's windiest road, we started to smell something burning. The portable pump, plugged into the car charger, shorted out.

Thankfully, I brought formula as a back-up, so I knew the baby would be fine, but I was now in an isolated spot with quickly filling boobs and a broken breast pump.

We set up camp and I tried to interest Andrew in nursing. He acted as if I were trying to feed him a Twinkie covered with dog poo. Uh-oh!

The hours passed, and my window of opportunity to drive back to the motel closed as darkness set in. Tim borrowed an air mattress for us, we unzipped his sleeping bag to make a blanket, and I wadded up a t-shirt to use as a pillow. I hadn't packed those things for me as I thought I'd be sleeping in a motel. Soon we settled Andrew into his Rock and Play.

My big fear was that he would cry all night, keeping everyone else awake. I dreaded not being able to console him if the new surroundings threw him off. Instead, he had the audacity to sleep through the night.

While this might seem like a good thing, to someone who pumps 4-5 times every day, it was troubling. I tried to sleep, but it was like having throbbing balloons full of hot rocks attached to me. By two in the morning, I was desperate. No pump. A sleeping baby who would not wake up to nurse. A husband snoring blissfully next to me. I had no choice but to start expressing milk by hand. For the next hour or so, I milked myself like a cow, soaking an entire beach towel. Good times.

The next two days, Andrew was more receptive to the boob, and he proceeded to help his mom out by nursing a bit to take the edge off.

Being outdoors all day kept him relatively fuss-free. Yes, it was hot, but we stayed in the shade and appreciated the strong breeze. The best part was having plenty of  people to entertain him. The last day was actually cool enough for long sleeves! 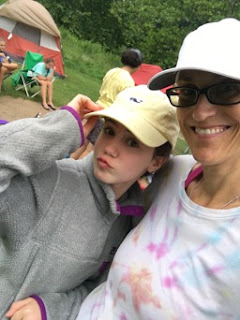 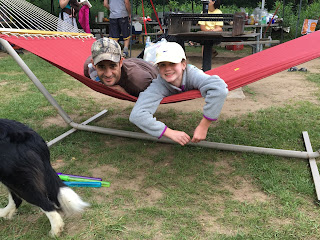 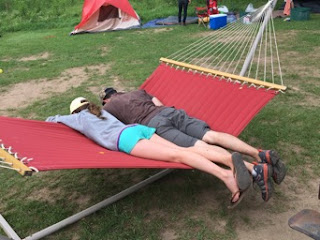 Hi! I'm Andrew, and I slept all night in this tent! 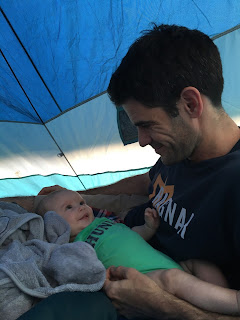 Even jumping in the air can't make Tim and Margaret as tall as our nephew, Jack's BFF! 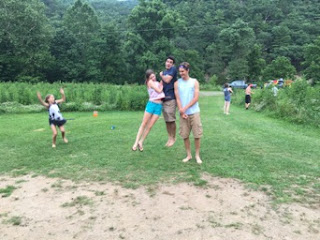 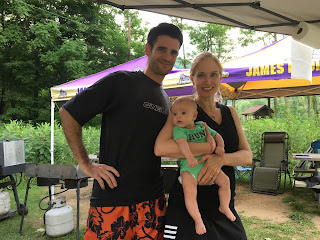 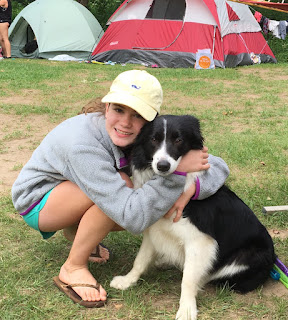 We ate copious amounts of deep fried food, from chimichangas to funnel cake and fried oreos, told stories around the campfire, and watched some awesome wiffle ball. We even made Andrew his own little bathtub/swimming pool to keep him cool.

As Jack's BFF cousin and his girlfriend were packing up to leave, a huge bird swooped low over the campsite and kept making higher and higher circles until their car pulled out of sight. Hard times, good times, holy times.

I  still can't believe we took a baby camping. I mean, I haven't even been brave enough to take him to Target yet!

Next year should be even more interesting as he'll be toddling around.

I'm guessing you took a pass on the going-face-down-in-the-hammock activity.

You have a remarkable gift for turning -- less than optimum, shall we say? -- incidents into narratives which entertain. :-D

A,great story but happily not dish towel worthy (except for your throbbing breasts would argue I am sure.)
Xo

Ouch ouch ouch! It has been 30 years since I nursed but the pain of waiting too long between feedings is still a strong memory! Brava to you for getting out there!

Oh, Anna, this is wonderful. What an experience -and your Andrew has such long legs - he is adorable. Someday he'll appreciate that he got to go camping and not sleep in a motel!

I can't believe you did that! Very impressed.

OH- I feel your pain---from camping in a hot environment to full breasts of milk tht 'lets down' at the first whimper whether baby is ready or not. I'd say you adapted quite well to the whole experience. I don't suppose you got a refund on your motel room? lol

How awesome was that about the bird swooping around Jack's cousin? I mighta got a little lump in my throat reading that.

You dear woman. I had mastitis twice and prefer labor over that kind of pain so I appreciate your dire need to express yo-self! Well done, friend. And every time I see Andrew's little gummy smile I giggle right out loud. You know what that's called in shorthand? GOD. 😍

So glad everything worked out! Love the bird part of your story.

Anna, I laughed so hard at this post. We've all been there. My electric breast pump once shorted out in the middle of the night, and I drove 20 miles (I was in the middle of nowhere at my parents' lake house) to a 24-hour wal-mart to buy a new breast pump for relief. The struggle is real. Love to you, and please post more pictures of sweet andrew.

Wonderful. I could read what you write all day long. Having experienced it all - breast/bottle/pumping/tears/blown up boobs etc with three babies I laughed, cried and sweated along with you. Thank you!

Funny story! Good for you for making the best of some tough situations and giving us some laughs. I have tried camping with babies and toddlers. While it is a lot of work, its also fun. The outdoors is instant entertainment for the little ones!

Hilarious description of your breast milk oddysey! Ah, the "joys" of motherhood! As far as Andrew is concerned, you need to forget about Target and plan more camping trips. So glad it was a success! And he is too, too cute...

You are a dedicated mother to pump 4 times a day.

Good times Thank you for the laugh :)

Hilarious! Nursing is the earthiest thing ever and engorgement makes a mother feel just so bizarre.

I have a weird question..

I've followed your blog for years. At one point, through your blog, I came across another blog written by a mother who's daughter had died in a car accident. Her older daughter had been driving the car and I believe they were coming home from gymnastics.

Do you have any idea what blog this is? I thought of her randomly and can't remember the name, haven't been on it for years. I feel like it was maybe on your "blogs you follow" thing at one point. I was just wondering and hoping they were doing ok.

What a great story. I love this post and I love how it all turned out!

Thank you for bringing back the memory of camping with toddlers in the rain. And mud.In a leaky tent. And being so miserable that I made my husband drive us 50 minutes to have dinner in a Red Lobster rather than have to do outdoor cooking. You were so brave. Really glad it worked out for you.

I milked myself like a cow..... gosh, that line cracked me up.