Staying home during the pandemic was well-suited to the combo of my tiny bladder and huge water consumption.
But things have started to open up a bit here with spring weather, devoted mask-wearing, and vaccines. We even signed Andrew up for t-ball. Last night was an hour-long practice. That, coupled with the drive across town, put my bladder right in the danger zone. 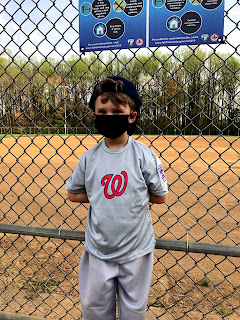 After practice, we realized we needed to eat. You know I like eating and despise cooking, so we grabbed some food at an outdoor space in our town.
I drank nothing with my meal and kept my legs crossed. 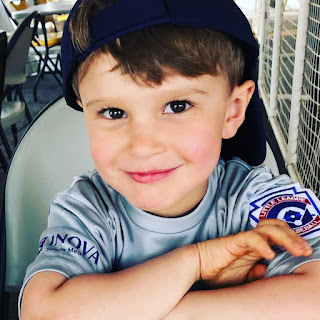 It was taking a while to get the bill, so I told Tim to wait for it and drive Andrew home in his car, while I raced  home to the bathroom. Those final seconds unbuckling Andrew from his carseat have gotten me in a wee bit of trouble before, so I was glad to be on my own. Tim eyed me suspiciously as if I were trying to pawn Andrew off on him for a few moments of alone time (who, me???), but he acquiesced.
All was fine until I reached our neighborhood. The trash cans were lined up for the next morning. I noticed one had a glass vase, that looked to be about the size of a large milk jug, sticking out of it. Not content to let it go a landfill, I decided to grab it. Perhaps it would like nice in our house, or I could give it away on our Buy Nothing group.
As I pulled it out of the huge, wheeled trashcan, I stared in wonder. It was like a magician's scarf that just kept coming. What I thought was a sizable vase or jug seemed to grow as I reached deeper into the can, trying not to pee myself because of the numerous muscles involved. I placed it in the car, thanked my pelvic floor for making it this far, and climbed into my car.
Then Tim drove by.
He slowed down and asked what I'd been doing, but I silently waved him away with flailing arms, knowing if I had to explain why I'd been digging in the trash, I was going to wet myself.
Moments later, I was in the garage. So many small victories: I'd attended a sporting event with my precious kid. I'd stayed out of the house for more than an hour. I'd saved the environment with my eagle eyes and brute strength hauling the vase into the car. The only thing that stood in my way was Tim, about to get Andrew out of the other car. I waved him aside again, my body bent, my face set in determination. I had the garage to traverse, then the kitchen, then a 1/2 flight of stairs down to the bathroom.
Damn you, split level.
Then, as if he didn't know me at all. As if he hadn't been dealing with my tiny bladder since early 1992. As if he'd never been on a road trip with me. Or seen 3 babies' heads crown in my nether-regions, doing untold damage. He decided  to delay me with a smirk and, "You didn't LOOK like you were in much of a hurry to get home down on the road there."
At which point I started to laugh. I thought of the world's biggest vase in my car.
All was lost.
I  crumpled to the ground, trapped between the car and the garage wall. The kitchen was close, but it might as well have been a continent away. I let loose a torrent like no other.  Andrew watched from his carseat. Tim looked on in horror and pity, trying to hold me up, but also avoid the splashing.
A voice through the window: "Mommy always says she's going to pee herself, but this time I think she really did."
Anyone want a little vase? 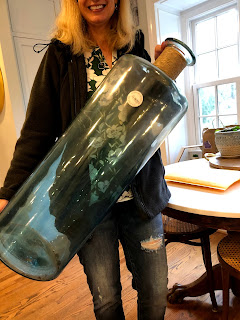