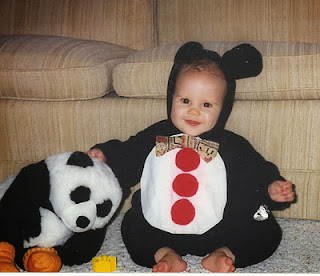 ...from our house to yours!

To see our Halloween pics through the years, check this out.

I'll be eating candy and writing tonight. What do you have planned?

Email ThisBlogThis!Share to TwitterShare to FacebookShare to Pinterest
Labels: grief, Halloween, Margaret is not too old to trick or treat, miss our boy, panda costume

A reader sent me this many months ago. It was hard to read back then, because I couldn't have pictured ever having a good day. Now, I can.

...from the novel Goodbye for Now by Laurie Frankel

"To love is to lose. It's just that simple. Maybe not today but someday. It is the inevitable condition of humanity. Some sadness has no remedy. Some sadness you can't make better."

"But then why isn't everyone walking around miserable all the time?"

"Because ice cream still tastes good. And sunny and seventy-five is still a lovely day. And funny movies make you laugh, and work is sometimes fulfilling, and a beer with a friend is nice. And other people love you, too.  [Death] has been around since time immemorial. You've run up against it. And there's no getting around or over it. You stop and build your life right there at the base of that wall. But it's okay. That's where everyone else is too. Everyone else is either there or on their way. There is no other side, but there's plenty of space there to build a life and plenty of company. Welcome to the wall."

So I live my life right here,  knowing that death is real and can't be avoided, and some days are indeed very, very good. But I do believe that those I love who have gone before me will be waiting. And the biggest reason this life can still seem bearable, and even often beautiful, is because of that hope.
51 comments:

Was looking through the blog today getting inspiration for the book I'm working on. Came across this and it made me cry.

This one is for moms who are struggling as they watch their kids struggle today:

Email ThisBlogThis!Share to TwitterShare to FacebookShare to Pinterest
Labels: grief, hang in there, I miss my Jack, sportsmanship, struggles

Sunshine after the Storm: A Survival Guide for the Grieving Mother

I was honored to be asked to contribute to an anthology for grieving mothers. It is a survival guide for moms, with an emphasis on pregnancy and infant loss.

The release was timed to coincide with Pregnancy and Infant Loss Remembrance Day, which is Oct 15. We will offer the eBook free on Amazon from Oct 13-17!

The print version is coming out shortly, and I'll be sure to let you know when, because there must still be people out there like me who want to hold a book in their hands.

If you or someone you love would be blessed by the messages of this book, that you are not alone and that you can survive, please pass along the word.

Remember, FREE Oct 13-17. Let's get this book in the hands of those who need it. 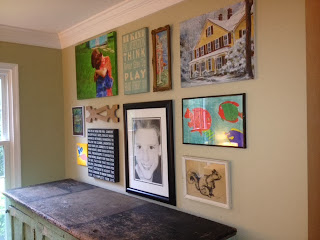 I have a lot of artwork to hang in the new house. I'd like to paint a few rooms first, so most of the paintings and pictures and mirrors will lean against a wall in the basement until I get around to it, say next summer? I love the paint color in our family room, however, so it was time to get some things on the walls! I started with twice as many pieces as made it onto this wall, so they'll find homes elsewhere in the house.

My first step was looking at what I thought would go well together. This included a painting by my mother in law of the "house that made me," some high school artwork by my mom, inspiring paintings by friends, and an amazing portrait of Jack by one of his classmates. Yeah, an 8th grader did that. Wow. 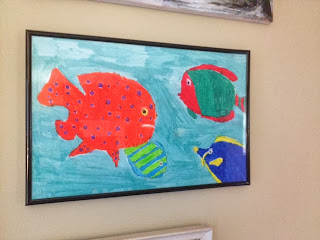 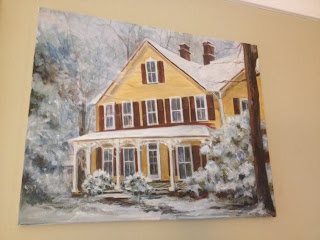 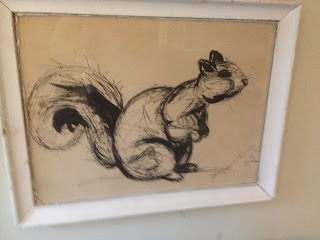 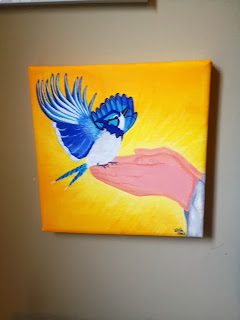 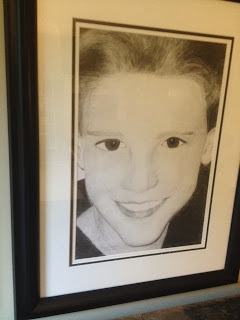 I had signs, too, one purchased from TJ Maxx and another hand painted by Kristi from Barn Owl Primitives with the words my sister said about Jack at his funeral, This is what she learned from him: 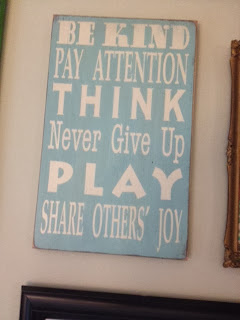 I wanted art from Margaret and Jack on there as well, so you'll find her fish painting plus his watercolor Tiffany window. The wooden piece is  a slat/spindle (?) from the porch railing of my great grandparents' house that is no longer standing in WV, and it hangs below a tender painting of Jack and his cousin. 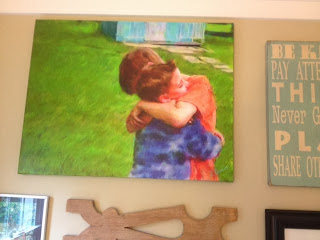 I tried Martha Stewart's technique first, of cutting brown kraft paper the size of each piece and then taping them to the walls. But the paper got curly and kept falling down, so I moved to the floor. I taped off an area the same size as the space on the wall and just arranged and rearranged until I liked it. 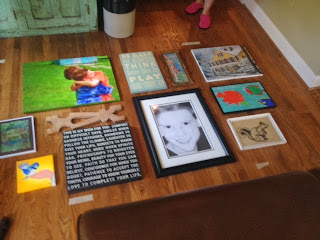 Then I had Tim start the nailing, so I could step back and see if it was coming together the way I wanted. 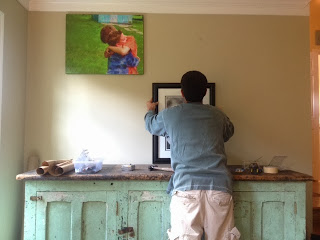 It's so nice to have these sweet paintings on the wall. Makes me want to get going and personalize more of the house.

So, what do you think of the piece of furniture beneath the gallery wall? We call it "The Dumpster Dive" because I got it out off someone's trash pile about 8 years ago. I have never loved Tim more than when he helped me remove it from the curb and get it inside the back of the minivan without making any snarky comments. 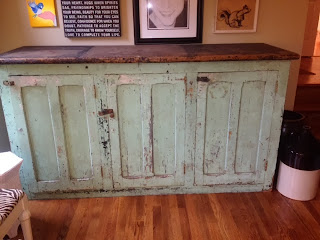 It lived in the carport at the old house and I knew that when the movers came last month it would be my one and only opportunity to get it inside after 8 yrs of waiting. Even at the last minute, the (male) movers and my (male) husband were debating the wisdom of bringing it inside a house and saying things like, "well, maybe if you fix it up." Puh-lease. Ain't no changing the Dumpster Dive.

There is a teeny weeny issue in that I think it is infested with carpenter bees. And that the latent larvae inside the bee tunnels may hatch sometime next spring and start feeding on the wood of our house, thereby reducing it to a pile of rubble.

Small issue, I'm sure. I mean, look at how great it is! 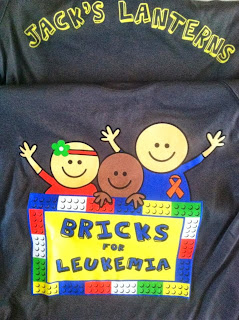 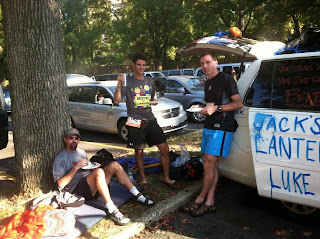 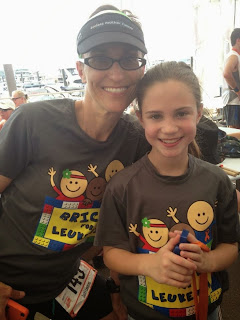 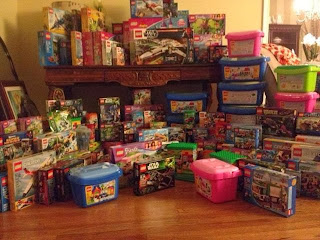 So the big race was last weekend! Tim and 11 other family members and friends ran a 199 mile relay in Jack's memory, and generous supporters donated 150 Lego sets to seriously ill children in the hospital. Thank you so much for your support! It was super hard to go into the Lego store for the first time without Jack, but I did it. I know that's not as hard as running almost 200 miles in the sweltering heat, or in the middle of the night, or up an almost vertical hill, but it was something for me.

As the racers gathered at our house before the race on Thursday afternoon, a bird flew into the kitchen! Through the garage, into the kitchen, and right onto the window ledge. There's a picture of it on the An Inch of Gray Facebook page if you want to see the little guy. It was calm. After a few moments, it flew out again. I couldn't help but think that our rare bird was stopping by to give his stamp of approval on the weekend to come.

The weather was much hotter and the course much hillier (mountainous!) than everyone expected, but the runners dug deep and finished strong. Way to go, Team Jack's Lanterns!

I want to tell you something my sister, Liz, shared with me yesterday. She is quite the runner, using her running as therapy and prayer time after Jack's death. Each time she runs a race in his honor, she safety pins a laminated photo of him to her back and takes off.

After each race, she likes to take a look at her bib number to see if there is anything significant she can learn from it in her Bible. For instance, if her bib number were #413, she might think of Margaret's favorite verse, Philippians 4:13: "I can do all things through Christ who gives me strength." This might lead her to consider the ways in which God strengthens her, too.

This time, the team had the race number 149 on their bibs. This didn't stand out to Liz as significant or remind her of any special verse, so when she went to her Bible, she decided to go to Jack's favorite verse, Luke 1:37, "For nothing is impossible with God" and keep reading in case there was a Luke 1: 49.

"For the mighty one is holy and
He has done great things for me."

Once again, Liz felt that her Jackie Boy was close, so close, because that verse sounds very similar to a line from Jack's Psalm of Thanksgiving that he wrote in 6th grade and is on the back of the prayer cards we handed out at his service. I want to share it with you today:


A Psalm of Thanksgiving
by Jack Donaldson

God, You are good,
Your goodness extends beyond
the bonds of eternity.

God, You have done great things,
Helping many in times of need.

God, you have done great things for me,
You have helped me in times of struggle.

God, You are merciful.
Sacrificing Your only Son for our life.
God, You are powerful,
You reign supreme over all of the nations,

God, You care about me,
Your love endures forever.


Even though it's hard to see it sometimes, God did do great things for Jack in his short life. And He still does great things for me. Many days I can see this, and that is good.
33 comments: 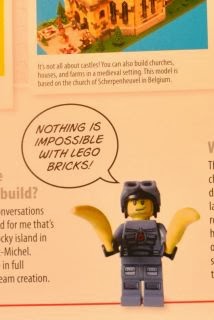 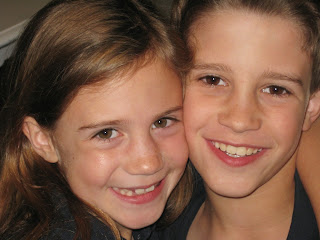 This weekend a team of 12 people will be running a 200 mile Ragnar Relay in Jack's honor. They will run through the night from Cumberland, MD to Washington, DC in a collision of athletic prowess, sleep deprivation, body odor, and hysterical laughter.

The team includes Tim, his sister, my sister, his cousins, family friends, Jack's baseball coach, and an EMT from the night of the accident who has become a friend. They call themselves "Jack's Lanterns" and they race to bring light out of a dark situation. I thought you would like to read this awesome article my sister wrote about the team and why she runs.

Scroll down a few pages and you'll see a familiar face.