Don't Get Your Undies in a Bunch 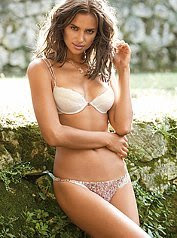 I barely ever go to the mall. As a teen I used to scoff at my mom when she said she hated the mall, because I loved the place. Our excursions, however, especially the bra-buying ones, were painful until she got me my own credit card at age 15 and turned me loose. Hard on the family budget, good for our relationship.
These days I avoid the mall because of the parking, the crowds and the excess. However, on the last day of Easter Break I took the kids to the mall to see a movie. Molly seemed to come alive as soon as we walked through the doors. We passed by Victoria’s Secret and I realized I had a gift card for “A Free Panty” that had come in the mail and it wasn't even expired!

I felt torn for several reasons. First of all, I have never, ever owned a pair of panties. Before you get all grossed out at my personal hygiene, I will clarify—I wear underwear, not panties. My mother, God rest her soul, wore underwear. My sister wears underwear, and I am raising an underwear-wearing girl.

I’m not trying to offend any panty-wearers out there. I know I am very much in the minority, but still. The word panty just doesn’t work for me. Kind of like “slacks.” I wear pants, not slacks. And here’s a bonus: I go pee, not tinkle. Never have, never will. These words make me squinch up my face when I say them, at least in my head. I don't think I've ever said them out loud.

Okay, so I felt a little weird clutching my “free panty card” because of my own weirdness about the word, and because I was fully aware of the two impressionable kids who were with me.

But you know how I like free stuff, so I sauntered into V.S. as if it were the most natural place in the world to be with a 7 and 10 year old on a Monday afternoon. We were in for quite a show. The current display was titled: “Cheeky, Cheekier, and Cheekiest!”

All mannequins were decked out with various amounts of cheek showing. The kids’ eyes were like saucers. It was if Opie Taylor and Gomer Pyle had been plopped down in the red-light district in Amsterdam.

I knew I had to act fast, but I was overwhelmed by the colors, the choices, the words proudly splashed across the fronts and, when possible, the backs of each “panty.” I started to sweat. Eventually I found a plain gray cotton pair and headed to the register.

The kids had started to process, and they began to share their thoughts. Jake’s comment on the 10 foot high boobalicious photo on the wall: "I think it’s inappropriate for that lady to be standing in the middle of her garden in her underwear.” Yes, underwear. Good boy.

Molly’s thoughts: “This place seems really weird, but I can see myself loving it as a teenager.” Great.

I was in line forever when the salesMAN said to me. “You’re going to kill me, but the FREE PANTY (loud!) needs to be black or white.”

I hissed in my quietest hiss possible: “Look, I have 2 little kids here who have seen enough mannequin butt to last a lifetime. Make it work.” And he did.

The whole rest of the way to the theater, I felt guilty for dragging them in there. Were they scarred for life? Did I just sell out my kids to save $7.50 on "panties" (aargh!) that will probably ride up anyway?

No fear. Even if we’d never graced V.S.’s walls, we still had to walk by Abercrombie and Fitch with a 12 foot photo of a bare chested young man with his hand down the front of his pants. Not to be confused with the GUESS store next door: Shirtless man and woman kissing, with HER hand down HIS pants.

A few minutes later, we asked a nice young woman for directions to the elevator, except she turned out to be a “HE,” a fact not lost on the kids.

The movie may have been PG, but the mall was PG-13. I guess you won’t blame me for eating a purse full of candy during the movie to settle my nerves.

Email ThisBlogThis!Share to TwitterShare to FacebookShare to Pinterest
Labels: kids; parenting, PG living in a R-rated world, too much, too soon, Victoria's Secret

Wouldn't it be nice if all the PG-13 stores could be limited to one area of the mall (maybe the "red light" district?) Then the rest of us who don't need to smell overpowering cologne wafting from an overpriced store, or hear the blaring music so the employees surely go home with a headache every night, or see the half-naked models displaying 2 inches of merchandise could simply limit ourselves to the wing of the mall that houses Hallmark, Build-a-Bear Workshop, Things remembered, and Auntie Anne's pretzels. now THAT would be a perfect world.

One more reason to shop online or at Target :).

I practically lived at the mall as a teenager (for work and play) but I don't remember it being such a revealing place.

I love the malls that cluster the stores because it is just easier for me if I can go to Baby Gap, Gymboree, and Children's Place without having to walk very far but this sheds a whole new light on why malls should work to cluster stores!

I frequent the mall more than I care to. It is hard to avoid with a 14 and 13 year old. They know how to spot a sales sign and the clearance racks! Usually in the back after you have passed EVERY mannequin!

The last time we were at the mall I noticed that all of the female mannequins had nipples. I was annoyed... I asked out loud....
Why do all the female mannequins look like they are cold?!
My husband caught my drift right away.... and slightly ruffled that I ask these questions in public... explained to me and the girls that it was a simply the anatomically correct way to display the form of a beautiful woman.
So I asked..
Why doesnt she have a head?!

My girls understood my point even if he didnt.

Oh my god Anna you have me crying I'm laughing so hard. Your children's comments are priceless. I was laughing so hard and when your son came out with his line I scared my daughter because I about screamed so I had to switch to silent crying while consoling her. Absolutely loved this - and I'm an online only shopper; I only visit the mall to walk it early in the morning and am busy talking to the other moms with me. I'll make a point to look at their displays next time!

I remember walking by that particular Victoria's Secret when it first opened. I'm pretty easy going when it comes to the blatant sex messages that you see in retail advertising now - but even I was shocked by the VS displays. Manaquins in skimpy bras and "panties" rolling around in bed together...stripper mannaquins with POLES...it was outrageous. I was wishing I had my camera so I could prove that I saw it. Sure enough - the displays were changed by the next weekend. Public outcry and all... But I just can't imagine how they thought they'd get away with that at a suburban mall of all places!

I am with you on this one!! I never go to the mall unless it is by myself!!

Thats why I stay with TJ MAXX and Target.

By the way---where did you find that picture of me?

I love that last line. So funny. They probably won't be permanently scarred. Much ;-)

What is it with Abercrombie and Fitch? Yeah, VS has nothing on those guys.
We use the word panty around here. Underwear too...but panty makes me laugh.

I am totally an underwear girl. "Panties" makes me uncomfortable too. I think it either seems like a total little kid word or it has sort of an odd, dirty innuendo, and the fact that I can't decide which one it is only makes it worse.

Anna - I just about fainted when I saw that bikini clad girly on your blog. Whatever could Anna be writing about that required that sizzling picture? And then I read your post and it made perfect sense. My boys are way too young to realize the implications of a scantily clad mannequin but I totally know what you mean. I went in with my husband the other day on the way to our date night movie in the mall (we live LARGE!) and I was even a little embarrassed by some of the stuff they have in there!

I throw away my free VS panty coupon every time it comes. I'll start sending them your way, just for the blog fodder.

PS: I'm finding lace boy shorts from Target to be a good mix of still underwear, yet not granny pants. Covers everything nicely but still cute.

Boy do I hear you on that! I used to do my walking around the mall during the winter, with my young son in tow. I finally had to stop because I got so disgusted at the vulgar ads and billboards that were posted everywhere. And I live in Salt Lake City - the most uptight city on the planet!

Could you imagine if they had people dressed in their skimpies STANDING out in front of the store looking like that? They'd be arrested in a heartbeat. So why is it OK to post a life size picture like that? I just don't get that one!

I'm so glad to know someone else who is as weirded out by the word "panties" as I am. Eek! Found your blog through This Young House and have been laughing all week. :)