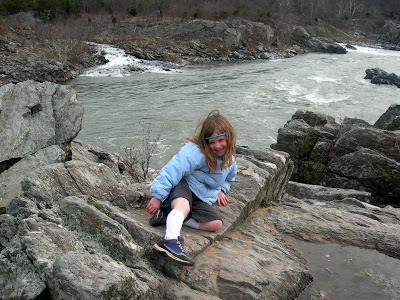 Molly is filled with disdain about my hair and my clothes. I really didn’t think this would start at age 7. Last week she said, “Mom, I really don’t think the “classic” ponytail is working for you” (her air quotes). I wanted to tell her I don’t feel the need to take hair advice from someone who wears her headbands in the middle of her forehead a la Xanadu or the Quacker lady of infomercial fame. Alas, I am the grown-up, so I refrained.

When we packed for the beach she asked if I was taking my hairdryer and flat iron. When I told her I was, I wanted to add my childhood refrain, “I’m doing it ‘cause I want to, not because you told me to!” As the grown-up, I kept my mouth shut. The one night I did forgo the ponytail to wear my hair down, she looked me up and down and said, “Way to go baby mama, loooooking good!” as if I had groomed myself solely for her pleasure.

It’s funny how fresh childhood seems, so I know why she feels the way she does, and I know it’s probably natural, but childhood is now far enough away for me to realize my mother was not the idiot I thought she was.

I think about the mortification of buying bras. At first my mom could just bring home training bras for my sister and me with no need to try anything on. I’m not sure what we were training for, but these bras had little purpose except to loosely cover up our “New Beginnings” as I had affectionately named the bee stings on our chests.

A few short months later, the New Beginnings needed new digs, so we had to go on a bra shopping expedition. My mother, sister and I crowded into a department store dressing room. As we tried on bras, my mother said embarrassing things such as “lean over and scoop” or “make sure you’ve wiggled down into it” as she advised us. Ugh. My sister and I could have died.

The worst was when she said in what we believed was an extraordinarily loud voice, “Don’t worry, they just look that way because you’re a little excited.” We wanted to crawl out of the stall, but of course if we did, people would be able to identify us, so we had to be satisfied just hissing at our mother to be quiet and stop embarrassing us.

Later, after my mom’s death at 46, I would cringe when I heard teenagers unleash vitriol at their moms at the mall. I wanted to scream at the girls to stop wasting their precious time together. I wanted to tell the moms to hang in there. That their daughters’ criticism was more about the daughters and the hell that is adolescence and the teenage years, than about their mothers. That, God willing, the time would come that these daughters would appreciate them again.

I know I could play the guilt card on Molly. “Don’t treat me this way, I could drop dead in 8 years and then you’ll really feel bad,” but I don’t. I know that her disdain is primarily developmental, and unless she’s being overtly disrespectful, I know I’ll probably bite my tongue and ride out her unsolicited fashion advice for the next 10-12 years or so. After all, I AM the grown-up. The frizzy haired, pony-tailed, gray-streaked grown-up who still misses her mom.

UHG! I just wrote this well thought out comment and then accidentally deleted it. I hate that.

The first thing I ever read on your blog was a post about your mom. This was just as funny and touching.

I have my own bra shopping horror stories - but the quotes from your mother are priceless! At least your sister was with you. "Because you're a little excited." That makes me laugh just to write it!

Th Hair Police -- I love the title. I stumbled across your blog, so I thought I'd add that I find my best styling tools at: http://www.myhairstylingtools.com/.Good luck with all future hair days.

I am in love with your writing.