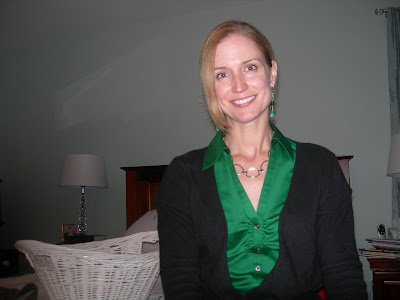 I was going to write about my annual shrinkage, in which I tend to lose 5 stubborn pounds every winter, through no virtue or effort on my part, only to see it land back soundly on my thighs each May just in time for pool season. I was going to regale you with tales of this squandered thinness from Nov-April a chilly time in which even I don’t see myself in a state of undress.

I was going to lament the 5 lb’s presence in mid-July when even the longest skirted swimsuit can’t disguise it. I was going to deliberate whether I should try to keep it off this time, by cutting back on ice cream and starting to exercise again. I was going to leave you with a wise, borderline profound and mostly sincere statement about how losing those 5 lbs does not bring me happiness, for happiness cannot be found in things. But I won’t.

Instead, I have the pressing need to write about something else. Psycho-Mom. I tried to leave her home from Molly’s class Christmas party today, but she snuck into the car with me. Two cups of Constant Comment tea and a Diet Dr. Pepper beforehand, almost as sure an antidote as garlic to a vampire, didn’t ward her off either.

This has been the unfortunate situation over the past few years on field trips and lunch duty, too. I try to shake her off, and sometimes I make it through the craft and snack portion of the party without her rearing her ugly head, sometimes I don’t.

Molly has expressed embarrassment at Psycho-Mom’s unpleasant outbursts. Other moms tend to turn away, much as you would from a train wreck, while sneaking the occasional peek.

Why am I the only bitchy mom in these here parts? The others have wonderful soothing voices and don’t seem driven to psychosis when 16 second graders are all yelling, “My turn! Pick me! She cheated! Me! Me!” at them. The other moms are pictures of serenity, genuine kindness, and Christian restraint. I think of Michelle Duggar, who gave birth to her 18th child yesterday and has never raised her voice to her kids.

I’d almost made it through the whole party when I decided to take the last 10 minutes to play “Christmas Pictionary” on the board. Bad move. There was not enough time for everyone to go, and they all crowded around shouting out answers. The crush of bodies at the board threatened to turn into a WHO concert, or another Black Friday tragedy at Wal-mart. Psycho-Mom was starting to sweat. The clues were too easy, everyone was right and everyone deserved to go next. Four children held dry-erase markers, poised to go. Kids’ eyes started to well with tears. Pure chaos.

By this time the other moms were checking out, cleaning up and vacating. I wish they’d left a few minutes earlier, before Psycho-Mom really spread her wings.

I don’t really know how to paint this picture for you, other than to say it stunk. Kids, knowing that not only was I a horribly unfair mom who had let her own daughter go first, started bemoaning the injustice of it all. The enforcers, key 2nd grade girls, tried to regain some semblance of control by bossing the other kids around, and complaining to me, not knowing how short Psycho-mom’s fuse could be.

When I finally lost it, I insisted they all sit down and I may, just may, have uttered in an extra-loud voice something as self-righteous and pouty as, “ Sit down! Mouths closed! I am hurt, even wounded, that you would be screaming and shouting at me during this Christmas party. Especially while one of your poor fellow students is trying, in vain, to draw our blessed Baby Jesus on the board for you to guess! What, I ask you, would Baby Jesus think?” Crazy mom on Aisle 3, perhaps?

I know when I don’t volunteer for Girl Scout outings, sleepovers and class parties I may look like an uncaring person, who leaves others to pick up her slack, but I’m starting to think that the best gift I can give this year is to avoid these events altogether. To the children, the teachers, and my fellow mommies, I am so sorry this took me so long to figure out.

Now this is great. I love the way you told the story and it is side-splitting funny. I can shed a little light on those sweet, even-tempered moms for you - they are medicated. Heavily. And I have always been of the mind that if I am willing to give of my time, my kid gets a little something out of it - know what I mean?

I wish I could take you out for a drink or two or three to thank you for being the Psycho-Mom for a class. I need one for just being a psycho-mom just for my three.

Pyscho Mom is better than raving lunatic bitch mom. Not that I would know anything about that.

I can't help it - it's funny. Great story and I bet those other moms, who appear outwardly calm and serene, were envying your telling it like it was to the kids.

Well, at least you're not pill-popping mom, or bitch-slap-the-kids mom, or smoking-in-the-car-with-the-windows-rolled-up mom. Those are way worse.

That's how I get through my day... thinking about, "Okay, I know I suck, but who sucks worse than ME???" LOL

"What would baby Jesus think?" From now on that's what I'm going to say whenever my kids exhibit poor behavior. I love it!

Excellent!! Why can't your kiddo be in my kiddo's class?

We could be psycho together - and make all the heavily medicated moms wish they could be us.

And Baby Jesus would give you a standing ovation, well, you know, if he could stand. Spare the rod and all that stuff...

Really, I do everyone a favor by staying away.

Schools should give me volunteer hour credits for just not setting foot on their street.

I learned a very valuable lesson after my husband and I took the older students my daughter's Christian School to a 3 day School Convention. What I learned was it's best if we Psycho Moms volunteer to do the grunt work or the go-get jobs....maybe be cleanup crew. Or if we're feeling calm and under control, lend moral support wherever needed. If that doesn't work, make tasty treats, pat our children on the head as they're leaving for school parties and at the end of the year, buy the non-psycho moms some amazing gifts.!