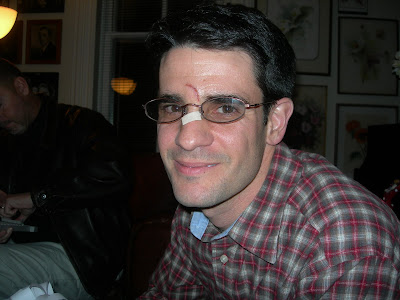 Ever since I put a picture of Tom on my blog with a big gash on his forehead, I’ve been meaning to tell you the story behind his injury. In hunter’s parlance, he “got scoped.” When I was in college, “to scope” was to check out hot guys. This morphed into calling all hot guys you liked your “scopes.” Well, this is different from what happened to Tom.

He was in WV hunting with my brother. I was at home seething because he always leaves me alone with the kids for the first part of Thanksgiving week while he takes this trip. It took me until about Wednesday to get over myself and realize that leaving a mom home alone with two toddlers is vastly different from leaving her home with a 7 and 9 year old who are in school 6 hours a day. I had also overlooked the fun of having cereal and/or grilled cheese for dinner each night and blogging until 2 am without feeling like I had to explain myself.

During this year’s hunting trip, my 11 year old nephew rose to the ranks of the adult hunters by bagging 3 deer. Tom’s pressure to perform rose too. You see, Tom was not raised in a hunting family. When he and I married, my brother and his fellow hunters welcomed him warmly and spread the love of expensive hunting equipment, copious amounts of fried food, and male bonding, but Tom was still on the fringe. What he needed was to bag a huge buck.

Over the years he has endured some teasing, most of it deserved. There was the year he took a novel out into the woods with him and was caught reading under a tree. Or when he got excited and shot a “button buck”—when he was supposed to leave it alone so it could mature into a massive beast. Another time he fell asleep and nearly got trampled by a herd of deer running down the hillside on top of him. My brother and his friends are Southern-ish good old boys. Burps, farts, dirty jokes. Tom is all Northern private boarding school. Reserved, tidy, preppy.

So, when Tom did take a shot at a deer this year, not only did he miss, he bashed his head in with the scope from his rifle. Blood everywhere. Wounded pride. A Harry Potter-like scar. Much explaining to do at work, at church, in the hood. It didn’t help his self esteem when my brother let me shoot a rifle off the porch at a target and I almost got a bulls-eye. Beginner’s luck.

Oh well, part of me wants him to start hating hunting since I’m not really in love with the concept and so we can all travel together for Thanksgiving next year. The other part of me wants him to get back into the game and keep trying. This will be a great example to the kids about perseverance, and who knows, he might even bag his elusive “Moby Buck.”

I'm with you on the hunting "concept" but I'm also with you on enjoying the luxury of doing and eating whatever you want at night without judgey eyes following your every move. SOME PEOPLE can stay up until 2 a.m. watching an Iron Chef marathon, but at the same time get irritated when someone else stays up until 2 a.m. reading blogs. This is the only reason that I kind of like those business trips that my husband has to take every once in a while...

I love the image of Tom getting caught reading a book when he's supposed to be hunting. It's kind of adorable.

I am all for hunting.
The men I know actually discuss such things as providing enough soy on their property to sustain a healthy population level. I have seen my father weep at the sight of a pregnant doe that had been shot. He has also been known to deny hunter access to properties for minor transgressions. The hunters I know are thoughtful and careful in their pursuit to secure a year's worth of healthy, low-fat, protein for their families... and expect the same from others.

I suppose I should say... I am all for hunting as long as someone else is pulling the trigger. My father still thinks that I have trouble getting the safety off. Each time a deer has crossed my path, I get it in my sights. But all I can do is see the beauty in the living animal. How can I pull the trigger when I am not even hungry? I have been caught with my nose in a book, too :)

Maybe I should also say that I am all for hunting because my husband isnt an avid seasonal hunter. He has all the pre-reqs: burps, farts, jokes, experience 'spanking' squirrels with bb guns and driving through mud holes. But he just isnt that into it.... mostly he likes another reason to drive the 4 wheeler through mud holes.

If your brother and family are interested in hunting closer to home let me know. I can hook them up with a wonderful group - including my father who teaches classes about wildlife and hunter safety - in central Virginia. One of them has even published a great venison cookbook. The downside.... their burps are as smelly as their farts and their dirty jokes make men blush... but, most importantly, if you dont respect the wildlife you will get chewed out military style.

Now he could probably supplement his income as Harry Potter interpreter.