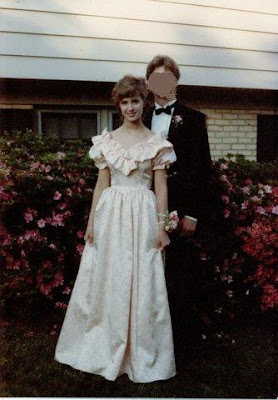 I was reading Texas Mama’s blog and was thoroughly entertained by her tale of her worst date ever. It got me thinking about which date in my life would qualify. I decided to count out the heart-wrenching “should we break up or not?” dates and instead focus on the date that, while not emotionally scarring, would blow the others away on a Crappy Date Meter. It just had to be prom, my sophomore year in high school.

At that point I had dated a few boys, but I wouldn’t call myself “experienced.” By this, I mean, I had never kissed a boy. The boys I dated may have thought it was because I was a “good Christian girl,” but it was really because I was afraid that if I tried, I’d suck. In a bad way. After a while, hesitation turned into phobia. For the same reason, I didn’t learn to ride a bike until FIFTH GRADE and I still can’t dive into a pool.

Therefore, I was as chaste as chaste can be. One of my boyfriends, dear Calvin, who would ride his little red mo-ped 5 miles through traffic across town to see me, eventually saw through my act and gently said, “Anna, if you are afraid to kiss me, because you haven’t done it before, that’s okay. There’s nothing to worry about.” I, in a haughty 14 year old voice retorted, “It’s not that I don’t know how to kiss, I just don’t want to kiss you.”

Ouch. I punished him for seeing through me, and 25 years later, I still regret those unkind words.

Sooooooo, by sophomore year I had some unresolved dating issues. My friend and confidant Nancy had an older friend who had to be in his 20’s at that point. Imagine my surprise as I answered the kitchen phone, to hear this guy, this man, offering me “his services” to work out “a problem he heard I had.” Ewwww. I was mortified and declined. Just thinking about that part of the story makes me want to lock Molly up for the rest of her life to keep her away from pervs like that.

Well, let’s get to the worst date ever. So, here I was a sophomore, with an active dating life—Pizza Hut, parties, dances, the movies. My preferred dating M.O. was to go out with slightly older guys who could drive. I had no intention of attending prom, since I was just a sophomore.

One day I got a call from an older boy in my church youth group. He asked if I’d go to his prom at the rival high school and I said sure. I didn’t know much about him, but he was cute and I figured he must like me and I’d just never noticed. I was actually closer to his mom that to him—I think I would have fared better going w/ his mom.

Despite some anxiety about the kissing thing, I pulled a ruffly peach gown out of my closet (it was 1985!) and was ready for the big night. I can’t remember what we did for dinner, but at the dance I was not my fun, bubbly self. I was not getting a flirty vibe from this guy at all. I was used to guys showing me attention. From him? Nada.

At one point I went into the bathroom because the ballroom felt hot and cold all at once. When I looked in the mirror, I saw a pale face, clammy skin, and my mullet-like hair plastered down with sweat. I wasn’t sure what was wrong but was determined to tough it out.

Eventually, we headed to his house for an after-party. This consisted of a 6 people, two of whom were my date’s ex-girlfriend and her date. If I had been more in-tune to current youth group gossip, I would have known my date and his hot and heavy girlfriend had broken up just a few weeks before the prom. I would have found it unusual that she would be at his house at all.

At this point, however, my head was pounding and I didn’t much care. My date continued to ignore me completely. As I sat on his couch with my eyes closed, willing the night to end, I heard, “Mmmmm, Oh yeah….. mmmmmm” coming from right next to me.
Yep, my date and the ex-girlfriend were making out on the couch. I guess somewhere between breaking up and prom, there had been some making up. The parents must have insisted they not cancel their prom dates. Gee thanks.
These two love birds could not bear to be apart on the most important night of the year. Eventually, they went outside to “talk” while the (no-longer ex) girlfriend’s date and I were left alone. Awk-ward.

Eventually, my date came inside and deigned to drive me home. He drove so fast that I got the distinct impression he had somewhere else to go, as in, “ditch Anna as fast as you can so I can put my tongue back down your throat!”
No walk to the door. No goodnight. He did slow down enough for me to get out of the car. Before I dragged my shivering butt into my bed I looked in the mirror. What did I see?

Thus ended the Worst. Date. Ever.

I’d like to add a footnote for those of you are wondering how this kiss-phobe ever became the mother of two beautiful children. It did take a couple more years to get over my “issue”—time and a few Bartles and James wine coolers did the trick. Thank you very much.

Oh how I love your blog! I, too, suffered from your kissing phobia. After having a quick first kiss from a youth group friend when I was 13, I was mortified to "go there" again until I was 16!!

Thanks for sharing. That was funny.

Inspiration for me to share my worse date too, so many to pick from, it will be tough!

You are rocking that fetching peach ruffled number.

And also, thank goodness for Bartles & Jaymes. Remember those commercials? They were the best.

This was GREAT! I had one of those dance dates that was really dating someone else too.

And I was also a late kisser - for similar reasons.

Oh - and the ignoring you thing was so typical of high school boy behavior. I hope you gave him chicken pox. (not really...but maybe a little bit)

Name one single problem that Bartles & James could not fix between the years of 1980 and 1987.

Oh My Word. TOTALLY hilarious! And, Chicken pox? That is priceless!

Bartles and James are my friends too. Nothing too tough that a little liquid courage can't cure.

Oh, one more thing... you are too nice to blur out that guys face. You should totally have left it - he deserves the shame!!! hee hee hee

I completely forgot about Bartles and James. The thought now makes me cringe with how stupid drunk I was in the 80s.

I wish you would have at least licked the guy - he (and she) totally deserved to be covered in pox.

LOVE the dress. Pretty sure I had one just like it in teal.

1.Our Website - is a great way to find new friends or partners, for fun, dating and long term relationships. Meeting and socializing with people is both fun and safe.

2.Common sense precautions should be taken however when arranging to meet anyone face to face for the first time.

3.You4Dating Free Online Dating ,You4Dating is a Free 100% Dating Site, There are No Charges ever. We allow You to Restrict who can Contact You, and Remove those unfit to Date.

4. You4Dating is Responsible for Creating Relationships per Year proving it is possible to Find Love Online. It will Quickly become a Leader in the Internet Dating Industry because of its Advanced Features and matching Systems,and most of all,Because is a 100% Free-There are No Charges Ever.