One of my closest friends and her husband founded a Christian school in New Jersey a few years ago. To illustrate just how close I mean when I say "closest friends," let's just say we were together during our Junior High youth group days a la mullets and short OP shorts, ardent bordering on obsessive devotion to the 1984 men's Olympic gymnastics team (Bart Conner!), were college roommates in the late 80's, and served as bridesmaids in each other's weddings.

After Jack's accident, my friend asked if she could share his story in a school chapel service. I said of course, as long as she wasn't trying to present Jack as perfect, but just a special kid who loved God and others. This spring she did just that. You could have heard a pin drop as shared about Jack's life and death. She read a Prayer of Thanksgiving he wrote, and many, many people were touched by what they heard.

But the neatest thing happened on her way into the service. She was praying and listening to Christian radio as she arrived at the school. A Chris Tomlin song called "I Will Rise" was playing. It deals with death and victory over the grave. Pretty fitting since she was going to talk about Jack's new life in heaven.

And I will rise when He calls my name
No more sorrow, no more pain
I will rise on eagle's wings
Before my God fall on my knees
And rise, I will rise

Listen to the entire song here


As she pulled into the lot, she saw a sight she had never seen at the school before, even though she was there every day: 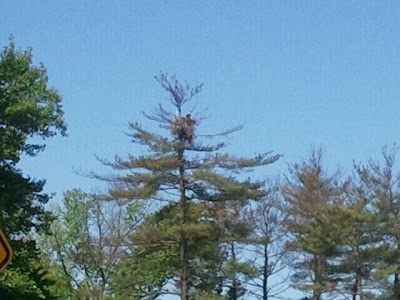 Yep, an eagle. A bald eagle. It was still there when she left.

Love my kid. Love God's creativity in sending us comfort. Love you for caring about us.

Email ThisBlogThis!Share to TwitterShare to FacebookShare to Pinterest
Labels: grief, nothing is impossible with God, our son, rare bird, signs from God

WOW! that is amazing, yet not astonishing after all of the rare birds that have been sent to you since the accident.

And now I will think of Jack when I hear that song.

I have been thinking of you. Speaking of rare birds, I have never seen redbirds in the summer. They are native winter birds here--and yet there is a redbird hanging out in a favorite tree out back. I think Jack is visiting: reminding me to get my buns back to church. I am listening. I am listening.

I am just amazed at the power of God and the signs He has sent your way so that you KNOW that Jack is with Him. I just don't know WHY He called him home so soon- xo Diana

As a worship leader at our church, that is one of my all time favorite songs to do on a Sunday and it is so absolutely fitting and uplifting for memorial services. Since reading your blog and knowing about Jack, that song has made me think of your family. The line that has always stuck out to me is, "My faith shall be my eyes," knowing that one day we will have the full vision.

I have never considered the rare bird reference, but now I will be thinking of that!

Blessings to you and prayers for many more God winks to come your way.

What a beautiful sign. God is awesome! The song is amazing, thank you for sharing it. ((HUGS))

Love this post! Love that song. I had it sung at my son's funeral last year. It never ceases to move me and encourage me. So glad you're getting signs from your Jack

Simply precious. Love it, too.

So happy for you.

I'm compelled to share this with you... thinking of you, always... http://www.gypsyink.com/2012/07/the-only-way-across-is-through-rickelle-part-2/

and then, as I was browsing a website about anchorites (early medieval monastics), I decided to check you blog, I read this post of yours, then I went back to my anchorite page and immediately ran into this: "eagle: precious agate in its nest to protect against harm, agate being equivalent to Jesus;"

Love You, Tim and Margaret. Praying for you everyday

That gave me chills! And God comes near again... Blessings and love to you!
Jen G.

Love this. Love you!

Yep, been thinking of Jack all year when I hear that song. I don't know how it could possibly bring you comfort, but I pray that it does. xoxoxoxoxo

Praise the Lord, O my soul,
and forget not all his benefits -
who forgives all your sins
and heals all your diseases,
who redeems your life from the pit
and crowns you with love and compassion,
who satisfies your desires with good things
so that your youth is renewed like the eagle's.

I feel like God is crowning you with love and compassion.

Amen! God will never stop caring or showing us signs of His love and comfort!
Love you! Karen

Anna that is so, so amazing. I have lost two family members and the signs from them from above continue to amaze me all the time. I believe. Jack watches you and is so proud.