We did some holiday decorating this weekend. I'd love to share it with you if I can figure out how to take a decent picture.
If you look at our nativity set, which sits on the same mirrored shelf that it sat on each year in my home growing up, you would see that Joseph has been replaced by some greenery and a silver ball.
Seems that the book wreath I spent 5+ hours making (!) fell, sending Joseph crashing down on our ugly tile floor.

Am I terrible to be inwardly glad it was Joseph, not Mary or Jesus? I mean now I feel like I can leave it up there as-is, but it would be just too weird to have only Joseph and Jesus there, or Mary and Joseph. By the way, I realize Jesus is missing a foot. That was a pre-existing condition. 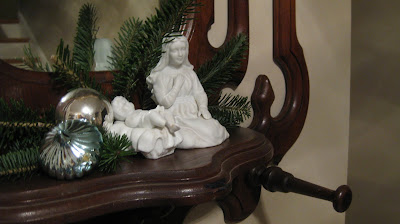 Poor Joe. Seems like he has always had it rough. Can you imagine what it was like for him down at the local bar when he had to explain that his fiancee had been impregnated... by GOD?
Yikes.
And now people like me act like he's a disposable part of the nativity. I shouldn't let my son Jake read this post because he just landed the part of Joseph in this year's church nativity play-- a non-speaking role, of course, in keeping with Joseph's quiet stoicism. Meanwhile, Molly gets to be the star of the play. No, really, the STAR, all twinkly and speaking-party and everything.
Oh well. I guess I could keep what's left of Joseph-- a head and two hands-- but the head looks a little too John the Baptist-y for Christmastime, don't you think? 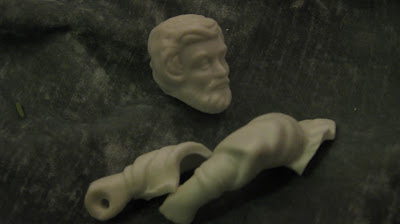 If you didn't have a chance to read my last post, on 10 of my favorite things, check it out here.

Email ThisBlogThis!Share to TwitterShare to FacebookShare to Pinterest
Labels: Christmas decorating, does Joseph get the shaft, nativity

Poor Joseph. Always getting the raw end of the deal.

Aww. What a crappy way to start the holiday...

I would have cried!

Just last week as we lit out first advent candle we talked about the essentialness of Joseph. What a man of character! Non-speaking? I think it's time your son learn the meaning of ad-lib.

LOL about John the Baptist here too. And Baby J's pre-existing condition.

I'd like to think Joseph would sigh and be all "No worries. I'm used to it."

Poor Joseph. Maybe you could take the army man off your steps and he could fill in.

And yes - I always thought he got a raw deal. Mary had a lot of splainin' to do...