I remember getting the phone call from Compassion International in 1994. They wanted to let me know that the little girl I had been sponsoring in Rwanda had disappeared.

Disappeared? It was hard for me to fathom how this could happen, because I couldn't yet conceptualize the brutality and genocide taking place in her country. At that point I could barely find Rwanda on a map, and I had not yet learned of the 100 days of chaos and violence that would pit neighbor against neighbor, proving that ordinary working people, including those who claimed to be people of faith, could take the lives of those around them.

Many months later, Mukanoheri-- the girl I sponsored-- was found and was able to return to her town. I continued sponsoring her until she became an adult.

Today, 16 years later, to say "Rwanda" conjures up images of violence, and if you are like me, you may wonder how people could ever heal from and move past such tragedy.

Personally, I think healing and reconciliation in the face of such despair requires a miracle. The good news is, miracles are happening there every day.

I'd like to share with you one business that is hoping that Coffee and Forgiveness, not Genocide, will be what you think of when you think of Rwanda.

A small Roswell, Georgia-based coffee company has been working in Rwanda to help farmers set up small coffee farms. Former enemies work side by side. Can you imagine a young girl growing coffee right next to the man who killed her family? It's hard to fathom, but it is happening in Rwanda today.

A "better than fair trade" wage is giving hope and a future, but forgiveness, despite impossible odds, is what is healing Rwanda. And if you are like me, you realize that forgiveness is just as important for the one doing the forgiving as the one being forgiven.

I know it's hard to wrap the mind around reconciliation of this magnitude, and I'm glad it's not our place to make miracles, but we can play a small part, and that's where today's giveaway comes in!

We have started carrying Land of 1000 Hills Coffee in the store where I work, and I'd like to give away a 1 lb. bag to you. 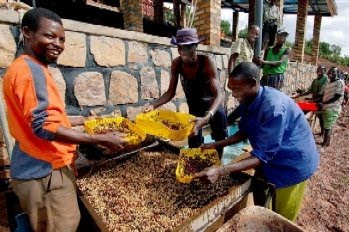 • Every bag purchased provides a rural farmer with a proper Living Wage and the dignity and self respect that comes from providing for oneself.

• In 2004, Land of a Thousand Hills committed to paying at minimum of $1.26 per lb. to the grower for their finest coffee, more than three times the unjust 40 cents often paid by other coffee companies. Currently, the growers are consistently paid an average of $1.86 per lb.

So leave me a comment by Tuesday at midnight and win some great coffee! Let me know whether you would prefer ground or whole bean. I encourage you to check out the website yourself. Land of 1000 Hills delivers the best coffee in the world, right to your door.

Wow...I am so glad that your sponsored child was found. And how admirable that you supported her for so long. Reading this post really makes me want to look into a program like that for our family. We donate to Heifer, but now that I'm a mom, the idea of supporting children means so much to me...

But back to the coffee. Ground, please. For Matt. I, myself, am not a coffee drinker; I prefer tea or diet pepsi, even at 630 in the morning!

What a coincidence -- I'm planning to give away a pound of coffee on MY blog on Monday! I always thought it was pretentious to insist on organic, fair trade coffee, but recently we attended a lecture on coffeemaking where we talked live via webchat with the grower in El Salvador. Hearing about the real-world effects on both humans and land really drove home the importance of these consumer choices. Now I'm totally converted. And even better when it helps bring together a divided society!

In other words, put me in for whole-bean, please. And do stop by on Monday -- maybe we'll both get lucky! ;)

What a wonderful cause and such a good way to empower and equalize those in Rwanda. I would love to win a bag of this coffee. Thank you for making me aware of another goodness in the world.

Great message! I'd like to win the coffee, but I'll be in your store to buy my own bag, so save the give-away for another reader. What wonderful ministries....

Great idea! Sometimes the overwhelming need in the world keeps us from doing anything because ....well because there is just too much to be done! But doing one right thing, sponsoring a child, is making a huge difference in her life & propbably those around her! Good for you!
I would love, love a bag of whole bean coffee!!

Thanks for writing about this!

My husband is from Roswell, and we live in Athens. It's all about 1000 Faces Coffee here! We love it!

such a thoughtful giveaway. what a story of redemption.
to sip coffee every day and pray for continued healing in a land ravaged by war would be a sweet privilege and even if i don't win, i'm sure i'll never sip coffee quite the same again.

What a fantastic project! I love the power of micro-economic loans. The idea that these can be used to heal ideological wounds and grief in Rwanda is a double blessing. We would love to try their coffee and will now look for it in our area. If we win your gift, we would prefer whole beans, please. Thanks for letting us know about this great product line!

This is a great cause and a great giveaway. I would like the ground coffee, please.

Hello..
a found a great place to find nice products at cheap rate at [url=http://50off.reviewazone.com/]discount code[/url]
Have Fun

Oh how wonderful! My little sister is in the process of opening her own coffee shop in our little hometown in Southwest Virginia. I will definitely pass along this new brand for her to check out!

That is so awesome. I will definitely check them out Anna - what a wonderful company!
Kiran

Me too -- I'll definitely check it out. Or maybe I'll be lucky and win, then post about it and my tens of readers will then check it out too. I've read a lot about Rwanda over the years but haven't done more than made a few monetary donations over the years. Good for you for both doing more and inspiring us to do the same.

This is such a cool idea....but I don't drink coffee, so I can't be involved, but thanks for sharing this with everyone! And how neat that you sponsored a child for so long....

What a truly awesome thing to do. I have no doubt that your kindness and love have made an impact on not only that girl but many more people.

I think all the blood in my body was replaced by coffee several years ago... it is what keeps me moving. Whole bean for me please and I will definitely be checking out their website. Thanks.

Anna - you amaze me. You were in your early 20s (the age of selfishness for most) in '94 and you were sponsoring a child abroad?

Anyway - you're one of the good ones. Put my name in for the coffee.

I also sponsor a child through Compassion. Getting his letters and drawings in the mail just make my day! I also love the coffee - whole bean. What a great project to support.

I would not miss an opportunity for a coffee giveaway (I love whole bean :) but more importantly, you touched on a huge topic - a wonderful one.

I am a huge fan of child sponsorship (way to get the word out on it - it changes lives!) but also, on the reconciliation that is taking place in Rwanda.

I was flying to Uganda last summer and met a man from Rwanda who was returning from the States where he had just earned his Masters' degree in Peace and Conflict Studies - and was on his way to work on the genocide reconciliation projects that he was a part of.

The coolest part - he was a former Compassion International sponsored child! His sponsor had passed away a few years prior, and he tearfully "thanked me" in place of his sponsor! What an investment...

Also - you are so right on regarding the unjust price of coffee! I watched a documentary called "Black Gold" that really messed me up regarding coffee. I only get fair trade now.

It's so good to hear about reconciliation...wherever it may be happening! Thanks so much for getting the word out. Seems to me that drinking a cup of that coffee would serve as a reminder each morning to pray for reconciliation in Rwanda, and wherever else it may be needed.

We support Heifer (my SIL introduced my kids to it many Christmases ago...they were engaged right off the bat) and we often buy coffee from a local who sources organic, fair trade beans. I have to admit, we were not tuned in at all to the developing world when we were in our 20s. Many kudos to you! And, we're whole bean people. = )

I would enjoy the ground coffee, but I really emjoyed your story. I'm currently reading a book entitiled "Common Grounds" about the history of coffee. Much like many of the industries in our country, the coffee growing industry has had its share of hardships. It's encouraging to see education and fairness being brought to the cofee growers.