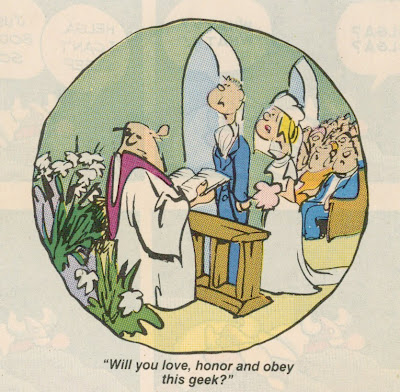 So I’m just wondering, did you marry “your type?” If you are married, did you have a preconceived notion of what kind of guy you would end up with or whom you gravitated toward during your dating years? If so, did you marry that kind of guy? How have your expectations been different from reality?

I always figured I would marry a frat guy type. Gregarious, with a slight beer gut, loads of stories, and the ability to throw me over his shoulder at will in a “get over yourself, Anna” kind of way. The kind of guy who would lean you up against the cinder block wall in the fraternity party room and slur with a little beer on his breath, “Man, you’re soooo hot!” Not sure where I got this from, but it’s just an image that stuck in my head.

Tom does not fit this mold. He is shy and reserved; he is proper and straight-laced. I outweigh him easily within a few short weeks of becoming pregnant, so there hasn't been a lot of throwing over the shoulder around here.

He is definitely not a frat boy. In fact, until we got involved in our church, he had just a few male friends, and he is content to spend a weekend at home rather than going out golfing our hanging with the boys. He does not curse, tell raunchy stories, and I don’t believe he’s ever uttered the word “hot”in the “smokin’ hot” sense in his life.

I remember when an ex-boyfriend visited me in graduate school and spent some time with Tom and me. Later, he proclaimed, “I just don’t think Tom is an ‘Anna Maiden Name’ kind of guy.” He even sent me the comic you see at the top of this blog post as some sort of illustration.

Puh-leeze! I mean, what was that about? I was in love with Tom! He was handsome, sweet, thoughtful, and extremely smart. Whatever the ex was trying to do totally backfired. Did this guy not realize that I have never NOT rooted for the underdog in my life, and he had just made Tom into an Underdog?

Didn’t he realize no one puts Baby, I mean Anna, in a corner?! A comic that criticized Tom? Ha. That guy might as well have gone out and bought the ring and booked the reception hall himself, because his insult sent me farther into Tom’s cute arms.

I think the ex did manage to peg that Tom and I are different. Sometimes those differences have been easy to navigate, sometimes more difficult. But even though Tom and I are opposites on the Myers-Briggs scale, and he may initially not have seemed like an “Anna Maiden Name” kind of guy, he’s the one I married, and after 18 years together, there are a lot of reasons why it works.

For one, there’s the whole introvert/extrovert thing. His quiet nature does not bother me. I realize now that I want to be the one with the loud, funny stories at parties, while he laughs along and is hopefully not too embarrassed .

I’m also a bit of a prude, so if anyone is going to be slightly risqué or raunchy in this family (by which I mean blogging about shooting one’s wad (of cash) or occasionally uttering the S-word) I’d prefer it to be me.

Also, Tom doesn’t schmooze, ever, so you are always getting the real deal. He might not be gregarious enough to be Pres of the IntraFraternity Council, but he is a loyal friend with great integrity. He is satisfied with our quiet life, and doesn’t care who knows whom, how much they make, or where they bought what. He also doesn’t get into gossip, which can be a bit of a bummer for me if I get in the mood, but it’s good not to have someone to feed off of.

Of course there are many reasons I love Tom, and certainly not just because he serves as a good foil for me. One of our old friends used to liken us to Dharma and Greg, which sort of implies I am a crystal-carrying ditz, but it does peg Tom as the mild-mannered type. I guess our friend just meant we complement each other well, and I believe that.

It also doesn’t hurt that he is H-O-T-T (lick finger, put it on your rear jeans pocket and insert sizzling sound here).

I could probably write a whole separate post for you on what I would suppose Tom’s “real type” is. I’ll take a quick stab at it here: a thin, doe-eyed, northerner with long, straight hair tucked under a baseball cap. Likes cooking, fine wine, the great outdoors, L.L. Bean and watching Planet Earth. Lives to cheer on her favorite sports teams and go to rock concerts. Prefers sex to sleep.

Good luck with that, Tom. Bloom where you’re planted, baby. 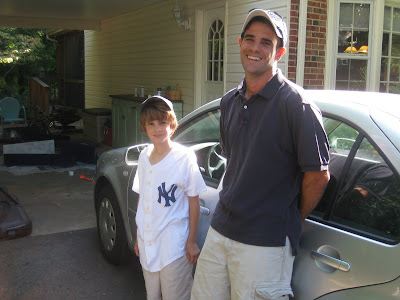 Great post Anna. I did not marry the "type" I had thought I would marry. My boyfriends in young life were all dark haired, Italian, Hispanic, passionate etc.
But after being burned I did not trust my self to choose anymore.
My sweetheart of 31 years is tall, thin, blond & so white he causes people to literally put sunglasses on when he wears shorts!

I can so relate! I'm an Independent, and I married a staunch Republican who's a gun owner, who loves stupid, stupid comedies. I definitely did not marry "my type." But he treats me so well and he is such a good guy. It somehow works.

"insert sizzle sound here." Love that. Your husband is mighty attractive. And he sounds perfect for you.

Sometimes I'll catch myself wishing my husband were different or would behave or react differently than he is inclined to...and then I realize that if he were, I wouldn't respect or care for him as much as I do. As much as I resent the fact that he can call me on my b.s., I find myself feeling grateful to him for doing so.

Dang, Anna. Your Tom is HAWT!

My type is: HUGE. I dated a guy who was 6'8" in college. After he broke my heart, I married a guy who was 6'5" and incredibly smart. I guess I traded a couple of inches in height for a few more IQ points. It was a wise tradeoff.

I can count on him to help me win any Trivial Pursuit party, and me loves winning!

What a great post Anna. I loved this little insight into your relationship! I, thankfully, did not marry the type of guy I generally dated. I did, however, marry the type of guy I HOPED and PRAYED I would marry. Before "The Secret" even came out I wrote out a list of attributes I really hoped to find in my mate, and I meditated on it daily. Seems extreme, doesn't it? But it worked. My husband is a quiet, kind soul, foreign, so big and tall he makes me feel small, much smarter than me (he's a scientist working to cure cancer!), and an introvert without a huge gaggle of friends...I could go on and on, but he's just perfect for me. We're best friends and I am so lucky we met!

hm. i think i had something funny to say before i saw that last picture but now all i can think of is...jeesh. tom IS hot.
well done.

That Tom is a keeper for sure!

I don't know if I ever knew what my type was. I definitely knew what it was not. The man I married was not at all the kind of guy I thought I'd ever be attracted to. But what do I know? My guy gets me and lets me be me. I think I do the same for him, although I will probably never join him on the couch for an afternoon of The Three Stooges.

Actually, my story is quite the reverse. All my life I dated the type that is opposite of me. I enjoyed being the "pants-wearer" of every relationship. I called the shots, I was boss. I had the power! Now, my hubs is exactly like me. We share the power. I've absolutely learned a thing or two or five. It's probably the reason none of those other relationships ever worked out but this one did!

Um... sizzle sound accurate...now I feel weird. Anyway, my partner is not my old type: artsy, underemployed, tortured, funny and sweet until drunk, better-looking than me, ends poorly. This one's different and has lasted longer than all the others. We're still not convinced we're definitely going to make it but we still want to try. We can drive each other crazy but he is a kind, decent, smart, hardworking superdaddy type who doesn't play games.

I think we often don't end up with our type. I know I didn't. Definitely not in the looks department. I was never into guys with dark hair - and my husband's hair is black. But at this point, I can't even remember what I thought I was looking for... I think Chris embodies some of those things, completely misses the mark on others and then throws me some surprises that I would never have expected to value.

I KNOW that I'm not his type. Again with the looks - tall, buxom and a head of black curls? Yeah - not so much. And I'm sure he's not loving my own prude streak. But I hope he's learned to appreciate my other good qualities!

Funny and sweet post. I loved the HOTT sizzle quote too. Hopefully, your hubby read this one. (:

I think I married my type, although I thought at some point I would marry someone like my dad. It turned out my personality is more like my dad's. So hub and I have a ying and yang thing going.

you are a hoot! i love your blog! i never really knew if i was searching for a "type" i met my husband when i was 18 and he was in college- which at that point was awesome considering my history- he's turned out to be quite alright!! and your description of your husband's ideal partner sounds a lot like i would imagine my better half's to be....too funny

It does seem to work to be married to an opposite.

The H-O-T thing is pretty obvious from the photo!

Thank you :) look at this emo boy one on this blog:
http://emo--boys.blogspot.com