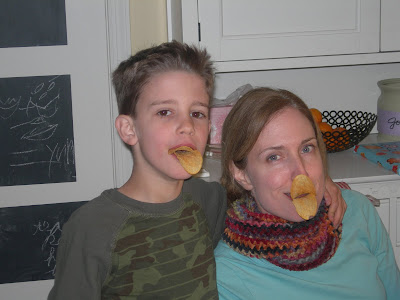 My mom had a dose of zany in her. Whenever we got a new jar of peanut butter, she dared us to be the first to scoop out a big hunk—with our fingers. She was right in there, trying to be first, too. Sometimes on car trips we had just Dairy Queen cones and gumdrops for lunch.

She let us play a game in the house that involved chucking tennis balls, hard, at each other, as long as we blocked the windows with furniture. When she had to take us to sports practices or rehearsals, she would lean her seat back in the car and instantly fall asleep, no matter who could see her. She sat cross-legged on the kitchen counter as she talked to us. She said “shit.”

Instead of yelling at us for being irresponsible and taking good spoons out into the sandbox, she offered us and our friends 25 cents for each one we found and returned, $1.00 for sterling silver.

One time when the three of us kids were fighting like banshees, she kicked us out of the house, each with a ceramic bowl—telling us that if we were so mad, we could not come inside until our bowls were broken. Fighting turned to bewilderment. Had she finally lost her mind? I was reluctant to do something so utterly wrong, but I eventually broke my bowl against a tree and was soon laughing my head off with my brother and sister.

I thought Mom was cool. This is at the same time I thought she was the weirdest, most old-fashioned, strictest, most embarrassing clog-wearing mom on the planet.

I hope to strike this same balance with my kids. I instituted “Ice cream for Breakfast Day” for the first snow day of every year. There’s never much risk, with the way I eat, that we won’t have ice-cream in the freezer. And, since school most likely is cancelled anyway, there’s no fall-out from all that sugar.

I also make up songs in the kitchen, dance like Pee Wee Herman, engage in lots of potty humor, and talk like a Valley Girl. I wear dorky get-ups around the house, and drive the kids to school with last night’s mascara half-way down my cheeks.

I want to be zany, but in a safe, “I’m still the mom” sort of way. I’m sure we all had friends with the “other” kind of cool mom. You know, the one who hung out playing quarters with the teenagers at parties because she’d “rather have them drinking safely at home” than somewhere else. The mom doing the beer bong. The one who gossiped about who should be cheerleader, and why her daughter had been “robbed!” of the honor.

That other kind of mom always freaked me out. My mom was not that mom. Our drama was not her drama, and she didn’t drag us into any drama she was dealing with in her own life. She lent a sympathetic ear, and dished out hugs, but she let us deal with our own stuff.

If our friends betrayed us, she didn’t call their parents and chew them out, or tell us why we were so much better than they were. She didn’t get involved in who was dating whom. I remember thinking, although I couldn’t put it into words then, that she showed remarkable restraint.

She didn’t label, and she didn’t name call. This made me feel safe because I knew that even if I was the bitchiest bitch ever, or the biggest baby, she’d still be there for me. Instead of screaming at me when I freaked on her, she would give me a sort of wide-eyed, bemused look that said seemed to say, “Uh, yeah, you are acting like a huge ass right now. I’m going to keep my mouth shut. I’m sure you’ll realize the error of your ways before too long.” And I did. No berating, no negotiating, no pleading. She was the mom and I was the kid, and I felt safe knowing that my childish behavior might not make her happy, but it would never rip her world apart.

My mom attracted teens to her, around the kitchen table. Not with beer bongs, but with plates of nachos and a listening ear. If they were boys, she cut their hair using her barber clippers in the middle of the kitchen. She took the exchange student to get birth control after telling her that although she didn’t believe in premarital sex, she would do what the girl’s own mother would do for her if she could be there. She figured out how to make international long distance calls, just to be sure. Did she mention any of this to me, her curious, gossip-loving daughter? Nope. Restraint again.

Kids crave structure, and when we have rules and structure and standards, they feel safe. It’s when they feel safe within these constraints, that we are able to get a little zany. Not "unstable, no dinner, different men in the house, out-all-night" zany, but just a little bit more fun than you would expect from mom on a given day.

I may be more yell-y and psycho than my mom was (maybe I should just start saying “shit” to blow off some steam), but I hope some of her fun rubbed off on me.

So if it’s letting the kids take the cushions off the couch to jump on every night, having ice cream for breakfast, teaching them the diarrhea song , or grooving out to Dance Dance Revolution, I hope my kids see me as FUN MOM. Just not in that order.

This was great to read after hearing how much more fun the mom of another kid is than I am. It is too soon to tell, but I am hoping that my mom/fun ratio is balanced in a way that is good for all of us. Do I get points for already having said "shit" in front of my elementary schoolers?

Wow, you continue to amaze me. Your thoughts are introspective and your writing is super dee dooper. Here's how I know that... normally a post like this would cause me to drift off while reading, and I'd start thinking about myself, how to be a more fun mom, if my own mom was ever fun, etc. But with your post, I kept reading and enjoying it and not losing focus at all. You kept me drawn in. You're a really great writer, anna.

I love it when you write about your mom! Those are some of your best stories. I'm sure you are "fun mom" and I so get the differentiation between the mom you had and the mom that wanted to relive her teen days... I always felt a little uncomfortable with that.

This would make a great newspaper clipping to put on every mother's fridge. Be "fun" not "cool." There's a huge difference between those two types of mothers - and yours sounds so ultra fun.

Anna, I still wish I had your mom!

Oh, I love my mom. And I have fond memories of her being fun-zany during my first ten years. She could belt out every verse of "If ever you see a hearse go by.." and "Nobody like me, everybody hates me, think I'll eat some worms..." She taught us the bump and the twist. She loved Bill Cosby... leftover cake was a reasonable breakfast choice whenever it was available. We never had store bought cookies and rarely store bought bread... I always loved it when I got a turn to knead the bread.

But she got confused by the 80's feminist messages. While she sincerely believed she was offering an example of being true to herself, it turns out that she was trying on the wrong kind of zany. "Unstable, no dinner, different men in the house" is a fitting description. And, yes, it was a time of anxiety and insecurity. Did some of my friends envy my 'freedom'? Maybe. But, that kind of zany isn't fun for anyone... not even mom.

This blog would be hard for my mom to read. She has such regret. But she frequently remarks that she is so thankful that I managed to make such quality friends... and recognize them. She was thankful for you in my life. My mother remembers your mother fondly. At her second wedding, she felt extra blessed simply because your mother arranged the flowers.

Thank you for sharing your mom again!

This has to be one of my favorite blog posts ever. We all do our best to be the "perfect" mom (sometimes realizing that the best thing to do is to be imperfect), but your lovely tribute illustrates that there is not a mom template we all need to follow. We need to find our own way, be true to ourselves and our children, while providing them with the structure, comfort, security and fun they need to find their own ways in the world. Thanks so much for sharing.

What a fun read. I have no doubt that you are Super Fun Mom and that your kids and their friends are just as crazy about you.

Anna-- This is my favorite blog so far. Really wonderful. I thoroughly enjoyed it. ~Kathy

I strive to be that way....but my kids are still pretty young so I still have to be pretty hard-core some times. I'm hoping that we can get to the other side soon, and there will be more good times than bad in the future. :)

My printer is running right now (hope that's cool) - I LOVED this!

I so want to be the "fun" Mom, but letting go sometimes is very difficult. If you knew MY mother, you would get it.

Thanks for such incredible words - inspiring.

What a role model - I want to be like your mom, too... who doesn't? Amazing read. LOVE