Yesterday I hired a babysitter, Nadia, so I could write run errands.

At the last minute, a workman I've been trying to connect with came over, so I had to stick around. Our twice a month cleaning lady, Marie, was also there. So, for an hour or so, we had a full house, and Nadia and Marie had a chance to chat.

Later, Nadia said to me, "Marie says Andrew looks just like your other boy did. She says he was very clever, and Andrew is clever too. See? We don't know how God works. You are lucky. Lucky!"

The word lucky struck me as a little off, but something could have been lost in the translation. There were several languages in play as Marie and Nadia, two women of faith from distant parts of the world, admired and talked about the baby.

With my story, I don't know if anyone would call me "lucky."

Besides, lucky sounds so random.

Christians tend to use the word BLESSED instead. Blessed is a way to say, "I don't think this is random, but it also doesn't come just from my own hard work or striving." When Christians say they are blessed, to describe a new house, car, job, and, yes, even their children, it's a way of expressing deep gratitude...but it can also be problematic. This article sums that up pretty well.

It makes me think of when people say, "There but for the grace of God go I," in describing terrible things that happen to children. I get that this sentiment is a way to connect, to say, "Hey, what happened to you could have happened to anyone!" But it can also make a person feel as if she's somehow outside of God's grace when terrible things do happen.

And of course that's not true.

Words can be confusing.

In speaking to groups, I sometimes unpack my troubled relationship with the verse: "Blessed are those who mourn, for they shall be comforted."

I didn't feel blessed to not have my mom at my wedding.

I didn't feel blessed to have Margaret lose her very best friend in a stupid creek.

And I didn't feel blessed last week when Jack's precious classmates generously gave up a Sunday afternoon to meet Andrew and spend time with us. Instead, I felt stricken and depressed, missing spending day after day with these kids whom I have loved since they were 6 years old, and hurting so much that they are about to go to off to college and more new adventures without Jack.

In Jesus's upside down view of the world, however, grievers ARE blessed.

Why? Not because they are free from pain, or they receive some sort of material or physical reward for the hell they've been through, but because they will receive comfort, often in the form of love from others, and always in a spiritual way from God himself, who never leaves us alone in our pain.

Time after time I have been comforted in my grief. I now know this verse is true.

And I think every baby is a blessing, an undeserved gift for which to be grateful. But I don't know why some people who desperately want children are not able to have them. Is it random? Is it luck?

Back to the babysitter's words. Am I lucky to have a baby in the house when I'm 47? Andrew's surprise appearance certainly defied great odds.

Am I blessed? Yes, if being blessed is really another way of framing the word GRATEFUL. And does it ease some of the pain of losing Jack that Andrew, with the exception of his eyes being almond-shaped to Jack's round, looks just like his big brother? Does buying little boy clothes again, wiping a baby boy tush, and getting Jack's wooden trains out of storage feel somehow redemptive and healing?  It sure does. That's what the baby sitter was getting at.

For I do still mourn, and I am comforted. God can do that, and I believe Andrew is one way He's doing it in my life. 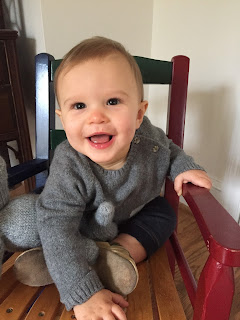 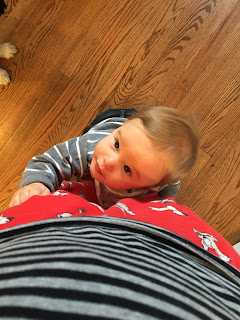 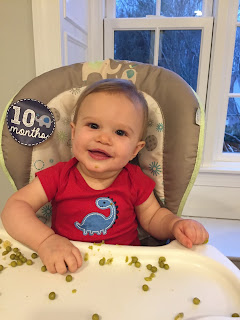 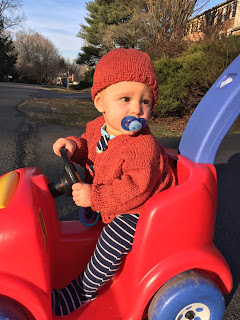 Email ThisBlogThis!Share to TwitterShare to FacebookShare to Pinterest
Labels: baby bird, blessed, blessed are those who mourn, child loss, faith, grief, Rare Bird: A Memoir of Loss and Love

Yes, comfort comes in many forms. Thank you for putting into words my thoughts and helping me make sense of so many things.

You said this so well. "Luck" is such an interesting concept to me. But yes, that sweet boy is for sure some pretty wonderful comfort, I would assume. <3

I agree with your view of being comforted. Thankfully the Comforter is always close.

This made me cry tears of aching and joy.

Perfectly said. "Comforted". Yes. I'm so glad you feel comforted. And that beautiful baby makes me laugh out loud each time I see him. He's precious.

Thank you. Comforted. I like that. I cringe a lot at the word blessed. It's so overused, and as you said, what about those who aren't blessed with a baby or something else they desperately need or desire? But comforted.... yes. Our grandson has comforted us after the loss of our son.

It is so always so interesting to read about your grieving process. I have learned so much from you, that when my turn comes to grieve a significant loss...and I know it will come....I will find comfort in having gone through this with you.

Your new baby is wonderful and I hope you are doing well.

I am in an intense period of grieving over hard health news over my preemie son and an uncertain future. It is reveling lies I have believes about God and suffering. I would have never thought I believed that if I am godly than suffering shouldn't happen to me. But here I am in the midst of such deep pain and helplessness and that's where I am going. The circumstances that have caused each of us to grieve will most likely not change and remove the grief. I really like that we receive comfort to help us through. Thanks for sharing this.

You have such a wonderful way with words and expressing complicated emotions. Thank you for sharing. I have always struggled with the concept of and the word "blessed." It actually causes a visceral reaction that causes me default to the word grateful. I love that I now have another word to use that feels right - "comforted".

I always love your posts. Thank you. What a beautiful baby boy. And I too have never liked the phrase "there but for the grace of God," because it does seem to say the other person is out of God's grace. Wishing you peace and rest.

Yes, I'll take "comforted." And that little Andrew is magnificent.

Such a powerful analysis that really makes sense! Thank you for being so thoughtful. I'm an engineer that thinks through complicated systems and issues each day so it doesn't always leave time or energy to think through philosophical things like this. And maybe my brain just isn't wired to make these types of connections so gracefully! You have a gift and thank you for sharing!

You are gifted and wise. Comforted. Perfect.

Your words are always perfect. I liked reading this post. I am lucky to know you.

I want to say 'Again, beautifully written,' but that doesn't quite get at it - it is more 'Again, I apprehend your beauty, and how open a channel you are for what is beautiful.'