You know how much I love doing giveaways here at An Inch of Gray, and I'm super excited about this latest one!

When Andrew was born, we couldn't believe how much better sleep solutions were for babies than 15 years ago. We had user-friendly swaddles that he couldn't break out of, and he slept right next to our bed in a Rock and Play Sleeper. Total game-changers that meant more sleep for baby, Mom, and Dad!

As Andrew hit the 5 month mark, Tim and I got really nervous. We knew that it was just a matter of time before he would start to roll over in his sleep, and we'd have to discontinue the swaddles and the Rock and Play.

We were seriously stressed about how to move him to a crib, because we just didn't have the energy for an ugly, protracted transition.

I started researching on-line and found something called a Zipadee-Zip. You may remember when I mentioned it in an earlier post about how I love As Seen On TV products. Yes, Sleeping Baby, the company that makes the Zipadee-Zip was featured on one of my favorite shows, Shark Tank.

Here's the video from their episode!

Zipadee-Zip is a sleep sack that allows babies to roll onto their tummies and back again because their arms aren't constrained. It does, however, give them much more of a confined feeling than pj's  or other sleep sacks, and this resistance helps keep them asleep longer. It was invented specifically as a solution for the swaddle to no-swaddle transition.

Tim and I are grateful that the Zipadee-Zip helped Andrew make the change to his crib. We were expecting him to FREAK OUT for at least a week, but he got used to his crib in just a couple of days. Almost 6 months later, he still wears the Zipadee-Zip every night and during his (infrequent) naps. They help him feel secure, signal that it's time to sleep, and help keep him warm since babies aren't allowed to have blankets in the crib. Another way I use the Zipadee-Zip is as a cover-up in the doctor's office or other public places where I don't want him to get too germy, and as an extra non-bulky layer in the car seat or stroller.

Here he is taking a snooze in his at the DMV while big sister got her learner's permit. 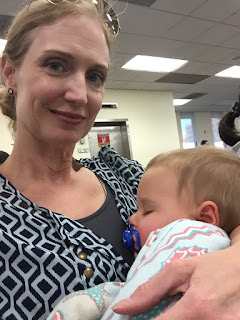 He has one with a seashell print, and a fleece one with foxes on it. So cute!

When Andrew no longer needs a Zippadee Zip, I plan on getting him The Flying Squirrel, fun pj's with a similar shape and feel that fit kids well into elementary school, but I'm not in a rush. A lot of parents keep using the Zipadee-Zip up until 2 years old or when transitioning out of the crib.

You can use it with just a diaper or a onesie underneath, but since it's winter, we put it over Andrew's pj's. Doesn't he look so happy to have just woken up? 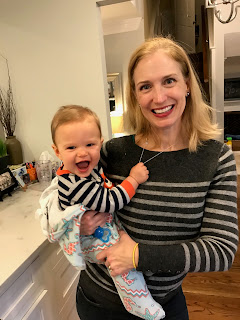 Sleeping Baby has offered to give a free Zipadee-Zip to one of my readers. If you do not have a child or grandchild in the infant to toddler range, please share this giveaway with those people in your lives who do!

I want as many people as possible to hear about this product that helped me so much!

Entries limited to the Continental U.S.


Thank you, Sleeping Baby, for sponsoring this giveaway!

I have a swaddle loving 2 month old who sleeps (you guessed it!) in the rock n play next to our bed. I've already been looking into the Zipadee Zip to help when it's time to transition him.

I'm entering for my neighbors who just had a baby! Wish these were around (or I knew about them) when my kids were little.

My grandson is just now 4 months and has transitioned from a confining swaddle to a less restrictive one and he is just the best sleeper. He'll be needing another swaddle soon as he is growing like a weed!! Almost 17 pounds! ��

I sleep tucked in, although do have to stick a foot out once in a while when I overheat! First grandbaby coming soon - would love to win!

I would love this for my almost 4 month old daughter!

All tucked in! Love the Zipadee Zip - it worked great as a transition from the swaddle for us. Would like to try the Flying Squirrel next.

My baby is currently 6 weeks so I know we will need this eventually!! Thanks for hosting a giveaway!

I have a two month old grandson and this looks like it would be a good transition for him.

Tucked in in the winter and feet out in the summer!

I like to be tucked in, and my husband thinks I'm weird because I sleep with a pillow over my face.

I like to be all tucked in. I have a family friend who just had a little boy, I think she would love this!

I'm hoping to win for my cousin. She just had her 4th child and she hasn't had an infant in eight years. He's a preemie and she would so enjoy this.

I like one foot out :) My baby is almost 5 months and we are trying to transition her out of the swaddle. Ive looked all over for a zipadee zip at my local consignment shops and posted on swip swap iso one.I was so excited to see your give away!

one or two feet!

This looks great! Would love to win one or these. Thanks for sharing!

All tucked in and cozy to the chin!

One foot MUST be out from the covers!

This would definitely be a great swaddle for the older ones. My grandson stayed in them for while.. He needed this one!

Entering for my friend who has a 4 month old. I like to be all tucked in!

I CANNOT sleep with my feet covered. Daughter is the same way. When she was a baby, the only way I could keep her feet covered was with a similar baby sleep sack. I'm wondering if our little guy (due in May!) will be the same!

I CANNOT sleep with my feet covered. Daughter is the same way. When she was a baby, the only way I could keep her feet covered was with a similar baby sleep sack. I'm wondering if our little guy (due in May!) will be the same!

I have a four week old. I would love to try this when we transition to the crib.

We love swaddles and I need my feet out when I sleep!

I sleep with one foot in and one foot out of the covers.

I love to be tucked in. I'm entering for our 8 month old who loves to suck on his pajama sleeve in order to fall asleep. I think this would be perfect for him!

My bother and his wife just found out they were expecting. I can't wait to tell them about it!

Baby number four is joining us in August, we've heard great things about this product!

I have to be all tucked in completely!

not entering the contest -- just wanted to say you look beautiful

I have a four month old grandson who could use this from swaddle transition.

I LOVE those pictures!!

I liked to be all tucked in!

I have to have one tucked in and one out. I am a weirdo. I am so interested in checking this out for my 8 month old!!!

My best friend is expecting twins in less than a month. This would be so perfect for her to try! So excited!

We are trying to figure out how to transition our 10 month old to his crib...This could be the answer!

Tucked in... with my feet out!