Get Off the Bus, Gus! 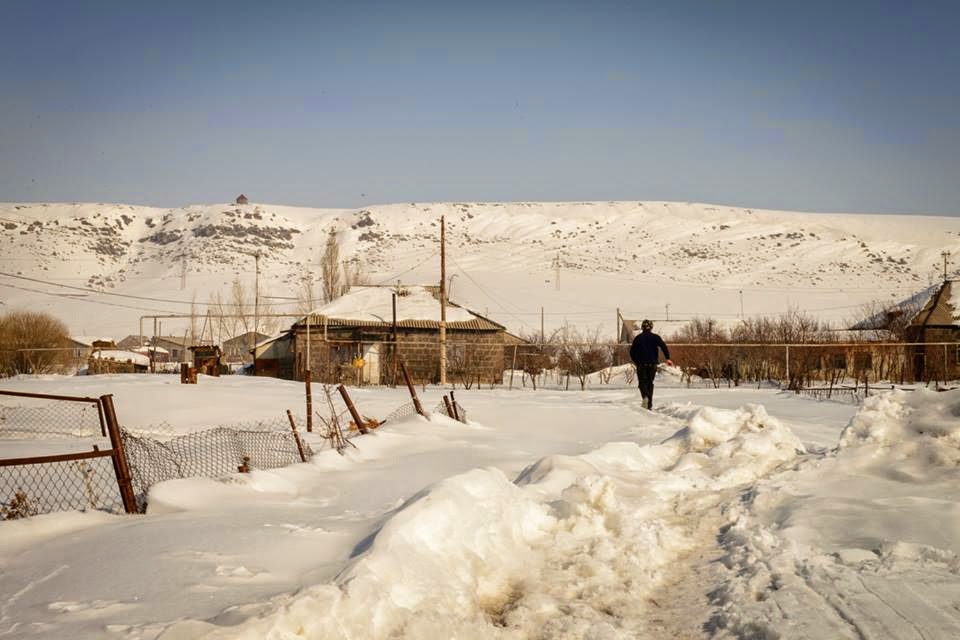 I could have stayed on the bus.


No one would judge me for it, and there would be plenty of opportunities to connect with other Armenian families later in the day. I knew today’s story didn’t need to be THIS story, of a 12 year old boy in need of a sponsor.
I got off the bus, but you probably knew that already, didn't you?


You knew that even though life is hard, opting IN is what helps me. It’s what keeps me going and tethers me to the world in a healthy way that I could not have taken for granted just a few years ago.
I had read a little bit about Nikol’s family early this morning, and I wanted to learn more, so I walked up the snowy path past the huge haystacks and into Janet, Andranik, and Nikol’s stone house. It was spacious in comparison to the house we would visit next, which was actually a cramped metal boxcar intended for temporary use following Armenia’s earthquake 27 yrs ago, now all these years later serving as a permanent home for a family of five.

But Nikol’s stone house, while spacious, is falling down around the family, who can not afford to make repairs. In fact, Nikol recently changed where he slept because he is terrified the roof will cave in on him in the night. 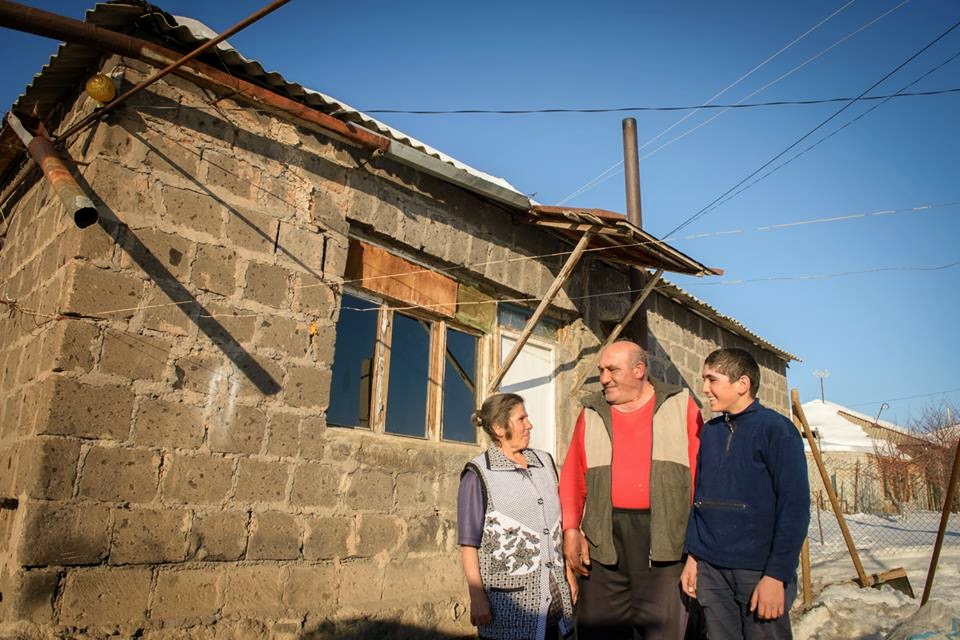 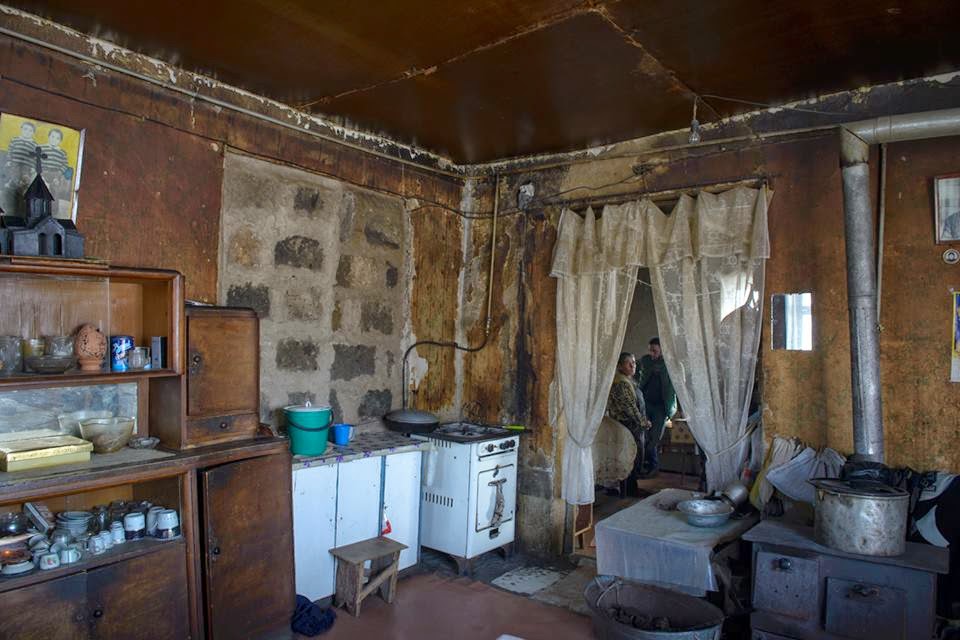 I’ve joked a bit about my age on this trip, as I am quite a bit older than the other bloggers. I mean, I can’t believe I worried whether or not I should wear skinny jeans on the trip. These young bloggers are hip. And my use of the word "hip" just now pretty much shows that I’m not.  However, when I meet Nikol’s parents, who are 52 and 56, I would not have been surprised to learn they were in their 70's or older, so harsh have the years been on them. 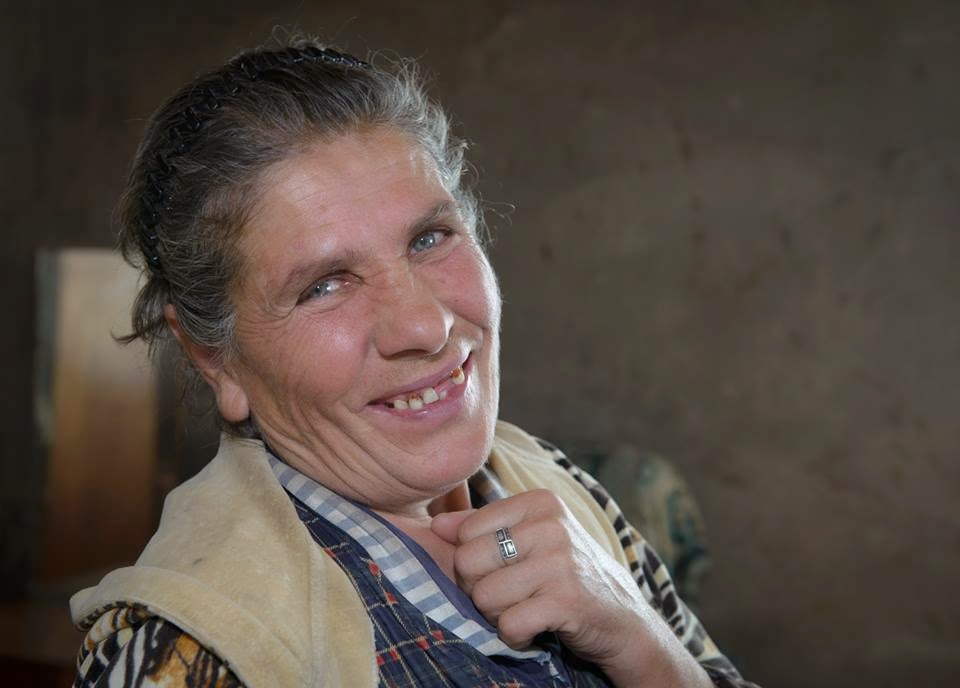 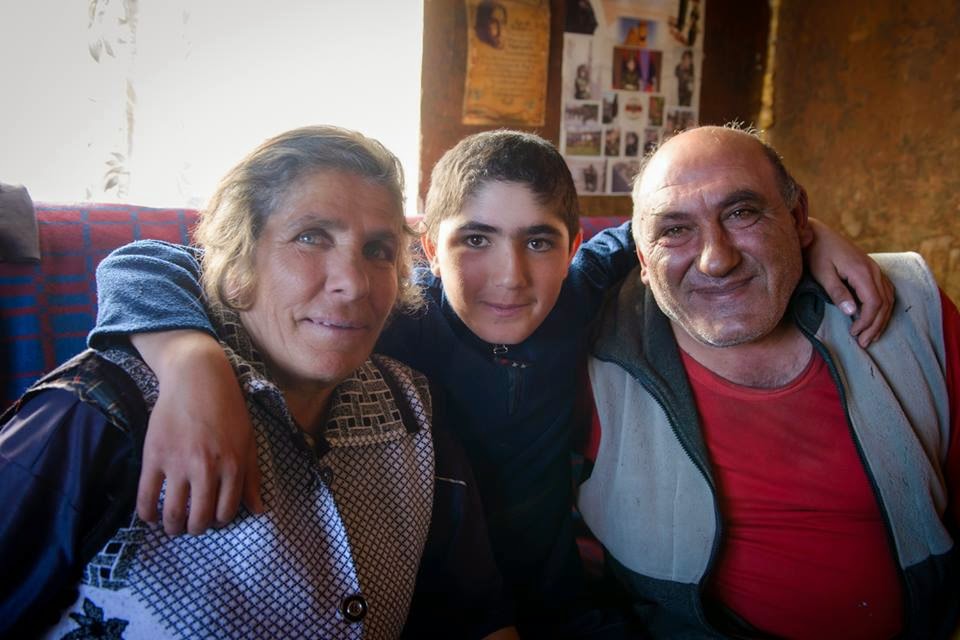 As it is, they are as old as many grandparents in the region, and it is a cause for regret that they are barely able to feed their family at this stage in life, let alone spend money doting on their adult children and grandchildren.  As part of the old guard who remembers living under Soviet rule and having all of their needs met, Janet and Andranik find their current reality hard to fathom, let alone accept, but they have no choice.
Despite various physical ailments, they, along with Nikol, walk to a neighboring area twice a day to care for someone else’s farm animals. There they are surrounded by manure, but are not allowed to take any home to heat their house. 3 hours of labor in the morning, and 3 in the afternoon, done by the family together, yields a total of $1.40 a day. Enormous debt the family has carried for years (with interest rates up to 36%) looms over them, spreading a feeling of hopelessness and despair. When winter is over, the cows will be taken elsewhere, and that meager job will disappear. 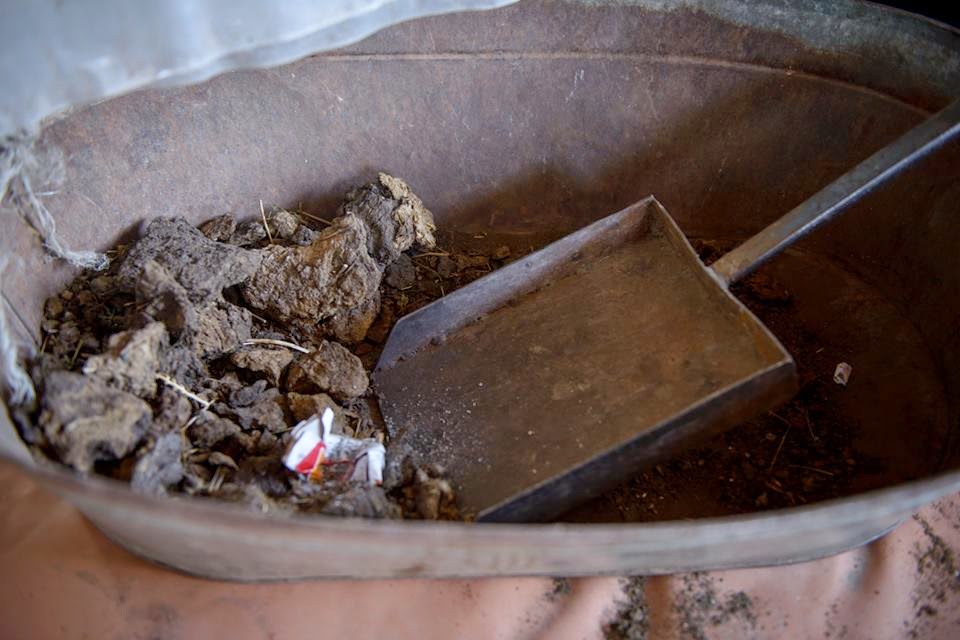 Yet here is Nikol, with his huge brown eyes and ready smile, who shows us some Judo moves (doing a few on me at my request), plays a few notes for us on a Euphonium, and tells us about the World Vision summer camp he attended last year. He is playful, respectful, curious, and kind. Our guides will tell us later that it is hard for him to make friends because in such a small village, his abject poverty sets him even further apart from his peers. 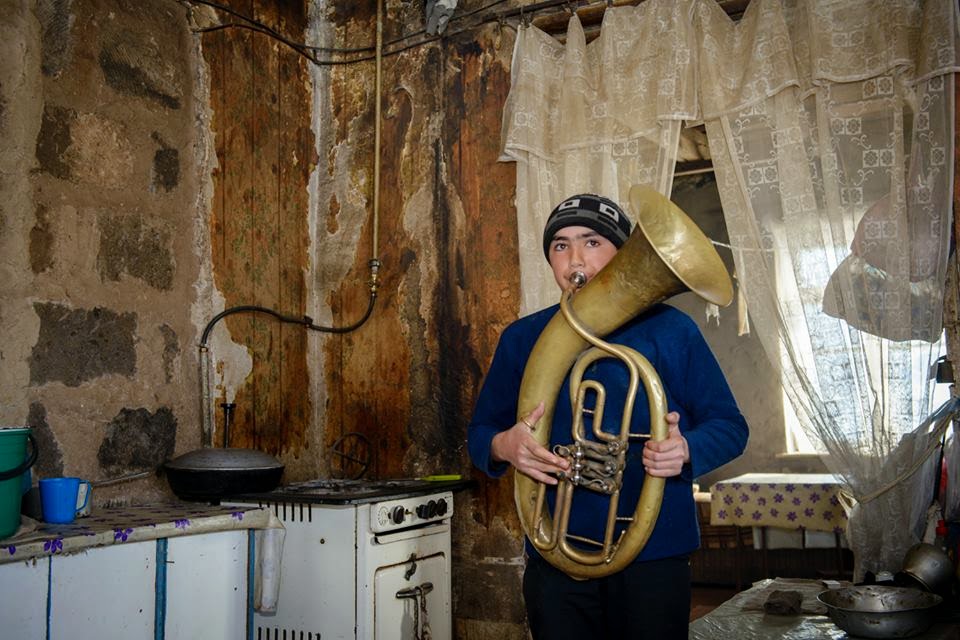 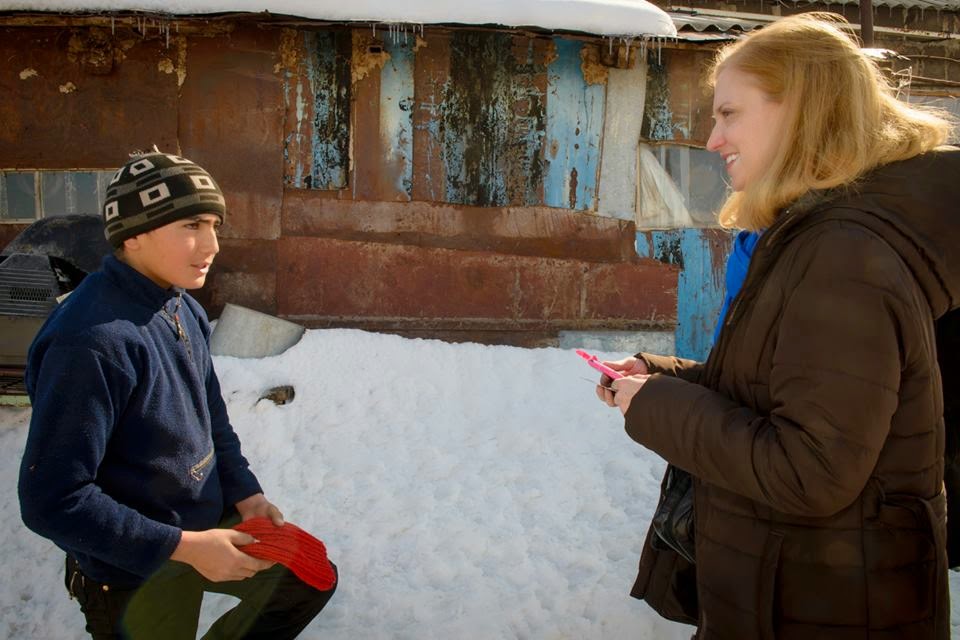 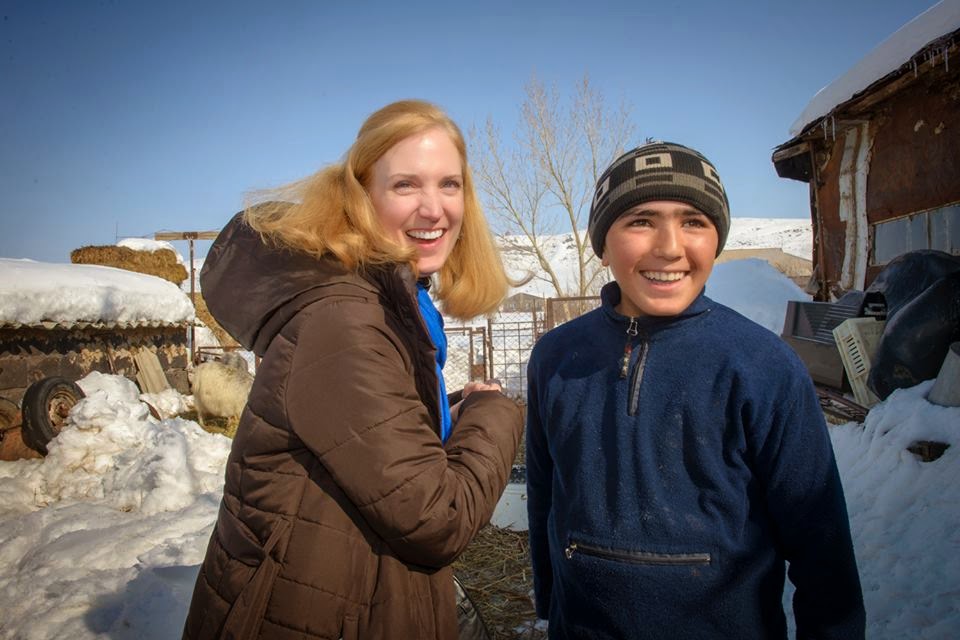 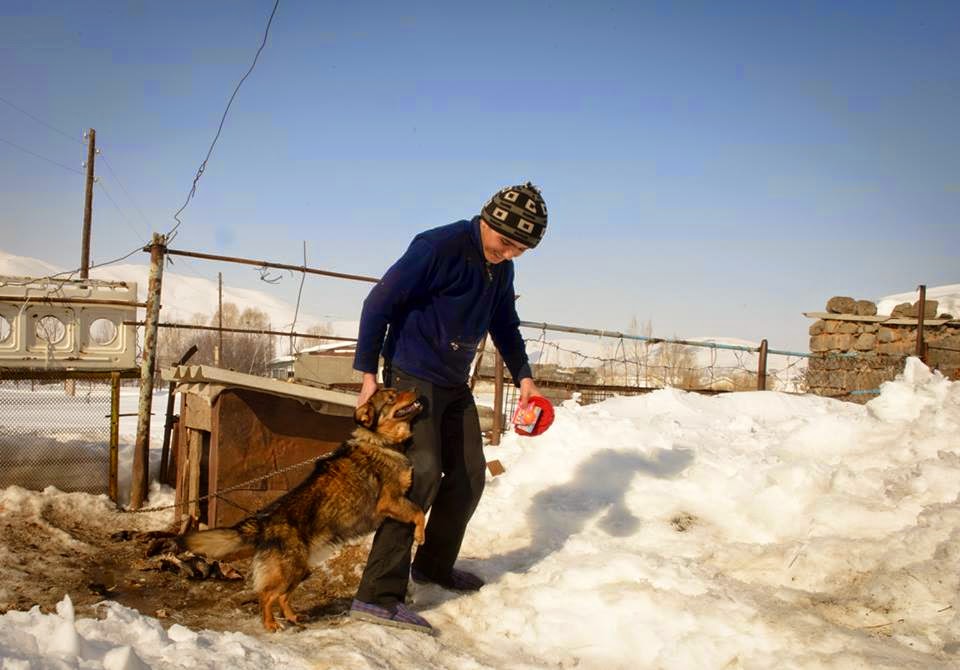 When Nikol opens his notebooks to show us his drawings, I feel a pang, but in a good way, thinking of my own brown-eyed boy and how each of his interests became our own and how he was (and is) a light to us as Nikol is to his parents. 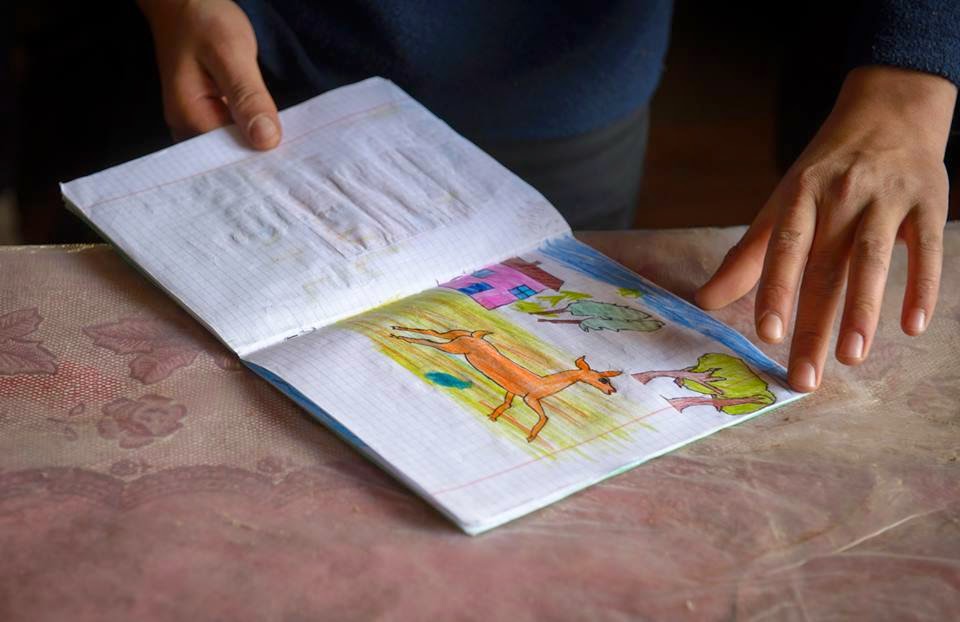 We find out that Nikol’s school is going to start requiring students to have a computer, and that his teacher already gives out links and websites as part of assignments. To hear the words "links" and "computer" while standing in a room with a collapsing ceiling, a water tap nearby in the yard, and an outhouse down the way, is jarring and incongruous. How much more will these loving parents borrow just to get what they need for Nikol? 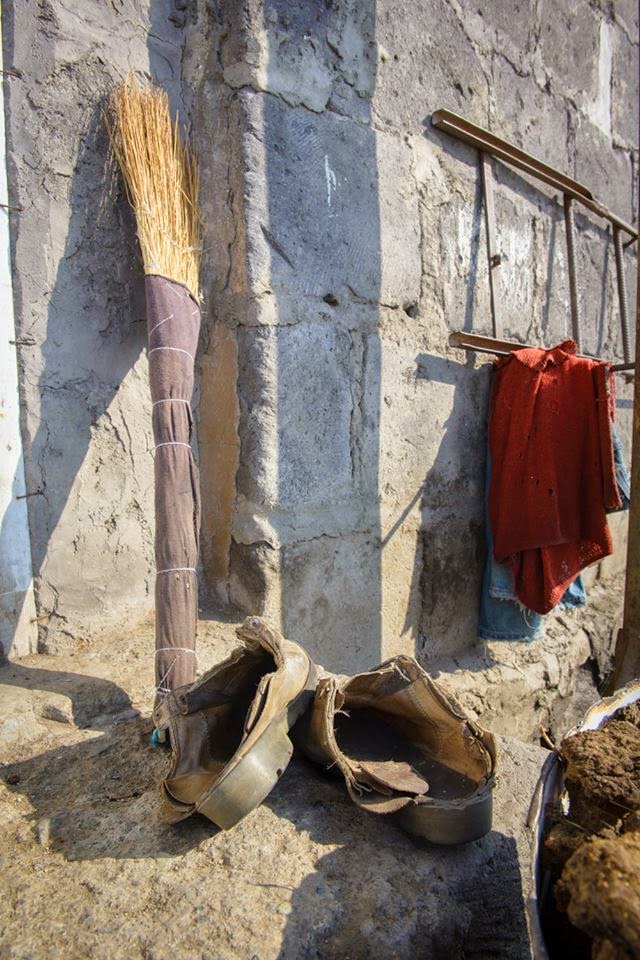 When an elderly woman prays that her ailments and stiff joints will ease up enough to allow her to milk another person’s cow in the hopes they will have enough money to PURCHASE MANURE, how ridiculous does talk of computers sound? What about Nikol's father, unable to use one of his arms because of a war injury? Where do computers fit in his reality, which at first glance looks like stepping back in time to a century ago? 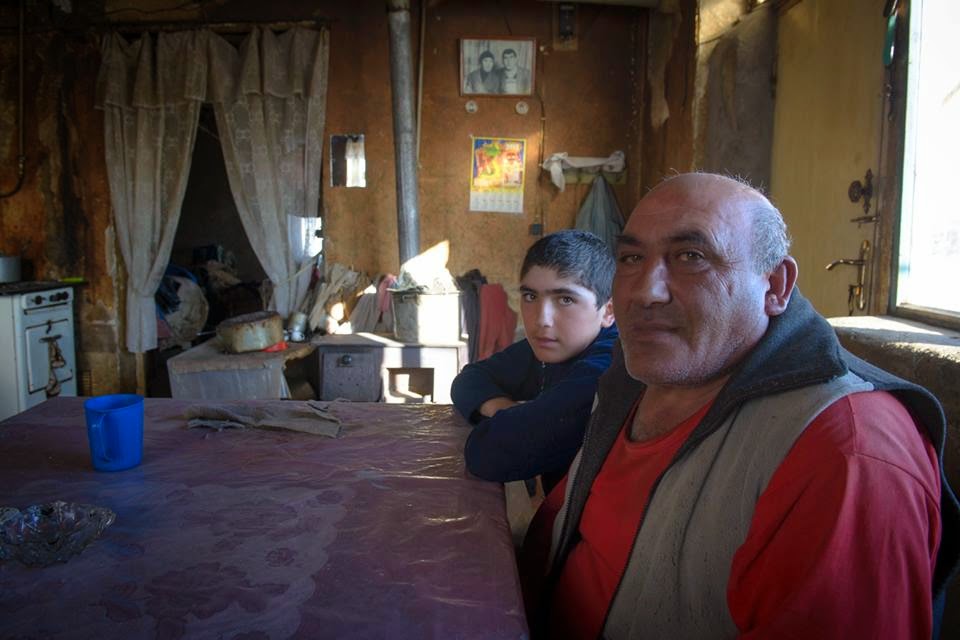 I don't know, for although they are kind enough to invite us into their home, to open up about their fears and struggles, I cannot truly put myself in their place.
“Nikol has a very tender heart,” our guide says, explaining that even at 12 he is a doting uncle who loves to play with his little nieces and nephew. “Yes,” I think, “I bet he does.”

And I know right then, even though a tear has slipped out of my eye.

Even though I can't transport the parents back to their youth, when life looked so very different from this daily struggle for survival.


Even though I can't wipe away the debt.

Even though I can't help Nikol fit in the way every middle schooler wants.

I know that Nikol will be our family's next sponsor child.
And now he is. 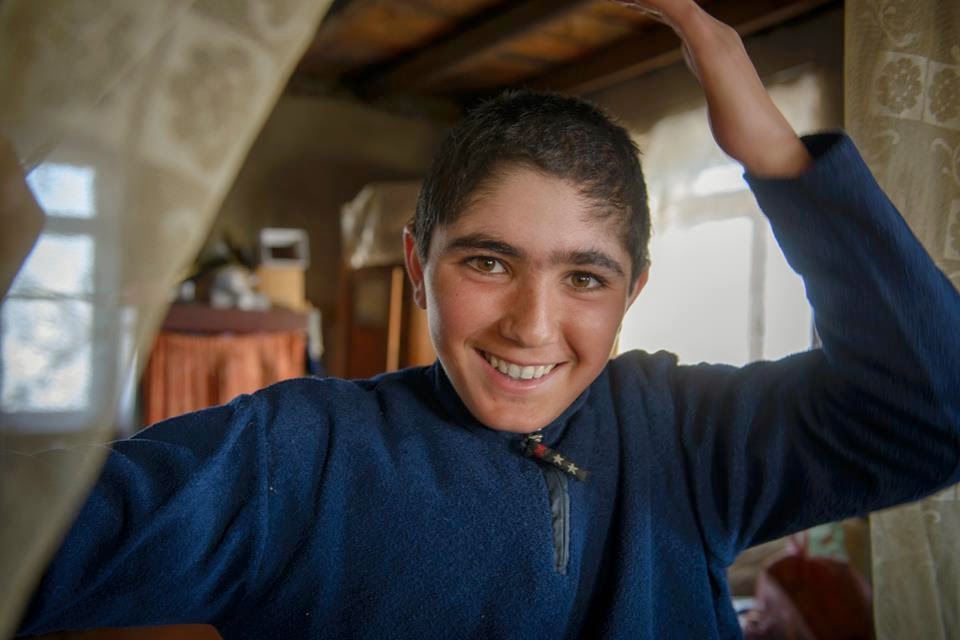 There are other children in Nikol's village who are in need of sponsorship, including his one of his nieces and his nephew. Here's information if you are interested.

Wow. Such a great story!

Lump in my throat! Hugs and prayers for Nikol, your family and our fallen world! Love you! Karen

Such a beautiful story. I love hearing all about your journey! Nikol is a blessed boy! xo

Ohhhh, I have fallen in love with this boy!! The spirit in his eyes is amazing.
There is definitely a reason that you met this young man & he has a bright future with you in it. I wish he and his family all the best.

That is fabulous! He seems like such a special kid that will go far with your loving support. Because you have met him and his family, the depth of your letters will be unbelievable. I loved hearing this story!

I feel sorry that I cannot offer sponsorship to him or Aida's kids. Their stories break my heart. I hesitated reading on for I know reading won't change their situation but it is good to know and see them with such beaming faces. Their smiles are full of hope. I pray that they get a real sponsor who can ease their conditions up.

Again, sorry if this is a duplicate comment, I keep messing up sign in. I just am awed at this story and I knew after seeing that pic of you two together - a glint in your eye I haven't seen in pics for a long time- I knew the outcome. Such divine intervention to meet Nikol and his family. Uniting two beautiful families across the globe.

thanks for your witness Anna. it is a bit ironic, isn't it, that after the fall of communism -- for which we are all grateful -- that while some people's lives got better, many people's lives became 100 times harder. and of course it would be heartless to say to them, "but this situation is better for you in the long run." it also might not even be true for him/her as an individual, family or group. like all things, it's dangerous to generalize. economic systems -- whether communism or capitalism -- will come and go as they have always done throughout history. they are not eternal. what is eternal is the love of God and the importance of our making sure that no one is forgotten or left to starve in the cold. which means, you are doing God's work in a very visible, direct, hands-on way. E.

Well, if THIS isn't just a reality check...I don't know what is. Thank you for the reminder that even when I think and feel my own family struggles financially...it is NOTHING compared to the suffering of others.

Oh my tears...such beautiful families, and touching stories. My heart hurts for them, but at the same time I have to smile at the joy and love they obviously share. Even in the depths of poverty you can tell they are rich in love. So glad you are sharing your journey with us - it really does make you realize just how blessed we are - even when we think things are tough it could be so much worse. Also, lesson learned - be thankful for the things you do have, and cherish the relationships above all else. Praying for all the families, and hoping all get wonderful sponsors - maybe one day I'll be in a position to be able to sponsor a family or child...

Wow. Such a hard hard life. You are such a beautiful ambassador. And if you're old?

Anna I am a big fan of your blog and your writing, but I had never commented. Your current entries on your trip to Armenia have touched my heart deeply. I will pray with you for the families that you met during this trip. May we all be useful in God's hands.

Just amazing. Happy tears here, yet a heavy heart, too. Thanks for sharing all that you are learning.

This post gives me tears in my eyes and hope in my heart! I'm so enjoying your posts!