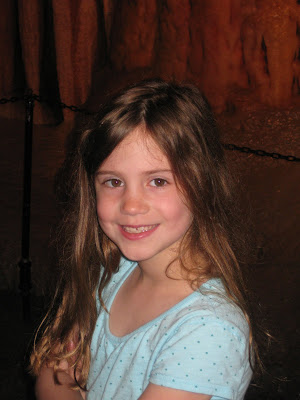 So I alluded to the fact that my house had turned into a den of pestilence. Here’s the lowdown:

Molly, diagnosed with strep at Urgent Care LAST Saturday, took a big turn for the worse on Friday night. She puked all night and well into Saturday. By Saturday afternoon, at which time Tom and Jake were conspicuously absent at a Boy Scout Camp out, she was lethargic and her temperature was 104.5. A rash indicated Scarlet Fever.
And due to the fact that her mother had so stupidly challenged the sick gods by bragging that a) her kids hadn’t been sick in a while and b) in 11 years she’d never had to take a kid to the ER, we soon found little Molly in the hospital with an IV in her arm.

Seven hours later we got to come home. And now, Monday morning, she appears to be on the mend. She is, in fact, eating a toasted bagel as I type.

Hospitals are probably not the cleanest places to be. 5 of the 8 or 9 professionals who looked at her said things like. “Oh, she probably picked up a really bad bug while at Urgent Care.” Not really what I want to hear when my baby is in your facility, limp as a noodle.

Sometimes the idea of puking is almost as bad as the act. At first Molly refused to believe she was going to puke. She went through the stages of denial, then anger. She railed at me, and at God. If I tried to get a bucket in puking distance, she would scream and swat it away. This led to some real free-form puking and a heck of a lot of laundry for me. Fully broken by the end of day 2, she was clinging to the toilet with her face resting on it. Acceptance had come.

Bodily functions, while very normal-seeming when a child is a baby, take on a more Linda Blair-ish tone when the child is almost 9.

Sometimes Mom is wrong. When we pulled up to the ER, Molly asked. “Mommy, Is this one of those places with tubes?” I assured her it wasn’t. Within minutes, Molly had her own tubes going in her arm, one with antibiotics, one with saline.

If you are tired enough, and your child is sick enough, you’ll sleep next to her in a bed full of diarrhea rather than disturb her.

If your husband is tired enough after watching Sports Center, and his wife is “sleeping” sitting up on the couch with his daughter for the umpteenth hour in row, he’ll go to sleep on a bare mattress even though the clean sheets are washed and ready to put back on. Stay tuned: this could turn into a Ray/Debra Romano-type stand-off.

I think the biggest thing I learned is that having a sick child is scary. My heart aches for moms with chronically ill and critically ill kids. You see, Molly missed a trip to the zoo, her soccer game, and cupcakes at her teacher’s house. But she’s doing well and by tomorrow she’ll be up and about and telling me that my clothes don’t match. This was a blip in her life story. Other moms are not as fortunate.

I am so grateful that when Molly cried, “This is the worst day of my life,” I could say, “Yes, I bet it is.”

Email ThisBlogThis!Share to TwitterShare to FacebookShare to Pinterest
Labels: Counting my blessings, poor thing keeps getting sick on the weekends, sick kid

Poor kid! Hope she feels better soon. I too have a nasty cold.

Laughing and crying about your adventures with Molly. Praising God for her recovery, too! Be sure to let us know who ends up making the bed. I have a prediction.

Oh my gosh! I completely understand Molly's aversion to believing that the puking will happen. I hate it so much that I am always in denial. I will be waiting to hear if there is a stand off at your house. Here is the one we had at mine:
http://40daysof.wordpress.com/2010/03/25/i-lost-the-battle-of-the-suitcase/

Gosh, Anna, sounds like you guys have had a challenging few days! Sending healing thoughts...

I'm glad she seems to be on the mend. I've had similar thoughts when my kids are sick. I don't know how moms with really sick kids can do it day in and day out. Then I start to feel guilty for my worrying and drama.

I am so glad Molly is on the mend. I love that you write. And I love that you can see beyond the obvious... and are thankful for your 'blip'... and saying prayers for those who are less fortunate.

When my youngest was little I used to get so frustrated with other mothers that didn't understand the difference between a weekend 'blip' and chronic frightening situation. I can't tell you how many thoughtless women told me that I simply needed to let my child 'cry it out' so that she would 'learn' to sleep through the night... as if to suggest I was an incompetent mother and my child a manipulative mastermind. I have forgiven them for not comprehending that every night presented a challenge to breath... and every meal presented a challenge to eat enough to get the recommended daily allowance of vitamins and calories. At 4 years old, she finally went into surgery with a fever because we could not keep her well long enough to find a 'good' day... within a month she (and I!) slept through the night for a whole week in a row. She even ate two whole halves of a peanut butter and jelly sandwich in a single sitting.

Our experience pales in comparison to some stories I've heard. I remember the helpless feeling of wondering if there would ever be a happy ending. Prayers for those that are still wondering.

Glad she's feeling better. What a scary weekend for you all...even with the clean bed sheets issue!

so glad molly is getting better. Kids being sick is a real drag, esp. when laundry is piling up and dishes are accumulating gunk in the sink. You're right... having a sick kid is scary.

awwww, i would have cried right there beside her. puking and strep would make me wish i was dead. even though one shouldn't wish for those types of things. but when one has a 104.5 fever, one isn't in one's right frame of mind and would certainly be excused, right?
hope that y'all feel better, and that it doesn't go through the house.
can't wait to hear about the sheets.

At our house, back in the day, it used to be "If it's Easter, Benjo must have strep." I spent several Easters in a row in ERs. One year Nonna, at college, had scarlet fever, recovered, came home for Easter and diagnosed little Benjo's sandpapery cheeks as scarlet fever. And talk about free-form puking! Let me just give you 3 words: Lasagna. White. Carpet.The memory lingers on! I'm so glad your Molly is better. What a beauty!

Glad she's on the rebound, and do hope you guys put the sheets on together (big picture and all) because I remember that suitcase on the stairs episode and it led to some violence as I recall. This was an amazing little post -- that on the heels of watching your noodle-limp daughter you could see the illness as a 'blip' and so compassionately relate to those families you mention facing chronic illness. Wonderful job, Anna.

So glad she's better! I can't believe she missed cupcakes at the teacher's house - BUMMER!!!

Thanks for the reminder that I'm lucky! I'm glad Molly is okay and can get back to cupcakes soon.

omg I am SO SORRY!

I remember taking G. Boy to the hospital after weekend of vomiting! We ended up staying two days- and it was SCARY!!!!!


I am so glad things ended up o.k.

Poor Molly and poor YOU! I have to say though - I love the Everybody Loves Raymond allusion. That suitcase fight was one of my absolute favorites.

o you poor things! I am remember many pukey-poopy nights with my boys! Hopefully it'll be over soon.

Hope she feels better soon. I too have a nasty cold
free classified india