I Will Pour No (Cheer-)Wine Before Its Time 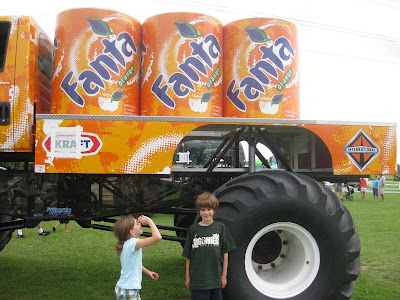 Our beach trip was awesome! Just got back last night and am drowning in the sea of crap-ola that needs to be washed and then redistributed throughout the house.

Certain events yesterday made me question Tom’s sanity. I awoke for the traditional groggy “empty the fridge and pack the car” beach house routine. Our friends had already left.

In the kitchen I saw empty soda cans and beer bottles that had been in the fridge the night before. I turned to Tom, “Why the heck would the Wheelers pour out perfectly good soda and beer? Are they nuts?” I saw a flash of concern cross his face-- a look that said, “Should I play this off or tell the truth?” and he walked away.

Oh my gosh! The realization hit me: Tom had poured out perfectly good soda and beer! Not half-used, flat 2 liter bottles. Fresh, full, happy cans of deliciousness! What kind of weirdo would do that? He came back a few minutes later and confessed, adding defensively, “It’s not like it’s good for us, or anything.”

Puh-lease… an entire week of pigging out on chips and soda and drinking alcohol (I can barely zip my pants) and Tom decides to become the arbiter of all things healthy and pure?

Apparently he had started jettisoning stuff to make room in our car—the same minivan with the capacity to hold 8 dining room chairs at a time.

To highlight just how different the two of us are, I’ll tell you I had just begun one of my favorite beach rituals, divesting each of the 7 bathrooms of the spare rolls of TP and soft soap pumps. I mean, we’d brought this stuff in, and it was coming out with us. As the last folks to leave the house, we usually got whatever no one else felt like taking. Tissue boxes? Check. Half a tub of cream cheese? Where’s my cooler?

So, I had 7 hours in the car to contemplate what an oddball I’d married. When we got home, tired and grumpy and needing to throw some sort of dinner together, Tom served the kids milk from a half full jug that had been in the fridge for over 11 days. Our black beans, he covered with shredded cheese that had been open much longer than the “3-5 Days After Opening” guideline on the bag.

So, contradictory as it may seem, I wanted to avoid beach house waste at all costs, but I was not so keen on giving the kids old, out of date food from our home fridge. I’ve been known to throw out any food if I think about it too long and it grosses me out in any way.
I realize the 3-5 day thing is just a suggestion, but I always err on the side of “when in doubt, throw it out.”

This may have stemmed from my experience with a roommate who liked to leave Big Gulps on the kitchen counter for weeks at a time, and whose spaghetti sauce was a petri dish for mold. “What do you think?” she’d ask me, holding the offending item under my nose. “Get rid of it!” I’d implore, right before she’d skim the mold off the top and eat it anyway. Eww.

I guess yesterday’s events just helped emphasize AGAIN how Tom and I wired differently. Some things I do are quite thrifty, while others might appear a tad wasteful (in a sane, keeping the children from succumbing to botulism kind of way), but they ALL make sense to me. His ways make perfect sense to him.

I do still feel sad about those hapless sodas opened, dumped, crumpled, and discarded way before their time, without ever having the chance to give the pleasure of a good
caffeine buzz.

Email ThisBlogThis!Share to TwitterShare to FacebookShare to Pinterest
Labels: marriage; soda; beach trip; who is the crazy one here?; when in doubt throw it out

Were you and your husband also the ones with the sponge vs dish scrubber disagreement? Because once again, my husband and I are exactly the same!

Even if I didn't want the drinks, I would have knocked myself out trying to find a way for someone else to use them. I *hate* it when anything goes to waste. But until your post, somehow I never realized the contradiction with my "throw out everything in the fridge" mentality.

Meanwhile, when I first moved in with Husband, I threw out items in the pantry that had expired 5 YEARS earlier. He was convinced they were still fine. Sad thing is, he was probably right. But "ew."

I love orange fanta - that picture is awesome. I throw things away before the expiration sometimes, just in case. Matt, on the other hand, will keep food INDEFINITELY! It drives me crazy!

I'm glad you had a good trip and am glad you are back! I think I'd better go clean the fridge....

I actually gasped at the soday funeral! I am in mourning over the loss of the perfectly good carbonation and caffeine that was lost!

The only option is divorce.

And, if your getting one-- on these grounds-- then I will have to as well.

They never mention grocery compatibility in the love match horoscopes. Its not our fault.

I've often wondered if the things we once found "cute" or "endearing" or just explained away or ignored at one time are the exact things that drive us crazy now...

I'm with you about the sodas. I mean - at the very least, leave them for the cleaning crew.

I brought (smuggled) a 12-pack of Diet Dr. Pepper onto our cruise because I was told they'd only have fountain soda and I HATE fountain soda. The bubbles aren't sharp and bitey enough for me and I love that clean can taste. So you know which side of the soda divide I'm on. And I'm a milk pourer-outer because I don't like the stuff and it always smells kinda sour to me. But my mate is the refrigerator expunger because I am known to harbor science experiments because I don't want to wash the moldy Tupperware.

OH I would have been sooooo angry----I can't stand to waste things----and my hubby does get rid of things if he doesn't want to deal with it!! AAAAHHHHHH!