If the Hat Fits, Don't Wear It 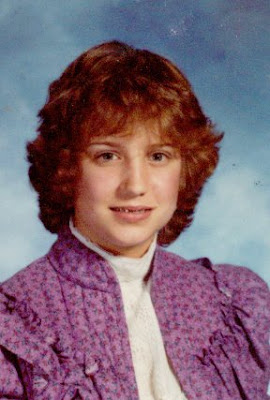 I read a poignant post over at Apathy Lounge about a Jr. High dance, and I wondered if I could plumb the depths of my own Jr. High dance experiences, or whether it would be too miserable. I know I’ve written about my “awkward stage” before, but a Jr. High dance? Excruciating. I am trying to muster up the courage to do it, but today will not be the day.

On picture day in 8th grade, I came downstairs in my wardrobe staples: cords, my ruffly white blouse and my quilted purple jacket. These were some of the few clothes that fit because I had grown several inches and gained 30+ pounds in just a few months. The braces and perm? Just added bonuses.

There was another article of clothing that morning that I have failed to share with you: a hat. A teal blue wool Liz Claiborne hat. Not a “let’s go sledding hat with a pom pom,” but an “I’m pushing 40 and am on my way to brunch at the club,” kind of hat.

My dear mother had bought it at my urging on one of our shopping trips to her favorite store, Lord and Taylor. She bought herself a jaunty burgundy wool cowboy hat that same day. I should have realized hearing all the “oohs and aahs” when she wore her hat to church that a hat could cause a stir. A stir indeed.

But when I waltzed into the kitchen that morning, there was no stir. Perhaps my sister was already at school, for she surely would have commented . Perhaps my mother was just letting me show my independence as she had when I dressed myself in my neighbor's mother's blouse for my 4th grade picture. 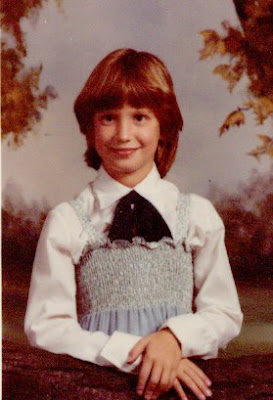 I don’t know. Perhaps she was too enamored with her own cowboy hat to know that it was her duty to intervene and to save me from myself. She said nothing, so off I went.

As I stepped into the school, the murmuring began. It was one of a handful of times in my life when I’ve been so clearly inappropriately dressed, that I wished the ground would swallow me up whole. My stomach felt sick. I felt so exposed. What had seemed like such a great idea at home, suddenly became questionable.

So why didn’t I remove the hat immediately? Well, permed hat head springs to mind. But truthfully, I was torn. I liked my hat. I thought I looked kind of cute. I mean, what if hats were cool?

Hadn’t I been the first one in the school to wear a denim Calvin Klein miniskirt the year before with my bobby socks and Keds? Weren’t all the girls wearing them now? Could I perhaps be a fashion icon, who needed to take a few risks in order to leave my mark?

So, if you look at my Jr. High Yearbook, you will see me with the hat on in the group or “club” pictures, but not in my school picture. It was what I considered a reasonable compromise on one of the most stressful days of my life.

By taking it off for the portrait, I think I gave myself a sliver of a chance for a social future. I still was never invited to a boy/girl party, but there were probably numerous reasons for that.

And now I’m a mom, and I give my kids great latitude in their style of dress and the opportunity to make fashion mistakes. I know it’s a part of growing up. Just ask my husband about the time he wore pants to school with a pair of shorts pulled on OVER TOP of them. Ouch.

And when my kids have rough days, and feel humiliated, I remind them that no one else will remember their foibles as much as they will.

I can’t remember what I had for lunch yesterday, but I still remember:

1. Jenny J. eating paste in Kindergarten.
2. Karey G. with little booger plugs in her nose on the first day of school 2nd grade.
3. The time my dear brother thought he got me a “Chicago” record for Christmas, but it really said, “Chico.” He was devastated, and I still feel bad thinking of it.

And to further illustrate this point, when my friend Cindy ran into a Jr. High acquaintance about 20 years later, whom I had not seen since 8th grade, she told him that she and I were dear friends, that she had been in my wedding, etc.


“Hey, isn't she the girl who wore a hat on picture day?”

p.s. I’m digging into the archives for my Jr. High yearbook so I can show you a hat picture.

i think you are the bravest and coolest person i know. i don't know that i would have the guts to post a picture from that era. i am not strong enough. i was still wearing glasses. BIG glasses. oh, the memories.
thanks for the courage in sharing yours. and what a story!!

I was a huge nerd in grade school. But I went to private school with the same kids since we were 5 years old and some even before that, so I got away with a lot. I have two teeth that never grew in, so I had to wear a "flipper", which is a retainer with two little teeth on in. It moved when I ate. I am sure it would have been humiliating had I gone to school with more than 40 kids. But I still remember the time in 2nd grade when Jeff K. fell off the lunch table bench and peed in his pants. And when Jessica P. puked all over my brand-new white snow boots with pretty stars on them. And I am sure there are kids who still remember my weird teeth and questional fashion choices.

Hehe. I was in 8th grade the same years you were and boy I can relate.

Perhaps you went to school with the creator of Blossom...Keep that as an excuse to your interesting hat.

BTW, I remember some of the clothing I wore in jr. high and high school and have to laugh.

I still wonder if other people remember what I was wearing the first day of middle school...

When we moved back to the states from the Marshall Islands, I had no concept of a "fashion statement". Where we had lived for 3 years everybody was wearing the same style shorts, shirts, flip-flops and speedos as there was a singles store (way smaller than a Kohls!) for everyone to shop in.

So my grandmother had helped to purchase some more appropriate clothes for use to wear stateside... as the temperature would surely dip below 70. And so I went to school that morning thankful for the new clothes. But it didnt take long to realize that jeans with Tweety Bird patches on the back pocket are NOT cool for a 7th grader.
How was I to know?!

The thing is I made SO many fashion mistakes that maybe nobody can remember any in particular?

SO HILARIOUS!!! I had to share this one with my husband!

How about that time you threw up on Mrs. Frasier's desk in French! I believe she was still cleaning up when I came in the next period.

This post cracked me up. I love awkward adolescence stories :)