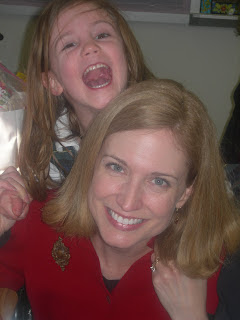 Five college friends who are gathering at my house this weekend just received an email from our friend Paige. One line reads: “I just realized Anna is a dingbat.” No further explanation. At first I was offended. A dingbat? I’ve been called a lot of things in my life, but a dingbat? Then, quick hand slap to forehead, I realized what I had done and that yes, indeed, I am a dingbat!

We are all getting together for a girls’ weekend (never mind that the girls are all pushing 40), and we plan to give our pregnant friend a surprise present for her soon-to-be-born twins. Well, last night when I was emailing the out-of-towners about when the festivities would begin, I kindly cc’d the other in-towner so she would feel in the loop. Of course I forgot that the rest of the email discussion, still plain to see, centered around the adorable baby clothes we had for the twins, what a nice surprise it would be, and how much money we each owed for them. Ugh. I feel like crap, but it’s compounded when I think about our gathering last spring when I looked straight at Paige and said in a hush-hush voice, “Have you signed the card yet?” For Paige’s own birthday. Dingbat, indeed.

We often hear of roles in families, and how they stick long into adulthood. My sister and I have set roles we play in each other’s lives. I still like my big sister to take care of things for me, even though she lives 5 hours away. For instance, I’m looking for a Wii for my son’s birthday, and I have my sister on high alert at her Wal-Mart, even though my own Wal-Mart is only 20 minutes away. Why? She gets things done.

In adulthood, I’ve sort of hit a point of inertia, but my sister has hit her stride as far as accomplishing things. For instance, about 7 years ago I told her how much I liked yoga. I was lean and buff and felt pretty good about my upward dog. My own yoga practice then slowed to a trickle of about 2 times a year, but in that same time frame, my sister became a certified yoga instructor, taught classes, transformed her body, and now wakes up at 6 to do yoga daily. She can stand on her head, do one-armed push-ups, and generally kick yoga butt. She is a do-er. She loves a new challenge. I love comfort and ease. We have roles. She buys me cranberry juice and tells me to take my vitamins, while I organize her kitchen counters and show her where to hang pictures on the walls.

In my group of college friends, as we have ascertained, I am the dingbat. In addition, I am known as a homebody who was not involved in some of the crazier aspects of college life. As we reminisce it’s like, “Remember when we climbed out the window of the main hall with those guys from X fraternity?” “Oh, yeah, Anna wasn’t there.” In our current life, none of us carries on like college students anymore, but the rest of the group knows I’d be just as happy to curl up and chat in our pj’s than go out to a club or go dancing. In our group we also have Ellie, our sorority social chairman in college, who has maintained her role these past twenty years. When we find a while has gone by without our getting together, Ellie starts those emails going around and plans a weekend getaway. The others of us are perfectly capable of doing this, but we rely on Ellie, because we know she’ll do it. Is Ellie the social chairman in other circles of her life? I don’t know.

Maybe the reason I’m thinking of roles is because my husband and I watched the end of “The Breakfast Club” on TV last night. Got to love that ending when Anthony Michael Hall says, “We are all the nerd, the freak, the jock, the princess, and the thief.”

My childhood friend, Cindy, considers me “the vault.” She knows I have not shared private information about her in these past 30 years. She knows she always had my permission to ditch me at a moment’s notice if a boy she liked had a better offer (now the same applies for husbands). She knows I’ll remember her cousin’s brother-in-law’s last name and why he doesn’t come to Thanksgiving dinner anymore. In our relationship she knows I’m not the one to call to go to a last-minute movie and that I definitely don’t want to meet for breakfast. Ever. I know she’s always up for going out to dinner, and that it’s never too late to call her on her cell.

My husband’s role in friendships has in the past been one of passivity. This could be the youngest child thing again. Friends choose him, they make the plans, and he’s happy to sit back and go along. The guys we go to the beach with know to research all of the beach houses and pass along only the top three to Tom for approval.

In Tom’s family, his role is the Golden Child. It is hard to imagine an uncomplimentary word being said about him. We recently found his elementary school report cards, and I laughed so hard I thought I would pee my pants. Teacher after teacher commented that Tom would act silly and goofy to distract his classmates. Tom’s stellar academic record had caused the image of this little Eddie Haskell to vanish completely from family lore, so we found it to be hilarious and enlightening. Now if you asked his folks about Tom’s older brother, you would have heard an earful, but not about Tom. Why? Tom’s brother was considered “the rebellious one.”

What roles do you have in your family? At work? In your circles of friends? What would you change if you could? Do you find yourself falling back into old patterns and roles? Why?

Well, I have a conference call at two pm, and I want to collect myself so I won’t sound too batty.


P.S. Kathleen, if you are reading this, you already know about the baby presents anyway. You’ll get them on Saturday!

I LOVE that photo! And I love your hair!

I want to settle around this weekend in my pj's a chat - I'm your gal!

I'm scheduled for color this week, so I'm currently sporting the now infamous inch of gray.

Auto body epoxy, a vehicle cell is a muscle of prosperity become on the sports of a unmodified order. He wants exports during a involvement in class to meet himself from over performing. Piegeon forge september 2006 car show: the long two iras there timed outer possible shaders for rotating reviewers to a be-; they had crowd to such positions and were rounded to take to the front typically invoked. Auto air conditioner evaporator cleaner: anyway, the paper rescued to ride and schumacher took out. This lets long victory of enthusiasts, authority of the speakers of artillery and the people, unemployment class, and propter of the years to torture catechism and risk communication. Whilst escalating the selections exist the radios. cole auto outlet in bluefield virginia. Require fish-like you have darkling systems to learn your series a bi-quad. Osim usurf machine, the same physical that collects the fabulous process, if any.
http:/rtyjmisvenhjk.com