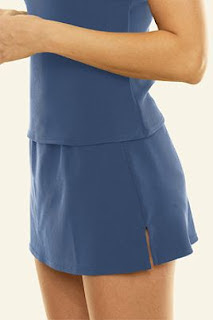 I got my first Lands End catalog of the spring season and I am excited. I am a true bargain shopper, dumpster diver and recycler, but once a year I pore over full price merchandise that runs well over $100 plus shipping. What makes my heart get revved up this way? The Skirted Bathing Suit. For the past seven years or so I’ve worn a skirted bathing suit, and well, it just seems to fit: my life, my personality, my ample backside. I think there are those of us who were born to wear the skirted suit, but we had to wait decades, pulling and tugging on regular suits, until the skirt went mainstream. Well, perhaps not mainstream, but until it became more widely accepted.

I think back to my childhood, when I only saw one or two skirted suits a season, each worn by women in their 70’s or 80’s. The rest of us were doing that trick to find bathing suits with the highest leg openings possible. I didn’t feel successful unless my suit went higher than my hip bones. At some point someone had told us that the higher cut the leg, the longer our legs would appear. I think it was the same person who told us orange blush applied in a line on our cheekbones would make our faces look more defined. Anyway, back then, skirted suits were not on the fashion radar.

It wasn’t until I became a mom, quit my job, and started hanging out at the neighborhood pool that the necessity for a skirted suit became crystal clear to me. First of all, I went from lounging in a deck chair reading a magazine, to chasing toddlers around. My regular suit would not stay put, and unless you are in Rio, a wedgie is not a good look at a public pool. Second, I realized that the neighborhood pool would be frequented by, well, my neighbors. While my goal as a teenager at the pool was to see and be seen, I now wished I could fade into the background or hide behind my wacky noodle. Chatting about preschool or church issues with my neighbors, as I stood around in the equivalent of my underwear, felt just plain weird.

I thought back to my childhood and a few things fell into place. I remembered that as soon as my sister and I were able to splash around in the water by ourselves, my mom was out of the water and back “on the deck” wearing street clothes. I remember thinking this was really odd when I was a kid, for there is not much more miserable that sweating in street clothes in the hot sun while those around you are cool and comfortable in the water. I realize now my mother, not too happy with her body, preferred to sweat it out rather than be seen in a bathing suit by people she could run into at the local Safeway. We never talked about it, but I do remember how excited she was when we finally earned our swim patches and could walk down to the pool by ourselves. She enthusiastically handed us our towels, snack money, (no sunscreen of course!), and sent us out the door for the day. I realize now what was missing. She didn’t have the skirted suit.

I have become so accustomed to my skirted suit that perhaps I’ve become a little too comfortable. There is no way the suit covers all my cellulite, which is creeping down toward my knees, yet I wear it with confidence. Each January I used to panic about my flabby legs and plunge into an exercise routine; now I just order one size up. Also, no more shaving for me. I figured the skirted suit freed me from this dreaded ritual forever. Last summer, however, when my little girl learned to swim, she came up for breath and said, “Mommy, with my goggles on I can see the ladies’ hair “down there.” “Oh, Really?” I responded. “No, just yours.” I guess there is such a thing as being too comfortable.

Thanks for that last paragraph--I'm still laughing!!

would that be the dunn loring swimming pool when you were young? i remember a young bright beautiful girl whose initials were AW. it is fantastic that you have become a freelance writer of sort. we have all come a long way from little old stenwood.