My bright idea of re-joining the gym so Andrew could go to up to THREE hours of childcare a day tanked. It was even a DROP-OFF place so I could run to the grocery store or to Panera to write! Andrew was fine with it until the big kids got out of school and the playroom got crowded. He decided he'd only go if there were just FOUR other kids there. Quite specific. So once again I am paying for the fancy gym, but not going. Enjoy your green smoothies and stair masters those of you who actually go!

Margaret, flush with cash from graduation, has decided that work is over-rated and has been clocking in a massive 6 hours of employment each week. Next summer will be a real wake-up call. I've offered to have her babysit Andrew without even needing to get dressed or leave the house, but those two are like oil and water. You might think sibling rivalry wouldn't exist with a 15 year age difference, but you would be sorely mistaken. He refused to let her take him for ICE CREAM today, for heaven's sake.

Margaret's big issue this summer was getting locked out of Instagram because 1) her phone broke 2) we are doofuses who had a defunct email account and phone number attached to her account. The great news is that thanks to an AWESOME blog reader and her multi-talented cousin, Margaret is back in! She immediately went with a friend to take glamor shots in the parking lot of Taco Bell, which I don't quite understand, but to each her own.

My big news is/was that we almost bought a small vacation home. This is something we've been working on for 3 years, and we were supposed to close on it today and go down there on Sunday. I had bags and boxes and board games ready to go. Alas, a bunch of complications came up and we pulled out. I am feeling down about it, weirdly not because I really enjoy the idea of "vacationing" with a three year old (is there such a thing?) but because I envisioned a) accessorizing it with gusto b) opening it up for small-group getaways and writing and grief retreats. My mind was spinning in an excited way and now it just feels blah.

Speaking of grief retreats, I'm honored to be going to Michigan next week to speak at a retreat for grieving moms through a wonderful organization called Starlight Ministries. My blah self wonders what I have to offer when Andrew and I are still in our pj's at 12:18 pm and I haven't written in eons. Deep down, however, I know that if I show up and open myself up to being used, God will take care of the rest.

Last night our nephew (Jack's BFF) came to spend the night and do some work in the area. The dynamic shifted immediately, as if we all let out a collective deep breath we didn't know we were holding. Although most days feel normal, there is still a palpable feeling that there should be a 20-something young man here. It feels so natural, so right. Our family looks vastly different from how it did with Jack alive. But there is muscle memory of how it once was, and those few times that we get to approximate it again, feel anything but blah.

Love you friends. How is your summer going? 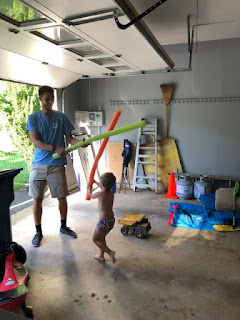 Email ThisBlogThis!Share to TwitterShare to FacebookShare to Pinterest
Labels: checking in, hot as hades, my readers are the best, summer blah

"She immediately went with a friend to take glamor shots in the parking lot of Taco Bell, which I don't quite understand, but to each her own." My very favorite line and also "...but because I envisioned a) accessorizing it with gusto..."

Hi, Anna: Eden and Michael are clearly on the same summer work schedule as Margaret. I had envisioned a schedule resembling, I don't know, mostly full-time. Clearly, I was mistaken. Michael is off Saturday, Wednesday and he is never scheduled for Thursday. How does one work 35 hours doing that? Eden at least has a substantial nest egg, but is averaging 10 hours a week. Madison 'is' working full-time, but it truly is just a summer position.
And, i wouldn't let that'still in pjs at 12:18pm' bother me.....it's 6:18pm and I am finally going to shower and get dressed. My kids say: 'It's summer!' They know everything, I'm not going to argue with them. Much love - you are all always in my prayers. Mariann Alicea

I can only imagine how wonderful an event would be at your future vacation home! Someday...
I love reading that you are going to speak at an event in Michigan - that is where I grew up, and I know there are many who will be blessed by you! Enjoy your summer one day at a time...

Years ago, when my now 42 year old son was 16, with a car he had just bought and a newly minted driver’s license, summer came around and I asked when he was going to look for a job. He looked at me in astonishment and said “I’’ve dreamed of this my whole life, having a car and hanging out, doing nothing during the summer.”. I was so taken aback that I said “Okay, but I’m not paying for anything, no allowance.” He said “That’s fine”.

What actually happened that summer was his best friend slept over almost every night, and they stayed up until the wee hours of the morning watching tv, which meant they slept in until the late afternoon, ate and started another show.
In retrospect, I’ve so glad because he had the illusion of freedom without actually going anywhere, which gave me great piece of mind.
(And he’s a responsible adult with a job, so he turned out fine.😁)

Enjoyed reading your Summer check-in. So sorry about the summer home. I would be down too. You're going to be great in Michigan....

My son is Margaret’s age - taking a summer school class with much back of the hand to the forehead. The kicker is he’s doing it so he can join the airforce here in Canada. Otherwise, he’s a bit of a loafer - 12 hours of work a week. I’d pay real $$ for a hidden camera @ bootcamp if he makes it. Cindy