Guess what? Rare Bird is coming out in paperback on Sept 8!

That day is the four year crapiversary of Jack's death. No, the publisher didn't know or plan it that way, but these "coincidences" have ceased to surprise me.

I am honored to have both a hardcover and paperback of the book, and I hope this new release will get my account of raw, early grief in the hands of many more people who could get something out of it.

An exciting development is that there will be a brand new cover! Turns out sometimes a new cover translates better into paperback.

Here is the original hardcover. I loved the book jacket's orange accents and the image of 2 kids who looked exactly like mine. If you want the amazing story behind where we found the image for the hardcover, look here. 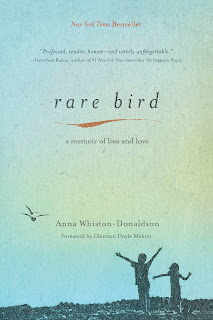 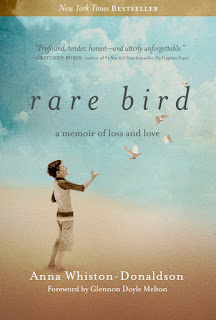 I love it! I think it will look terrific on a glossy paperback. The only thing I think is missing is that cool subtle feather graphic that's under the title of the original.

The year since Rare Bird came out has been one of quiet growth for me. I spoke to book clubs, church groups, and met with people one on one to talk about the book and about life. The largest group was nearly 400 as I stood at the pulpit of my home church 3 years to the day from when I spoke there at Jack's funeral. I could feel the love and support in that room, and I'm grateful to each person who came.

Other get togethers took place in libraries, other church sanctuaries, and office buildings. I was honored to sit and listen at the kitchen table of a couple who had lost their beautiful daughter to suicide just a few months before and who both read Rare Bird when it was first released. One of my favorite book discussions took place inside a packed hair salon with multi generations of women sharing laughter and stories late into the night. Another was when my presence at a book club was bid upon at a charity auction.

The paperback edition has the same content as the hardcover, but it will also have a discussion guide in it that is ideal for book groups or for individual thought and journaling.

I don't know how it happened, but somehow Rare Bird turned out to be about more than just grief, and the year since it was released turned out to be about a lot more than launching a little blue book into the world. To me, it was a year of human connection and my spreading my wings. It helped me remember how much I love speaking to groups even if my voice wavers sometimes and my eyes get moist. It reminded me that there are many, many kinds of loss and that we all have a story to tell.

Thank YOU for being such an important part of my story and for all of your support this past year! For reading the book, for showing up at events, for following the blog, for encouraging me on Facebook (my second home) and for putting the book in the mail to friends and even strangers with the hope that it somehow could make someone else feel less alone.

P.S. The paperback is available for pre-order NOW from all retailers and is an amazing 51% off at Amazon today. That's only $7.42 with free Prime shipping!  I wanted to let you know about that deal as soon as I found out.

Email ThisBlogThis!Share to TwitterShare to FacebookShare to Pinterest
Labels: do you like the new cover, paperback, pre-order price, Rare Bird: A Memoir of Loss and Love

Love the paperback cover! I am happy to report our library system has two copies and they are both checked out, but I have put it in my queue.

Your book is fantastic in hard back or soft. Congrats!

Anna, you have taught your many readers how to handle grief with grace. Your faith, grit and humor continue to inspire. Good luck with the release of the paperback! Love to you and your sweet family. xo -Maureen

Just bought and can't wait to read. Thank you for sharing your grief with us, your writing with us, for sharing Jack with us.

I just this week had the opportunity to read Rare Bird, taking it all in during one unhurried sitting. Your writing is so beautiful, Anna. I knew that from your blog writing, but the book cemented it.

I am so proud of you. Love the new cover.

Anna - Congratulations on the release of the paperback version of rare bird. I love the paperback cover & wish the publishers would have recognized the significance of the feather as well. I was drawn to your book from a Facebook share and ordered the Kindle version. I'm still fairly new in my journey with grief and have found your words and insights healing. I devour others' stories and seek any glimmer of illumination that may bring a little peace and comfort on my journey. Know that you are helping this soul. My heart is open and the coincidences I've experienced early on seem to be weaved together directing me to a yet unknown discovery. The signs I'm receiving from my Son are showing me that every choice I've made in my life, regardless of whether it be career, love, faith, health or relationship related, are creating synchronicities preparing me for what or whom I was meant to do or be. As difficult as this road is to navigate, gratefulness fills my heart that I am able to take a step forward most days. Grief--an adventure. I never would have imagined!

One of my friends from college just lost her 19 year old daughter in a car accident this past Wednesday. Although it's been over 20 years since I've seen my college friend, we are in touch over facebook, and my heart is breaking for her. Thank you for this post - I have pre-ordered her a copy of Rare Bird in paperback and will forward it to her once I receive it, giving her a little time and space between now and then. Thank you.

One of my friends from college just lost her 19 year old daughter in a car accident this past Wednesday. Although it's been over 20 years since I've seen my college friend, we are in touch over facebook, and my heart is breaking for her. Thank you for this post - I have pre-ordered her a copy of Rare Bird in paperback and will forward it to her once I receive it, giving her a little time and space between now and then. Thank you.

The new cover is just as inviting as the hard cover is. I like them both equally. So excited for you. Cheers!

I am so proud of you and the stories you still have to tell.

This is just so wonderful and I am so happy for you. By the way, I tried commenting a while back on your post about the inside oozing out, but it never seems to work when I do it on my phone. Anyway, I just want you to know I loved that post. For many reasons.
It's been incredible following you and your journey. Your courage, strength and honesty are inspirational...it's been so meaningful to me. I think of you and your family often. I'm so glad Rare Bird will make its way into more people's hearts. Much love to you, Anna.

I've been waiting for news about this. I will be sure to share it. I wish I had known in time about the 50% off. I do love the new cover, and I love how rich this year has been for you.

Congratulations on the paperback! I love both covers, and I'm grateful for your book. I felt like I'd found a camerade in grief, though our experiences are quite different.

Hey, Anna! I'm from Brasil and I read your book these days. What you put in words in this book... was amazing! At the first moment, I felt your pain, your tears and it makes me feel sad, but after, it makes me thought about life and my work. I work with cancer children and it's really hard sometimes. But you learned me to much about how listen and care of theirs parents. I don't know how is lose your little child, because I don't have anyone, but now I can imagine how it hurts to much and how is possible continue living with this pain. Thanks for help me to much! I hope that God will continue to bless you to help people passing all light inside you to the rest of the world.
With love,
Letícia

Thank you for sharing your story with us. It gave me a whole new perspective for friends who have lost children. Sadly, there are too many young ones who are not here with us. I may have to run out for the paperback just so that I have both. Each cover is stunning. I hope that you always have happy memories to hold you through each day. There are people who Jack has made an impact on. We recently had 2 teen girls die in a car accident in our area. It brought back many memories of a friend who had died right before my 16th birthday. She is always on my mind. I decided to send a card to her mom & sister sharing some of our memories. I wanted them to know that even though it has been more than 20 years, she is always there & we had some really great times. I hope that you will have someone share those happy times with you. Your family is such a blessing.