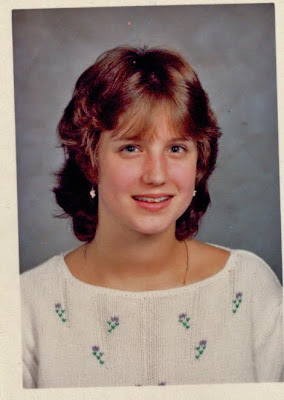 Every once in a while I'll write a post, usually that I'll find very funny, but then I'll take it down.

These posts are usually about another person. The rush I get trying to put into words someone's ridiculous or rude or clueless behavior lasts a few minutes, but the regret lasts longer.

You may think this is totally weird, so for a psychotic-Anna point of reference I'll tell you I still feel bad that I turned down the chance to dance with Jeff Travis in 9th grade at a "Sock Hop." He was a friend from elementary school whom everyone called, "gay." I chose my burgeoning social life at our new school over loyalty to an old friend. 27 years ago. It haunts me. You get the picture. Speaking of pictures, that's me in 9th grade at the top of this post. Eeek.
I even removed a rather innocuous post that referred to a man I saw wearing a cape. A CAPE! It was, I thought, hilarious, but the uncomfortable feeling I had after I wrote it lingered until I took it down.

Now if we look at the issue of a grown man wearing a cape (not of the super hero variety-- more Sherlock Holmes-ish) you may have sided with me in thinking that his fashion choice was outmoded at best, bizarre at worst. I would have been "right." Hello? A cape? But was it kind?
I know that's a silly example, but I've been thinking about kindness a lot lately.
Recently I saw my son struggle to play a kick ball game with a group of kids of varying ages. He got all wrapped around the axle when some of the kids weren't playing "by the rules." As a mature 40 year old, I could see that when kids aged 4-11 are playing a game together, it's not really about playing the game correctly. It's about finding common ground in which all can have a good time. And truthfully, only one person wasn't having fun, and that was my 11 year old son, the oldest in the group. He was intent on being right, but he didn't care about being kind in that situation.
I have friends who are in conflict right now. To an extent, both sides are "right," but damage is being done. I feel for everyone involved. And I wonder, do you think it's easier being right or being kind?

Email ThisBlogThis!Share to TwitterShare to FacebookShare to Pinterest
Labels: being right, friendship, regrets

Argh...I know what you mean about regrets over not being kind. I have too many of those too.

I suppose it's easier to be right than to be kind. But it's better to be kind than right. I'm actually in the middle of a conflict and I know for a fact I'm right...and I'm not being kind. Maybe I should rethink my words and actions. Argh.

oh, it is definitely easier to be right than to be kind, and being right may not get you what you really want in the end. have you read the book "getting to yes"?

What is it Dr. Phil says? Do you want to be right or do you want to be happy? Right is nice--but at what expense? How do we want others to view us? As someone kind and generous? Or as the person who always has to be right? Which is more fun to be around? Kind doesn't always win out, but it should. Thanks for the food for thought.

And I'm with you and Christy about the cape! Hysterical!

Sometimes right should be sacrificed for kind. Right can be a very lonely place...

Always kind. Right is often relative - but kindness is universal. No one ever remembers a friend fondly for always be right.

It is easier to be kind, but that might not be best for those involved. There is a fine line between "being kind" and "enabling."

One of the first Bible verses Benjo learned--

Delivered in a perfect imitation of his Sunday School teacher's thick drawl.

He wasn't being unkind, just observant.

Until recently, I lived in a town where nobody batted an eye to see people in 18th Century costume (yes, CAPES, both men and women!) pushing a grocery cart or passing the collection plate.

I guess the acid test is how superior we feel when we're "observing" someone else's behavior. Oh, crap. Now I have to rethink my Regis Philbin post! Thaks, Leslie.

Oh, and you were such a 9th grade cutie, Anna!

I too am in a place of choosing rightness or kindness and it isn't as easy as one might think. Very good & thought provoking post!

I just CHALLENGED you with something sent to me. You get to be one of my "lucky" friends to go for it. Come to my last post and see ok?

My husband and I have two "couple" friends, and the six of us have done dinner, movies, family parties and even holidays together for the last several years. Now those other two couples are at war. UGH. It's horrible. It's beyond who's right and who's not. I just want my social life back!

On an unrelated note, my word verification word is "vagicon," which just sounds ick.

In the 7th grade a friend of mine ran for class president. I turned against him and campaigned for his opponent. I still think about the little chant I made up - "You say YK. I say No Way!" - and how that must have hurt his feelings.

In the long run it is eaiser to be kind. Esp. if you tend to ruminate about things for 30 years or so.

I don't know which is easier, but I agree with you 100%, right never feels very good after the fact. It's a poor consolation when I've been unkind, or humorless, or lost my temper, to know that I'm right.

Sigh. Thank you. I need the reminder often.

hmm.. I think it takes some maturity to reflect on that. You've hit the nail on the head, though, with what I'm trying to teach my 3 oldest kids. But, I know for sure if I asked Charlie Brown, which is better - to be right or to be kind, he'd choose being right.

I just figure, I keep my mouth shut and let someone else dig their own grave. But, telling a kid to do that is pretty hard for them to understand.

In hindsight? Nearly always kind. But you know what they say about hindsight. And Anna? You were cute in that picture, btw. I cut my 9th grade picture out of my yearbook; that's how bad it was.

Being kind should always overpower being right in my opinion.

you shouldn't be embarrassed. everyone loves some humor!