Am I Projecting Loudly Enough For You? 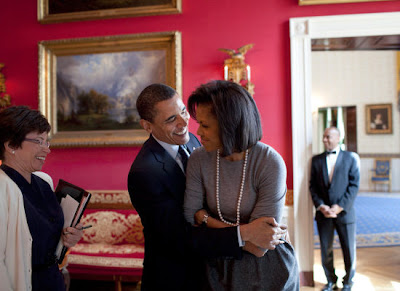 So I woke up this morning pissed at the president. In my dream Barack Obama had dumped Michelle for a much younger and far inferior model. Instead of beating around the bush, “I did not have sex with that woman,” he immediately gave Michelle her walking papers and installed the young hussy in the White House.

I felt betrayed. What about all those “date nights?” The flirtatious dancing at the Inauguration? The fist bump that rocked a nation? Was it all a façade?

I love reading about history, but a lot I’ve read about presidential marriages upsets me. I liked the ideals of the Kennedy’s’ Camelot, and I LOVED the clothes. But the pill popping and sex swapping? Not my cup of tea!

I was hoping the Obamas would be different. Until last night.

Now you might wonder how Sasha and Malia figured into the dream. They didn’t even have a cameo. I think that MIGHT have been because a certain someone who had a milestone birthday this week, and who also likes to bare her arms in a fun sheath dress now and then, may have been relating solely with Michelle in this particular dream.

I mean that little hussy he brought in? Do I even need to describe her to you? A reality star wannabe? A celebrity in her own mind? So skinny and young she’d probably slip down the drain when she took a shower? A vapid vixen raised in the era of MySpace and “friends with benefits.” What was Barack thinking? Trading in Michelle, Princeton graduate, trailblazer, true partner and great mom for such a substandard replacement? Ugh.

I know Mr. Obama got a lot of female validation after those shirtless Hawaii photos came out. I know I certainly appreciated them. But no need to get so high on oneself you start to look elsewhere for a good time. Mr. President, we know Michelle’s been your rock in every way during the past 20 years. You need to get a grip.

I fully expect you to wise up and see the error of your ways. And to help, I’m turning in early tonight so you can start digging yourself out of this one.

He won't turn out to be a cad. I have faith!

Oh too funny! Those dreams can be too real at times, can't they?

I've had one dream about them...but I was Michelle, and we had just learned Barack won and all I could think about was all the new clothes I would get to buy and wear! Ha! Much more fun than your dream.

HAPPY BIRTHDAY!!!! I hope you had or will have a fabulous celebration and embrace your 40s - they're the new 20s, after all. So says Sarah Jessica and I believe her!

You are so funny!

"The fist bump that rocked a nation" cracks me up.

Were you curbside shopping when he did this wife trade-in?

I've had dreams wher I woke up and gave the ol' hubs a punch...

Freaky when dreams feel so real!

I have no comment on Obama---he's not my favorite---lets leave it at that....

I have had dreams that were so good I don't want to wake up. Sad when a dream is better than real life.

I'm glad it was just a dream! He doesn't seem like an unfaithful guy to me.

Love this. Love it.

hello everyone. I'm really into shoes and I had been looking allowing for regarding that particular model. The prices seeking the velcros are all over 190 dollars everwhere. But definitively I found this area selling them for the benefit of half price. I in reality want those [url=http://www.shoesempire.com]prada sneakers[/url]. I will absolutely purchase them. what can you say about it?

hi there everyone. I'm really into shoes and I had been looking as far as something that meticulous brand. The prices for the boots are around 230 pounds on every site. But definitively I found this location selling them for the benefit of half price. I in reality love those [url=http://www.shoesempire.com]gucci sneakers[/url]. I will probably buy those. what can you tell me about these?

good day friends. I'm actually into shoes and I have been looking for the sake of that particular make. The prices due to the fact that the boots were approximately 340 bucks everwhere. But definitively I found this location selling them for half price. I exceptionally love those [url=http://www.shoesempire.com]gucci sneakers[/url]. I will definetly purchase these. what do you think?

good day bros. I'm honestly into shoes and I have been looking as far as something that meticulous model. The prices for the shoes were around 250 pounds everwhere. But definitively I set this location selling them for half price. I absolutely want these [url=http://www.shoesempire.com]gucci sneakers[/url]. I will probably buy them. what can you say about it?