What Would Anna Do? 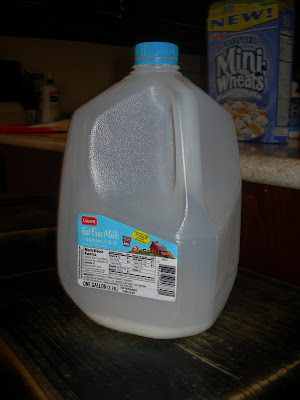 …if she woke up and saw there was just this much milk left in the jug?

And she feels grumpy, off, and a little bit crazy if she doesn’t follow her routine of tea, newspaper, and two big bowls of Special K Red Berries? And her son's equally rigid ritual includes having ample milk in which to bathe his 6 at a time, yes exactly 6, Frosted Mini Wheats?

She’s alone in the kitchen.

She ponders, bargains with herself, justifies her position, takes this picture and…

shares it equally with him even though she knows it won’t entirely coat her first bowl, let alone her second.

She does not comment when he still has milk left in the bowl when he’s finished. But she does notice.

And you didn't pour his cast offs into your bowl?

You're a very good mommy.

It's all about putting the kids first...

I have been known to make pancakes (with mix requiring only water) to save the milk for myself. I pretend I am doing something special for them.

That right there is an example of some mighty fine motherin'.