The Yanks are Coming 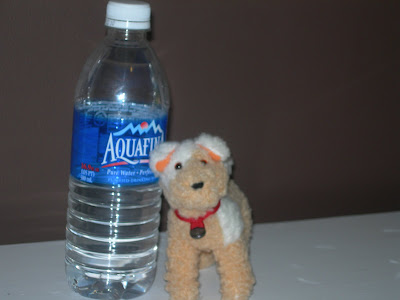 Shortly after arriving in the city, Tom and Jake went to the Museum of Modern Art and Molly and I entered the red awning Mecca of The American Girl Store. I had been planning this for months, and had even bought tickets to the American Girl play. As soon as we walked in, we knew we had a problem. Hordes of girls, moms, and a few bored-looking dads crowded the store’s four levels and all (okay most) of the girls clutched an American Girl doll.

Molly didn’t. I hate to admit it, but she has THREE of these dolls. They are $100 a pop. One we bought, one was a gift, and Molly won the other at a local toy store. You would think we could have remembered to take one of these dolls to New York with us, but with the packing, and the dog kennel, and the train, and everything else, neither “Nikki,” “Emily,” nor “Samantha” made it to the big city.

Molly went into shutdown mode. We had an hour and fifteen minutes before the play started. She wanted her dolls. I wanted chocolate and a diet Pepsi. Girls flitted about, taking their dolls to the hair salon, the doll hospital, getting their photos taken with their dolls, and buying matching outfits. Mothers sagged under the weight of multiple packages, containing doll clothes and accessories that cost more than my entire wardrobe. The bathroom stalls even had special hooks inside-- for your doll.

Molly stood in the corner saying quietly what a stupid store it was and how she wanted to go home. She wouldn’t look at the clothes, wouldn’t marvel at the tiny accessories, and wouldn’t budge. I tried to help her out a little bit by saying things, in a too-loud voice like, “Wouldn’t this pair of glasses look great on your Samantha doll?” and “Your Nikki doll looks a little different than this one, doesn’t she?” or “Can you believe that out of all the entries at the toy store raffle, you won the only Emily doll?”

Her ears perked up a little with my showboating, but it wasn’t enough to encourage her to get out of her funk and start enjoying our big date in the big city. She knew her dolls were at home, she knew there was no way I’d buy her another one just to appease her, and she knew we were stuck there for several hours.

After about 45 minutes of her silent dejection, I pointed out a tiny stuffed dog, retail $18. “This is Emily’s dog, Yank! Would you like me to buy it for you?” Molly responded with, “Are you buying it for me just because I’ve been pouting since we got here?”
“Absolutely not” came my measured response. “I’ve been planning to buy you a special late birthday present here at the store, but I couldn’t offer it to you because you were pouting so much. It wasn’t until you stopped pouting and feeling sorry for yourself that I could buy it for you.” Believable? I’m not sure. But Molly wasn’t the only one trying to save face and make it through this experience.
We ended up buying the dog, one of the cheapest things in the store, and enjoying our front row seats in the corny by inspiring American Girl Musical. We waltzed out of the building hand and hand swinging our tiny red bag between us.
Back at the hotel, the boys, who had spent an educational and edifying afternoon at the MoMA, looked at the tiny dog with suspicion.
Tom rolled his eyes and asked if I had bought it as a reward for bad behavior. Well no, I mean maybe. You see, I remember what it was like to be seven and to have a much-awaited and anticipated event quickly turn to crap. Heck, I know what it’s like to be 38 and have the same thing happen. So, if Yank the dog took the edge off for all of us, so be it.

I have to live up to my self appointed stalker title. So I'm commenting twice in one day. But in my defense - you did write TWO posts.

I can relate to this. I would have been pouting and feeling sorry for myself too. I remember well what it was like to be that age and put so much importance on being the same as everyone else. As if anyone noticed that she didn't have a doll! They were too busy talking their parents into buying them more doll accessories.

Anyway - as a grownup, I'm a lot better about this and take a much more zen attitude about life's disappointments. But I'm going to try very hard to remember the way I USED to be so I can be understanding with my own daughter. Who with my luck will be a tomboy with no interest in dolls! (I'll cry)