Taking Down The Fairies 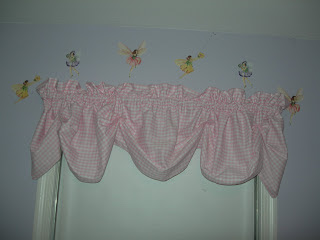 The fairies are gone. After 5 years in this house and almost 2 in the house before it, pretty little fairies pranced and arched their way over my daughter’s windows and across her lampshades. I loved that the little wallpaper cutouts weren’t too cutesy, or trendy. I could have convinced myself that they were so timeless they would carry her into her preteen years and beyond, but that would have been like telling a bridesmaid, “I’m sure you’ll want to wear this lovely dress again.”

Styles change, people change. I get that. I’ve seen people put a great deal of money into finding ideal colors and themes for their kids’ rooms, stating that such and such a look will never go out of style. The thing is, when we choose the decor for our kids’ nurseries we are going with what we like, before we know what they are going to become or what will fire them up a few years down the road. A boy whose nursery has a pro sports theme may prefer camouflage or wizardry when he gets to choose his own décor. How was I to know when I lovingly chose those fairies, to be enjoyed by my little girl for 6 ½ years, that her next great love would be… Leopard print? No amount of rubbing my pregnant belly or gazing into the intense, dark eyes of my tiny newborn would have prepared me for the spunky force of nature now living upstairs.

After I painstakingly peeled off the fairies, saving one or two in her baby book for posterity, I dove into full Leopard (or is it Cheetah?) mode. We decided on a bright pink room with brown accents. I covered her old bulletin board and her Care Bears trashcan with brown fabric and pink ribbon. I ordered leopard print pillows from eBay, and picked up a leopard lampshade at my favorite thrift store. (Note: when you can find a lot to match your theme at the local thrift store, the clock is already ticking on said theme's desirability). I welcomed my daughter’s input, but I’m such a control freak that I deftly steered her away from her initial suggestions of painting a leopard mural on the wall above her bed and leopard spots on her furniture. Yikes. The room is almost finished now and looks great, and I hope that perhaps after this phase passes, although I may be kidding myself here, we can “de-leopard” the room pretty easily and do something different with the bright pink shell.

Just as I could never imagine a day when my son would stop playing with his Thomas the Tank Engine trains, it was hard to believe that the age of Care Bears, Polly Pockets princesses, and fairies would end for my daughter. But here she is, standing on her bed, in leopard pj’s, flipping her hair around as she sings “hard rock” into a pretend microphone -- age 6 1/2 going on 16. For those of you with younger ones, now in the heart of Dora, Elmo, Winnie the Pooh or the Wiggles, cherish these days. The time will come when your kids will refuse to admit they ever loved them. Your only proof will be a well-worn stuffed toy gathering dust bunnies under the bed, a set of character sheets, or in my case, a couple of fairies tucked inside a book. For now, just hold those little ones close, sing along with abandon, and take lots of videos for evidence.

I don't think I"ve done enough for my children.

Have I given them the childhood of memories?

If I truly answered honestly?? You can't do it over..