Guess Who's Not Coming to Dinner? 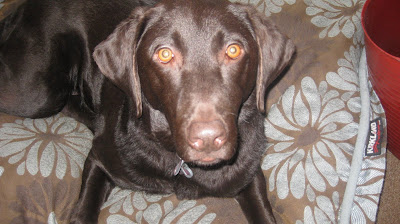 I would like to know why my husband, who simply could NOT wake up to the sound of crying babies, or a fire alarm (when I almost burned the house down boiling LICE combs), shoots out of bed at the earliest "glug glug" of a dog about to vomit. Then he engages in the quick and fruitless boxer-clad, skinny-legged dance of trying to shove a towel under the dog's mouth in the hopes of catching projectile vomit. Priorities, people, priorities.

I got to ponder this a lot this week because I failed on my job of keeping tabs on the dog this week. It's bitter cold out. We don't have a fenced in yard, which no one else in the family considers a problem. I put her out hoping she'd pee quickly while I sipped tea in the kitchen. Unfortunately, I forgot about her, and when she dragged her bloated-bellied self back into the house 45 minutes later she had found a vat of grease to consume. Because apparently some of our neighbors are running an Arby's out of their carport or something.

You may wonder how I know about the grease, but it became abundantly clear the first 8 times she threw up in the next 3 hours. As I cleaned and cursed, I marveled at how a dog could sense that our beloved but long-neglected cleaning lady had come back, for the first time in two months, that very morning. I had planned on basking in the joy of new-found cleanliness for another month or two, or at least until I could scrape up enough money for her to come back. By the time the first night of vomiting was over, Miss Carmen's clean house was no longer. I took daytime vomit duty, and Tom took the night shift.

Not to be outdone by Shadow the Retching Dog, a member of the local rodent population, driven indoors by the chilling breeze, decide to traipse through our kitchen junk drawer that very night. I'm not sure if he was too happy to find the rulers, lip gloss, safety pins, birthday party prizes and cell phone chargers, but hopefully the Juicy Fruit gum fortified him somewhat. Constant crapping must use up a lot of calories.

Two days later, the dog got into OUR trash, which was also my fault, although the neighbor boy who let her out by leaving our door open (in January!) seems somewhat culpable. This latest round of vomit yielded a 3 1/2 inch plastic needle. We are somewhat grateful she survived.

So while I'd like to say I've been crafting and decorating and generally making the world a more aesthetically pleasing place, I've been cleaning up mouse poop and vomit and watching a lot of late night tv.

And I'm guessing you won't be knocking on the door of Chez See anytime soon for a dinner invite.

Poor you! Poor Shadow! But mostly poor you!

Poor baby. I hope she is feeling better by now.

Oh man, what a lovely way to enter the new year! There is something especially nasty about dog vomit. Well ALL vomit is nasty but....you know what I mean, right?

So sorry, hope said dog learns to be a more finicky eater!

Oh man that just sucks. I don't know which is worse = your house or mine. Sick kids, sick husband and a mom with a real case of the winter blues. Wah! I want springtime and I want it now.

So sorry. We have the regularly barfing cat over here (the geriatric one), thankfully the kitten hasn't barfed, yet. ~LCD

ugggh. there is no more frightening noise than the sound of a dog pre-hurl.

Anna - you are just NOT furthering my husband's cause when it comes to eventually convincing me to buy a dog... I was previously fixated on the picking up their poop part - but dog vomit? No thanks.

Love the image of T leaping out of bed to catch the puke.

Poor you, poor puppy, and I feel your rodent pain.

Yikes and yuck. I remember those days with our old yellow lab. Chewing discarded cans and their contents was his specialty. I currently have pukers of the human variety at my home. Kids and husband alike. Why is it always the mom who stays well enough to clean up?

Is that a look of remorse or relief of Shadow's face? :)

A few months ago, we were this close to becoming owners of not one, but two miniature terriers. As they tore through our house on a visit, bounded upon the tops of our couches, and gave me pause to consider the fact that our backyard is also not fenced, I took tremendous comfort in the fact that we soon decided we have two humans in the house who are capable of doing all the things these dogs could do, and they were enough, thanks.

(and I somehow find a way to let their father take on the night time vomiting details...)

That is awful!! Really awful. I don't even know what to say... I'm tired just thinking about this. You poor thing!

I always had to clean up the dog puke and after your story, I don't miss it...

I never let my dog off his leash for that very reason. Wouldn't you think they would know what is good for them and what isn't? NOT

I don't do vomit because, sadly, I'm a gagger. Piss, poop? No problemo, but when the dog starts making that sound (or the cat that weird clicking pre-puke noises), I set land speed records and do a lot of putting fingers in my ears and singing "lalalalalalalalalala" to drown out the noise. And our lab will eat ANYTHING, so I sympathize. You're a better woman than I, Anna.

Last week when I was up in the wee hours of the morning cleaning for my cleaning lady to come I could have sworn I could smell vomit. I leaned into the door of my girls room--the smell got stronger--and convinced myself it was the smell of a diaper. Wishful thinking because an hour later I could hear the actual vomiting. Sure enough Lexie was caked in crusty old vomit and new wet vomit. Super proud parenting moment. I canceled the cleaning lady.

Yup, it seems that husbands only hear what they want to hear.

Oh my gosh I'm laughing and crying and retching all at the same time!

My boyfriend will slept through anything, included me coughing up a lung, tornado sirens and trees falling. But when it comes to the beloved pooch wretching he's at the pups crate in seconds. Not because he doesnt want him to barf on anything, but because he feels bad for said pooch. After puking and cleaning my bf will cuddle the dog and feed it icecubes and water.