Social-Networking Butterfly? OR, If the Fleece Fits, Wear It 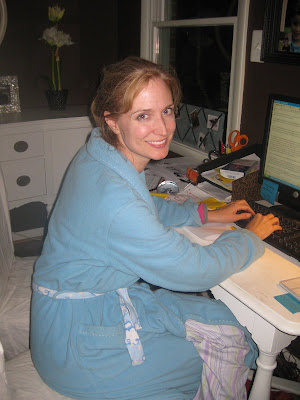 I know a lot of people have blogged about Facebook. In the months since I joined, Facebook has really cut into my blogging (and cooking, cleaning, paying attention to the kids) time but this is one of the first times I’ve felt like writing about it.

I recently realized that when I see my Facebook friends comment on dinner parties and other shindigs they’ve attended, I sort of feel left out. This is because I balance that lovely dichotomy of feeling like a complete nerdy misfit while also thinking that the entire world revolves around me .

So, if a neighbor puts pictures of a party on Facebook, or someone else writes about a Girls’ Night Out, I’m bummed about not being invited. I don’t think it’s at all tacky to put pictures like this up… I just have a wee bit of social envy. And it’s not as if I am dying to actually GO to these events—the fact that I’ve donned my fleece bathrobe by 6 pm four out of the last five nights might give you a clue that I’m a serious homebody. A homebody who wants to be asked.

I don’t know but this could stem from the fact that I was never invited to a boy/girl party in Junior High. I now consider that to have been divine providence, but at the time it felt downright cruel. New Year’s Eve 1985 didn’t help either. My mom drove me around looking for “THE party” at Tommy White’s. We just could not find the darn house! After several attempts, we had to give up. This is pre-pre-pre GPS and cell phone.

I lashed out at my mom, who just wanted to spend a quiet New Year’s at home in her bathrobe not carting her weeping daughter around the darkened suburbs. My best friend (and blog reader!) Lisa G. borrowed the phone to call periodically and update me on the rockin’est party of the year and to encourage me to keep trying. My pain was deep. I cried my 10th grade self to sleep right around midnight, bemoaning the misery that was my life. To this day I can't bear the idea of other people having fun while I'm not.

Sooooo, be it a bat mitzvah in Boise or a baptism in Bellingham, I want to be included.
When Tom surprised me on my 40th this month with dinner out with 8 friends, I didn’t put pictures up on Facebook. If any of them had been super-flattering of me I admit I would have reconsidered, but really I just didn’t want to leave someone out. Even if those some ones were people I hadn’t seen since 6th grade student government camp.

One option to rev up our social life would be to entertain more ourselves and be the instigators of fun social events. But that takes time, energy, and gumption, which seem to be in short supply at the See house these days.

And this weekend? We were kindly invited to an adults-only Halloween party for the first time EVER! We can’t make it for multiple reasons, one of which just might be the siren song of my blue fleece bathrobe, but I must admit it was awesome to be asked.

So I’m wondering… does Facebook make you feel more included or more left out?

Email ThisBlogThis!Share to TwitterShare to FacebookShare to Pinterest
Labels: blogging, entertaining, Facebook, I am a dork, social life

You know, I spend way more time blogging than on FB. In fact, I only check FB about once a week, if that. It's too overwhelming for me!

Facebook sucks the life out of me. It is so addicting. Do you think they have a facebook anonymous? I wanted to cry for you about junior high - that is the meanest, cruelest time of a girls life!!! lol FB also keeps me from blogging....it's so sad :(

As far as feeling left out - most of the friends that are my age that I talk to live out of town.....that helps!

Facebook has been a great way to reconnect with old friends... Funny, but I don't feel left out when I'm not in those party pictures. I'm so much of a homebody that not even seeing other people have fun can cause me a twinge of regret!

Anna my friends and I are having our 3rd annual Pumpkin Carving Extravaganza. You are invited...and so is your blue fleece robe. :) I don't always put pics up of parties that I attend/host for the same reason--I can't invite the whole world so I don't want to make people feel left out.

Like Kristina P, I'm a blogging girl through and through. I mostly use FB to connect with my college kids.

I feel the same even though I probably don't know the host or most of the other attendees.

This weekend don't be bummed if we post photos of Helga's birthday celebration - you were invited and will be missed!!!!! Karen can't come either - flu :-(

facebook has run my life this week. . . but being in student ministries, it tends to. and it's hammered into my blogging life, but that is because i've been (and still am) super super busy.

i see the effects of fb on my sophomore (high school) girls. . . the left-out-ness, the desire to splay out your entire life for everyone to see. the very public breakups.

fb didn't cause the suicide, but it was played out minute by minute.

i'm shaken. and sad. and spent.

thanks for sharing. i can totally completely relate.

I hate being left out too. Similarly, I'm mostly a homebody. What are we to do?! I don't mind the pics on FB though. Hosting is a great answer and I've found that asking that mom that you sometimes see at the school but you seem to click with is a great way to find a new circle of friends. We did that and it worked out beautifully!

I think I am you.

Except that I don't do facebook because I am sort of scared to.

(typing this in my robe)

Not so left out, not so included. Most of the people I know in real life aren't actually on facebook, so it's more for acquaintances.

I hate Facebook. I am ready to admit that I have become powerless over Facebook, so I am switching to Twitter. Which probably makes as much sense as when I decided to take control of my life by switching from Grey Goose to Chardonnay.
That helped.

I grew up with a very, very practical view of invitations. The guest list can only be as long as those the host is able to provide for. And I did not live among the well-to-do. I never expected a big party. And I never expected anyone else to have a big party. In my ultra-rational mind this was the rational conclusion: It is more likely that I will NOT get an invitation to any given party. And when I do get an invitation it is a nice surprise. My feelings were never hurt... its just how the numbers work.
So maybe it was obvious that I was going to be a math teacher all along?

What I love about Facebook... I can be included in all of those things that it is impractical for me to be invited to or attend. And when my lucky number is up & I do get an invitation, I am not left out of the conversation.

I feel your pain. Glad to know it's not just me.

I wish I had Gail's attitude and I wish I could teach my kids to think that way but the excess is unavoidable where we live. My 5 yr old daughter went to a birthday party last month that had 2 bouncers, a magician, a balloon twister clown, and live music. I didn't stay for the food but when I glanced over, it looked catered. I know they invited all the kids in the class but I'm sure some neighborhood kid or church friend felt left out.

Anyway, I have no idea what 10th grade New Year's party that was. And I think it's terrible that your memory of not going is obviously stronger than my memory of going.

Re Facebook, I have a couple of friends who feel the need to post something about every dinner party and outing with friends. I find it annoying and a bit like bragging so I 'hide' those friends comments and just check their pages when I want to know what's up with them. One person felt the need to upload photos from her phone while on vacation with mutual friends in the Caribbean. I'm happy that they're having a nice time but I don't care to see them in the airport together or posing in front of various parts of the hotel each day they are there!

Thanks for this post. Lately I've been reevaluating my blog...its purpose and future, and this has helped me to shape those thoughts a bit more.

I just caved in and joined FB b/c people kept saying, "Why aren't you on Facebook? If you were on Facebook we could totally stay connected." So I joined against all of my better judgement. I have no idea what all of the hype is about. I really don't get it. But I'm all about going deep in relationships and being authentic and that's hard to do (impossible?) on FB, so maybe that's why I'm not thrilled with it. And don't even get me started w/Twitter...

Maybe I'm a weirdo but, honestly, this never even OCCURRED to me. I think it's sweet that it means so much to you to be invited, though -- and it will definitely make me think twice about including everyone when I can!

I'm not on Facebook, but I can sympathize. Nobody likes the feeling of being left out. Even if you don't want to go...I'm with you...I like to be asked. :)

so few of my Facebook friends live here that no, I don't. If I were in NY, then it would be different.

I've felt the same way. I have even felt like some people I know locally publish things intentionally b/c they know I'll see it. That really bugs me.

Honestly, I'm trying to let my love for FB go, especially when it makes me feel the way you described perfectly.