On ZipLocs and Freedom 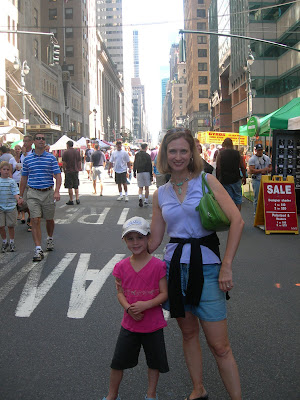 We spent the last week in Connecticut and New York City. There was a lot of blog material, including a celebrity sighting that I’ll fill you in on later. Today, however, I’d like to give you a little glimpse of the beginning of our trip.

Since we were already in CT, we decided to take a train from New Haven to New York City for the weekend. This was pretty big stuff for suburbanites like ourselves. We pulled our minivan into a parking lot clearly marked “Train Station Parking.” It wasn’t until we paid our $18 that we realized that this was overflow parking, the station was several blocks away, and we were in a particularly seedy looking part of town.

The four of us unloaded our stuff, and started walking to the station, the kids dragging their little pink and blue duffle bags behind them. We walked past a lot of trash, chain link fences and under a pretty scary bridge. The eeriest part was the streets were almost completely deserted.

A big building loomed ahead with a few people smiling, smoking and laughing on the front steps. It was a police barracks, and although I saw no law enforcement officers, I instantly felt safer.

Then I saw the people were holding clear plastic ziploc bags. I saw why they were smiling. They opened their bags and put their belts back on and re-laced their boots. High fives all around. I’d be smiling, too, if I were experiencing my first taste of freedom in a while. Instead, I shot Tom a look and encouraged the kids to pick up the pace a little.

I'm not sure what this says about our assumptions. We were probably perfectly safe, but I wondered-- would this trip prove too much for these nervous nellies from suburbia?

Kiiind of a feel good story... I mean - I was happy for the cons being on the outside again...

But I know what you mean. I used to wander around my city neighborhoods half oblivious to the shady characters and half monitoring them for signs of taking an interest in me. And when I went to college in the Bronx (Fordham's Rose Hill campus), I was one of the few students (at least female students) I knew that would walk several blocks to the subway when I wanted to go to Manhattan.

But now - I'm a total suburbia convert and I value my easy existence of unlimited street parking and lack of panhandlers. It's a good life - you know?