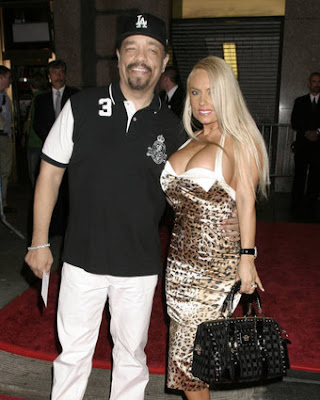 We were strolling through Times Square on Saturday night, looking for a place to eat dinner. We wanted something distinctively New York, but we didn’t want to pay a fortune or have the kids embarrass us. That cut out a lot of options. When we finally saw a Mexican chain restaurant “Chevy’s,” I said, “Let’s do it!”

Tom rolled his eyes, thinking it a bit pedestrian, especially since we have one in our very own town, but I was just excited to find something we would all like. When we walked in, another party followed us.

With a quick glance back, I saw the most bodacious pair of breasts imaginable. These things were enormous. They were only minimally covered. They appeared to be “working breasts.” I don’t mean that in the same way that my own, marble in a tube-sock, saggy from breastfeeding, breasts once gave my little ones sustenance. These appeared to have been purchased for a specific mission or purpose. I was so busy glancing while not appearing to glance, that I barely noticed the woman’s 3 male companions.

We walked up the large staircase together and waited to be seated. As we walked to our table, I recognized the distinctive voice of one of the men. It was rapper Ice-T, one of my favorite actors from Law & Order! The breasts belonged to his Playboy model wife Coco! I was so glad that they were seated two booths away. This provided us the perfect buffer to tell the kids who he was, and to shield the kids from a view of the boobs.

We had a fantastic dinner, and enjoyed giggling about our small brush with fame. I felt vindicated when we had the best guacamole of our lives and because if a famous rapper and tv star would eat at Chevy’s, perhaps it wasn’t such an odd choice while out in the big city.

The kids wanted me to ask him for a picture, but I didn’t have the nerve, so here is a pic of me with my real iced tea, with Ice-T’s head in the background. Can you see it? 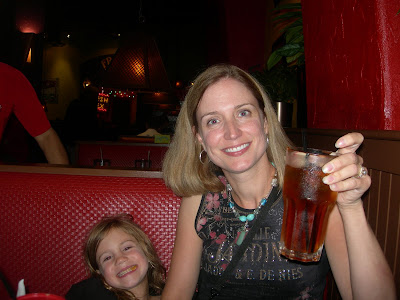 If it's too blurry, and I think it is, I will provide you with a shot of Tom and the kids in their best rapper poses. I guess now you can see why it's good there was a buffer zone between the See family and Ice-T. 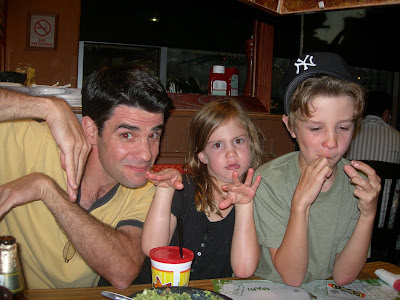 That is an awesome brush with fame.

Please tell me she wasn't wearing that dress at Chevy's.....

I was thinking the same thing Karen did! I prefer the family rapper poses.

The dress was very similar to this one. I wonder if she was cold. Although if she was, we probably would have been able to tell.

If her pose is any indication, Molly's got some career possibilities there.

Funny! I wouldn't have asked either.

wow! you got to drink real iced tea in the presence of the rapper Ice-T! way to be thinking on that order. i would have ordered diet coke and missed that opportunity!

Just followed you from AllMediocre...

Ice T? My husband would have been over there in a flash. And he is normally unphased by fame.
He used to make me listen to Ice T in the early 90s. Wow, that makes me feel old...

Funny story. You should start a blog where you collect such occurances. You could call it 'Who's Boobs are You With?"

oh my goodness. that picture of the sees is my favorite thing. look at them! i love you guys! rapping! you're fun.