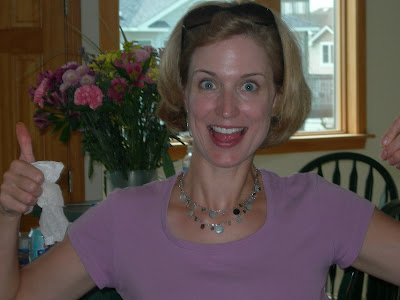 Do you ever look like a raging lunatic? I know I do. It runs in the family. My sister called to tell me that she pretty much went nuts at a kiddie pool party last week and looked fully certifiable to all present.
Basically, she was holding all the s’mores fixings and felt set upon by mobs of little kids pushing, grabbing and waving sharp metal sticks at her. Breaking out in a sweat, her glasses sliding down her nose, she found herself glaring and yelling at kids right in front their parents. She may have frothed at the mouth; I wasn’t there to see.

I feel her pain. Now she’s going to have to be on high alert to try to act extra normal in front of this crew when she sees them in the grocery store, at church, etc. Not an easy feat, especially after a summer home alone with the kids.

Well, I can relate. The craziest I have ever appeared was when another teacher asked me to cover his class of 12th graders while he ran an errand. In the course of a discussion, one kid made a comment about “white trash” and I went ballistic. I thought I was cogently explaining how offensive that term was to all races, because by stressing “white” trash, there was an unspoken assumption that black people were trashy, but as my voice became shriller and I became more agitated, I realized I just looked like a crazy person. Nothing I said made any sense. Word swept through the halls that while Ms. See might be kind of cute, she was a nut-job.

More recent examples of my lunacy are when I get peeved by the way another kid is treating one of my kids, so I find myself stooping way BELOW their level. Hello? Being snippy with toddlers is not attractive in a 38 year old.

My own kids have watched wide-eyed at my door slamming, huffy tantrums, often when I can’t take one more argument about lumpy socks, or when my blood sugar starts to plummet. Watch out-- crazy lady on the loose. I’d like to be a calm, even-tempered person. Considering my own vivid memories of my mom reduced to tears in the car by 3 kids’ backseat bickering, her head immersed in a bag of orange gumdrops, I doubt there is hope.

LMAO@pp comment....why am i laughing ummm because it does help...

OHhhh I think we have all been there a time or two or three or...