I went down to the basement with Andrew early Sunday morning. Toys were everywhere from his playtime with Daddy the night before. I picked up dozens of Hot Wheels cars, tossing them back into their bin. I knew that cleaning up didn't make a whole lot of sense because the day was VERY young, and the toys would be used again and again in the next 13 hours.

Is it terrible to already be thinking of bedtime before you've had your first cup of tea?

The plastic train bin was dumped as well.

I'd debated pulling out all of Jack's trains for Andrew. I remember what a HUGE deal it was to anticipate and plan for each one. Each new train represented a holiday or milestone in his young life. If Andrew started out with a complete set of Thomas trains, all jumbled in a bin, they would never be as special as they were to Jack, who slept with the train catalog under his pillow. When things come too easily for us, it's hard to appreciate them.

I remember how Jack would quiz me on each train's name and number, and after all these years, I still know them. The funniest memory was when he convinced us there was a train named Scarbuffle, Number 17. Scarbuffle was one of the gang and was included in all of our Jack's quizzes and train stories, but he existed only in Jack's mind. It was fun to realize that such a structured, orderly kid had an imagination too.

I decided to give Andrew all of Jack's trains, because I know something else will take hold of his passion-- whether it's trucks, superheroes, or something else entirely. To him, the trains can be just regular toys.

Sunday, after I tossed all of the trains back into their plastic bin, I felt something sharp under my bare feet. I wasn't surprised to see that there had been debris in the bottom of the bin. We haven't been in baby mode for many years, so I've had to be vigilant about sniffing out tiny vehicle tires, screws, and legos from our old toys before Andrew can put them in his mouth.

I bent down to scoop up the tiny sharp objects, before they attracted his attention. They were small and white, shaped like hearts or birds, but what WERE they? Puppy teeth? Mouse bones? 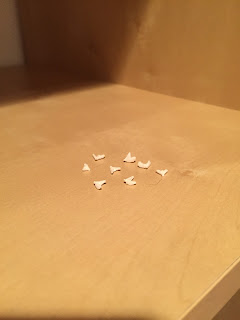 They were the white DOVES that come out of sand dollars when they are cracked open. Technically, they're the sand dollar's teeth, but according to the legend of the sand dollar, they represent doves that  stand for peace or goodwill.

Jack's trains had been closed up in a bin for a very long time, perhaps a decade or more. I assume the doves are from when I must have shared the legend of the sand dollar with the kids at some point. I'll have to ask Margaret. She remembers everything.

How interesting and fun to discover these little doves when Andrew dumped the trains. 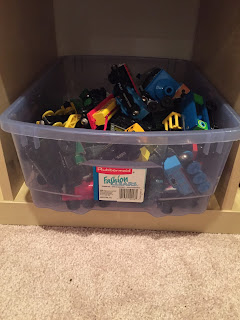 They were meant for you to find today, Anna.

"When things come too easily for us, it's hard to appreciate them." BINGO! The very thing I was struggling to articulate to my husband yesterday regarding our 16yo daughter. xoxo

I LOVE your writing, but this blog post really hit the spot! My first guess was puppy teeth, but as soon as I read the comments, I went "ooohhhh yea"

Definitely a God wink...strange how things happen sometime. Enjoy your little one, even tho it is exhausting.

What a bittersweet story. Such sweet memories for you. I'm glad that Andrew can play with Jack's trains and toys. That must make your deep loss easier to bear. And love the God wink! ((Hugs))

What a bittersweet story. Such sweet memories for you. I'm glad that Andrew can play with Jack's trains and toys. That must make your deep loss easier to bear. And love the God wink! ((Hugs))

A firm believer in those little nudges from God ...

A God wink! I love that, never heard of that before. And the "doves" are precious, especially tucked in with the trains. I think Jack would be very happy to share his trains with his brother.