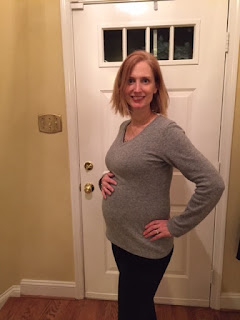 
After church today, we stopped by someone's house to pick up a maternity dress I'd bought on a yard sale site. As I got out of the car, I stumbled in my boots and pitched forward. I don't know where I start and stop these days, so keeping my balance is a challenge. Righting myself, I continued to the door and grabbed the dress, leaving the money under the mat. But by then, tears had sprung up in my eyes.

I'm not sure why I was crying. I know it was scary to think a fall could have hurt the baby, but I didn't even fall. And I know that I don't have a good relationship with driveways since I blew out my shoulder on ours 2 years ago.

But to start crying?

I haven't cried ONCE over the fact that I'm 46, pregnant, and scared, and that starting over feels like both a blessing and a burden.

I haven't cried for Jack in a while-- not on Christmas when I bought a present for him to "give" Margaret, or when I patted his empty stocking, as if somehow wanting him here enough could make it so. Not even at New Year's, which conjures a host of unwelcome feelings, particularly about leaving him further in the past.

I haven't cried over lack of sleep, which sometimes amounts to just a few hours a night because of sore shoulders and a tiny bladder, although I know that sleep deprivation is taking its toll, and I worry it could set me up for the unfamiliar territory of postpartum depression.

Heck, I haven't even cried over the indignity of varicosities so elephantine they make standing and walking difficult, intimacy impossible, and, well, just bum me out on a daily basis.

As we pulled out of the driveway, Tim reached over to touch my hand. "You ok?" I nodded, but kept crying softly. Margaret was quiet in the back seat.

I guess sometimes we cry over nothing, like stumbling in a driveway. And sometimes nothing feels like a little bit of everything.

Hugs. There's only so much you can handle before you have to let a little bit slide out the corners of your eyes.

Sending a hug for you.

be kind to yourself. I felt tears for you just reading this. God be with you in this new journey.

Oh goodness, I have been crying for a myriad of reasons every day for all of winter break. I'm crying now. It's so okay to cry. I hate that we wonder at it, after all, we don't wonder at smiling or laughing.

And the weird thing? At times the crying has felt wonderful. I'm glad I've been able to let it go...

It's the possibilities. So many possibilities and the whatifness of it all can sometimes come out of nowhere. Give yourself some gentleness. Tears refresh.

I always feel like every time I cry over something, something good or positive happens relatively quickly after. Does this happen to anyone else? Thanks for sharing your vulnerability..that in of itself will help you tremendously! Still can't believe you are pregnant...it's just so awesome. All you need is that baby in your arms!

It happens. The other day I started crying on New Year's Eve. My husband was confused and I had to dig deep to where it came from. It turns out New Years for me is associated with people being drinking too much. My dad died of alcoholism and spent time in jail for drunk driving. I don't do well around people who over drink so New Years isn't fun for me. It took me awhile to figure this out. I think that yours is much closer to the top. No matter how much you love this new baby, and you will love him to pieces, you will always miss Jack. Sometimes those tears come from a very deep place. Hugs.

You look beautiful and this makes all the sense in the world. Sending you love and reduced varicosocity!! Varicoseness? xo

that last line so true <3

Anna, I just finished reading Rare Bird and when I saw Jack's beautiful face on the back page I just burst into tears. The book was incredible. And although I'm still so heartbroken that he isn't physically with you anymore, I'm so happy and excited for you and this new journey you and Tim and Margaret and Jack, and baby Donaldson are on. You said so many times throughout the book to just let yourself feel whatever it was you felt, and "rest in love". I love that phrase - "rest in love". I hope you always remember to do so when you need to, and please know you continue to teach and show others to do the same! Sending love to VA.

Sometimes nothing is everything, and everything is nothing. Thinking about you.

Ugh... so hard... a whole bunch of stuff... crying allows more room for joy to come. Praying for you all.

Hugs to you. Let those tears out....praying for you. XOXO

I get it. Just cry when you need to. I have cried over many an unexpected nothing. Hugs to you. xoxo

Thank you for sharing, Anna. I am astounded to hear about your lack of recent tears and absolutely not at all surprised to hear a little blip-trip brought them on. I feel like everywhere I look lately - Martha Beck in the current O magazine, the movie Inside Out, Albus Dumbledore - someone is telling me to get present to sadness. To feel. I need to do some writing of my own to process it all, but I wanted to at least share that with you. Sometimes crying is the most cathartic thing, and sometimes it comes just when we think we need no catharsis. Sending hugs. And tissues.

You are in my prayers dear Anna. Sending you love and hugs, too. XOXO

When I'm pregnant, I cry over all the wrong things. Hang in there. And support hose really do help (says the woman who had to wear them IN AUGUST, AT THE POOL).

I've cried everyday since my daughter died but New Years Eve was unbearable. The first year she won't physically be a part of. I wish I was in that driveway with you. We could have shared my paper bag to breathe into. Much love sent your way. Andrea

Sending love and hugs, Anna, and sending prayers too.

This time of year is so heavily weighted. Even when things are on an even keel, the end/beginning of the year is emotion-filled. You have many reasons for something like a stumble to drive you to tears, especially now. Be kind to yourself. Love to you. xoxo

And this makes me cry too. Love you.

Hang in there, Anna. So much to carry, but your grace, even while stumbling, shines through. <3

The struggle to find one's footing (literally or figuratively) sounds like a valid reason to cry. Hugs from across the internet. Best wishes for the New Year and all that is to come.

You're looking great. Don't worry about the tears - you're allowed to cry. One of my new year gifts to myself is permission to cry more. Gave myself a blessing to laugh more too. We need them both. Cheers to you, Anna.

I'm 36 years old and 21 weeks pregnant with our fifth, miscarried our fourth early last year. I cry ALL THE TIME so I have no idea how you made it 25 weeks without crying once, particularly with everything you have been through! We lost our little niece last summer in a terrible accident. I was very emotional on New Year's Eve, thinking now her parents will have to say it was "last year" that she died. Praying for you that you stay strong for your family and yourself. And as my 6-year-old daughter would say, "There's nothing wrong with crying!"

Hugs Anna!!! Sending lots of love and positive vibes your way... P.s. Nothing wrong with crying -- I feel it's your body's way of purging the sadness and letting light in...

In preparing for my Circle meeting tomorrow, I came across this quote from Anne Lamott and thought of your blog post that I read earlier today. She said in a Facebook entry about her book, Small Victories: Spotting Improbable Moments of Grace, "...crying is the most healing thing of all: it bathes us, hydrates us, baptizes us, waters the ground at our feet, for new life." Just wanted to share that with you. Blessings for your journey and much thanks for taking your readers along. Ruth Anne

I've cried nearly every day for the past 7 weeks, over little things or almost nothing at all. (Not pregnant but severely broken ankle and taking medications that mess with my ability to keep it all together... or maybe I just can't keep it all together... it's had to tell.)
All that to say, you are in good company, as many of the above commenters attest.
And you are being prayed for.

Thinking of you Anna:) I've certainly had moments like this. I know the feeling. Hang in there girl....Get through the winter months being all cozy and toasty and cuddled up ...with the doggies. :) Love ya, Cindy C

Look at all the love, validation and comfort here for you. Any and all of us ready to hold your hand & wipe your tears. Adding more waves of love to those already bound for you.

Anna,
Thank you for your transparency and for sharing your journey. Even though we have never met I think of you often and I admire your faithfulness. God Bless you :

Ahh you made me cry, maybe that's good, I stole some so there's a little less for you to shed xx

Maybe that little unexpected jolt jarred loose emotions -- fears, excitement, exhaustion -- that had been bolted down. You look so terribly cute. xoxo

Oh I know about those awful varicosities! My husband would joke that I was wearing a pregnancy jock strap. And the thing didn't even help all that much, though at least I could be upright without major pain then. Things got a little better when I started wearing support hose too, though they are such a pain to get on and off. When my water broke, I remember rushing into the bathroom to stand in the tub with all my clothes on. I started stripping, took off the hose and began to rinse them out in the shower water - habit, from rinsing them out every day. Suddenly I thought, no, my water is broken - I am never going to wear these again! And I threw them and my "jock strap" across the bathroom with such glee...

And the varicosities mostly went away on their own after, so don't worry!

I praise loudly. I blame softly. See the link below for more info.

I am just catching up--sorry to be so behind!!! BUT yes, crying while pregnant is some form of necessary release. I cried the other day at Mcdonalds because I "NEEDED" a McFlurry and they were out of ice cream. ugly, couldn't stop devastated crying. I think we try to hold things in and tough it out and then one day we just lose it over something that really is ok....and we are in fact crying over everything else.