I tried not to write about it, knowing that most people tweeted and Facebooked their reactions bright and early on Sunday morning. Even I dusted off my twitter account with this tweet, which found its way onto Mashable: 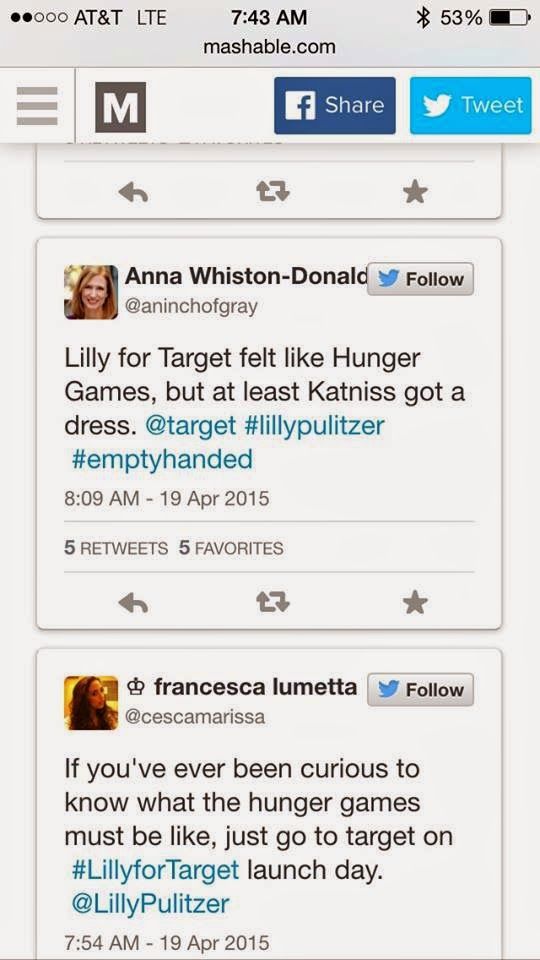 But you know me-- I've never been current with anything, as evidenced by my stirrup pants in the mid-90's.

I want to share with you the bizarre experience (non-experience) of hitting the Lilly Pulitzer sale at Target Sunday morning.

I am not a Lilly girl.

I've never had a stitch of Lilly Pulitzer clothing, although I must admit I've admired the cute and colorful little girls' shifts for a long time, and I like preppy clothes. When Margaret began plotting and planning for the Target sale several months ago, I learned that Lilly is reaching a new generation.

Margaret made a wish list, counted the money she had saved up, and even negotiated with me an advance on the 3 remaining baby teeth she has left to lose.

She read blogs for sale day strategies: "Hang out near the dressing rooms to find what others have discarded," and found the store phone number so we could call ahead to check the store hours.

As a parent, I enjoy getting into what interests my kids. With Jack that meant listening to the ins in outs of Legos and the Harry Potter series. For Margaret, lately, it has been learning new makeup techniques, finding out that full brows are back in, as long as they are "on point" and yes, getting up extra early on a Sunday for a special sale at Target. And, if a cute and colorful Lilly Pulitzer home accessory or bangle came my way, I certainly wouldn't spurn it.

Well, you probably know how this tale goes. We got to the store before it opened, joined a surprisingly long line in the parking garage, and waited our turn to enter. The doors opened at 8:00 and our feet crossed the threshold at 8:03. Though the glass doors at 8:02 I could see patrons mouthing something to us. Were they really saying, "It's all gone?" What?

It was kind of like when a nice old man stands on the side of the road waving wildly and saying something to you, but you don't understand what he means until 100 yards further up the road when your path is blocked by a fallen tree. He has tried to warn you, but you don't put two and two together until you see it for yourself.

What Margaret and I saw was one small, empty rack in the women's department and one in the girls' department. We saw maybe 8-10 people checking out, floral items piled high on the conveyor belts.

"We might as well try the dressing room thing," said my defeated girl, but when we made our way there, no one was trying anything on. It had gone straight from the racks, to the lines, and was making its way out the door, before 8:05 a.m.

I had been thinking of how smart Lilly Pulitzer was to court teens with low priced items (the shorts Margaret wanted were only $12) and establish a relationship with them while they were young. It would have been a great move on their part, especially for young, label-conscious teens whose moms never introduced them to the brand and are not willing to pay boutique prices for clothes. Perhaps when those same teens grew up, they would already be loyal customers.

Margaret was most peeved at the ladies dressed head-to-toe in Lilly, who heaped the clothes on the belts, "They can afford them already; why do they need to buy the stuff I can afford?" she asked.

But as I stood there, a different thought came to me: that there was never any intention of having supply meet demand. To do so would dilute the designer brand. I'm not sure what the intention was, but the experience left me annoyed and Margaret mad and feeling foolish. I wanted to refuse to ever let her buy anything Lilly Pulitzer.

First world problems, for sure.

After a cup of tea, we headed to church for a little attitude adjustment. Later that evening we found out that a friend had a Lilly shift dress that her daughter had outgrown, so now Margaret is rocking the pink and she didn't have to spend a dime.

This annoys me...why do people have to buy more than they need? Ridiculous.
This sentence however cracked me up..."and even negotiated with me an advance on the 3 remaining baby teeth she has left to lose."
Very thrifty of her. So glad this story has a happy ending.
Meg

I think Target could have placed an item limit per customer, so that the fun would be spread around a bit more! Maybe they didn't expect such craziness?

Were you at Mosaic location? It was crazy. If I had known she was looking, I would have saved her some stuff that I put back. What is she looking for? Will keep my eye out when I go check for returns (kathctucker@gmail.com)! There is supposed to be an influx of returns over next 2 weeks once online orders are shipped.

heavens! You are coming to Roanoke next week to stay with my friend and speak at my church. I will pull something from our lilly collection for your daughter.

I meant to say you are coming next month! (Roanoke, VA )

sadly i think so many of these ladies are just going to resell on ebay. :( it's sick!

I'm not a Lily fan and didn't even know that they were teaming up with Target to do this...until my Twitter feed exploded with people being ticked about everything being snatched up AND how furious they were that the items were immediately listed on eBay for double or triple than the list price.

Well, I seriously feel out of the loop. I go to Target several times a week and I didn't even know this way happening. Wow! Crazy! Thanks for sharing. I love all your writing! Makes me laugh and get frustrated! Happy Margaret got a dress. Much love,Jen

What size is your daughter? I went and got a few things for my daughters and they don't fit so I am actually returning them. If she would be interested I will just give her one of the dresses I have.

I'm sorry for the Target experience, but I'm glad Margaret did get something, for free no less!

I think that the whole thing was a huge publicity stunt. I love Target but they really sucked this time. I have an ebay consignment business and sell lots of (non target) Lilly. There's tons of it on eBay and the real stuff had to be better quality than the target junk.

As some have already attested to, those women "stocking up" on Lilly were headed to their computers afterwards to re-sell items on Ebay or other online sources. Target, and every other chain store, should really limit the amounts any one person can purchase when they launch such items. If they cared more about their customer base than the bottom line than is. Glad that your daughter rocked Lilly at the end of the day.

OMG I just went to look at the site (Lilly Pulitzer)they are cute but the price!! Way out of my budget!

OMG I just went to look at the site (Lilly Pulitzer)they are cute but the price!! Way out of my budget!

How old is she? A girls Large is a 12 in Lily for Target. I have one pair of shorts in that size that did not fit my 13 year old, they were too small. But no dresses in that size they were all 6, 7/8. But I am happy to send her the shorts which were my 13 year olds favorite so she was bummed they did not fit. Where do i send them? Let me know how to get in touch privately.

I was at my target in Boulder colorado at 9:30 am!

Would you mind sharing her wishlist and sizes? Our store last night had girl clothes returned and I would love sending Maragaret something if it's still around!

I am a few items (mainly accessories) I might return. Happy to send pictures to see if she is interested. Sadly I can't afford to give them away but will sell at cost.

You all are so sweet! I would be happy to see if what you bought will work for Margaret and could PayPal you the $. Here's my email if you want to let me know what you have. She is a kids' large (or medium).

I, too, was one of those people that showed up to the store early (with my bemused husband in tow) and was so annoyed to see people checking out with 10-plus items in such varied sizes that they clearly planned to just sell on eBay. Plus, as I was reaching for a dress in my size, a woman grabbed the hanger from the other side, and when I said I was already picking it up, she looked at me and said, "I'M NOT LETTING GO." Can you believe it?! Not feeling too warmly towards Target in the aftermath...I hope they limit purchases for these special lines in the future.

Well I learned something new today. I had to Google who Lilly Pulitzer was. Sorry that the experience didn't turn out as planned. I have to say that her fabric patterns are lovely.