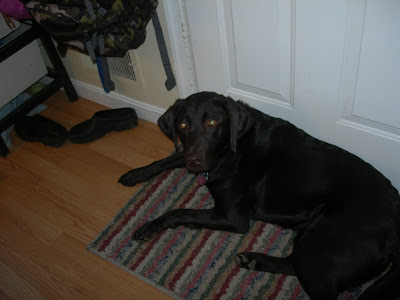 My new job and I have excellent bathroom compatibility. Mine is the only office on one level of the building. There is a large well-lit bathroom in the main hall. I don’t use that one. I prefer the one down a secluded hallway that I like to pretend is all mine. It has two stalls. Number of encounters with another person in “my” bathroom over the last five months? Zero.

This is much better than at my old job teaching high school. That bathroom was carved out of a corner of the teachers’ lounge. Picture this: 8-10 people pulled up around an old cafeteria table, using their whopping 20 minute break to munch away on PB& J and discuss Mark Twain or Toni Morrison or Monica Lewinsky. Dusty textbooks lined the walls, and 3 feet away? A unisex bathroom. The creepiest part? The door was one of those slatty panels. Not sound proof. Not odor proof.

You can imagine how weird it was to be eating my mug of Progresso soup around a full table while mere feet away one of my colleagues was using the facilities. Don’t even get me started on how gross the concept of having magazines in there was.

The alternative was to use the student bathrooms. I was lucky to have one directly across the hall from my classroom. I liked the shocked looks on students’ faces when I’d stand up and they would see a teacher’s head rise above the 4 foot high stall walls. I could almost see their brains going back over whatever urgent, inane, and perhaps illicit matters they had just been chatting about. Drawbacks? Occasional cigarette smoke, the F –Bomb scrawled on the wall, and the lack of soap and paper towels. Your tax dollars at work.

I avoided this bathroom for the most part until my last year teaching. Pregnancy and block scheduling (1 hour 50 min classes) meant that I would frequently need to run across the hall in mid sentence and get back in the classroom before the students knew what was going on.

My most recent gig, 9.5 years at home with the kids, gave me comfortable bathrooms, lots of soap and fluffy towels, and an utter lack of privacy. When the kids finally got old enough to leave me alone in there, which took a while because as toddlers they appeared to be budding gynecologists, we adopted the dog. She does not like to be alone. She can open doors. Call me crazy, but I do not enjoy having her all up in my business while I’m in the bathroom.

So, we may hear a lot about the benefits and drawback of certain jobs. I make 1/3 of what I made when I was a teacher. Yep. You can read that line twice. But I do have a pleasant place to potty in peace.

I’m thinking of adding a throw rug and some potpourri.

Email ThisBlogThis!Share to TwitterShare to FacebookShare to Pinterest
Labels: bathroom woes, potty at work, privacy, where do you pee?

I totally understand - one of my coworkers added scented lotions to 'our bathroom'...we worked on a floor with about 95% men so we ladies rarely ran into one another in there...until my cube got moved. To an almost all female floor (marketing). UGH. Days of privacy were over. Now I have a baby in a bouncy seat and a 70 black lab sitting immediately behind her each and every time I use the bathroom, even for showers. I should take a picture of them - squished into our tiny bathroom - it's really quite funny. So anyway, I say - go for it - make it your own!

That is so funny about the faculty bathroom - and gross!

And, for your new office bathroom, don't forget the cute handtowels. Maybe some "special soaps" too.

I am generally not squeamish about public bathrooms, but the faculty bathroom sounds horrific.

You are so funny. Will you please write a true memoir? I think you should.

That last line was HILARIOUS!

I think magazines in public bathrooms are obscene. Who even wants to touch one of those?! And seriously - I'm far from a germaphobe - so I can't even begin to imagine how other people feel about this.

What is it with pets and the bathroom? My cat will lay on the opposite side of the closed down meowing and crying and sticking her paws under the door while I am in the bathroom.

My capture word is "pried" which I am assuming would be pronounced pride, which one would be completely stripped of having to use that utterly horrible sounding faculty facility. Going potty behind slatted doors in a room where people are eating? Ew.

I had a dog that would sit outside the bathroom door and whine until I came out.

Downside being that you have to clean it yourself, but, at least you know it is clean. Well, mostly, in my case.

I remember my shock and amazement when little toddler heads stopped popping into the shower or chatting with me while I used the bathroom.

Who are you? George Costanza?

Being a little Costanza myself, I can quote you the best bathrooms in my building (including the ones with lotion and hairspray for visitors) and most of the city for that matter. I can also advise which ones to avoid.

I am a fan of waiting to get home to use the bathroom myself--however a 45-year old bladder is no longer up for that tactic.


Mansour Engineering believes that completeness, accuracy and integrity of contract documents must be assured by a thorough constructability quality assurance program. Mansour Engineering documents are always comprehensive, clearly detailed and well-coordinated across trades.