A Ride on the Crazy Train 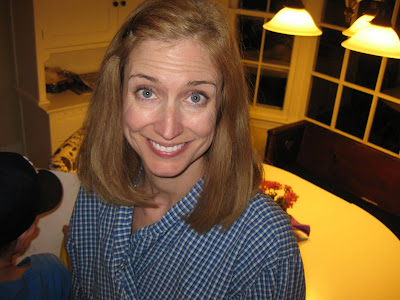 So, today I had two interesting things happen to me-- if you don't count forgetting to provide the snack for the final soccer game of the season (aargh). That was more more predictable than interesting.
Incident Number 1:
This morning, when Molly pointed out what she called "Your Secret Freckle," located on my ample backside, I was caught off guard because she's usually yapping about my cellulite. "Has Daddy ever seen that?" she asked. I said, "He probably has, but he doesn't really notice details as much as you do."
She continued, "Well, when would he have seen it?"
Instead of mumbling something about his sometimes needing to shave while I shower, I went into a chirpy, enthusiastic discussion about mommies and daddies being naked while they make babies, AKA make love, AKA "have sex."
Her brow furrowed and she asked the predictable but nevertheless nervous-making question, "Does that mean you and Daddy have done it TWO times?!" Why oh why oh why did I not just say yes and move on?
Let's just say she got even more family life education today than she did at the Pumpkin House. It's all a bit of a blur, but I do remember saying something about "it" being "lots of fun." Oh my. Am thinking I'll regret that later. I was just trying to be all open and "free to be you and me-y."
The conversation ended abruptly with her covering her ears and telling me I was freaking her out.
Incident Number 2:
While I was clipping my fingernails, one shot into the air and flew right into my nostril. Then it ricocheted off of something (my brain?) and plunged down my throat. Neat-o.
I ask you, which of these two events was more alarming and awkward?
Guess.

Email ThisBlogThis!Share to TwitterShare to FacebookShare to Pinterest
Labels: TMI; my mommy gives me bad dreams, why didn't I say NO

Whoa! The fingernail thing made me laugh out loud and cringe at the same time. How does that happen?? I vote for event #2, but then again I don't have kids, and my parents talked about sex when I was growing up, so it wasn't a big deal to me.. :)

With every post you write about your daughter, the more I want to meet her someday :)

So you broke the news to her that you've done it three times?

I have a vocal disability, and to photograph it I've had a camera up my nose and down my throat, so I feel your pain. Ew.

Still sticking with #1 though.

Well - the nail clipping thing is bizarre - but the sex talk is obviously the one to cause more anxiety. I have not idea how I'll do that in a few years...

Quick aside - I think I memorized Free to Be You and Me when I was a kid and I completely missed the song about mommies and daddies doing the nasty.

I don't hink I can choose. Both happenings are alarming! Maybe the toenail thing can be the new olympic game?

I'd imagine your daughter would have no trouble choosing. I did a full body cringe at #1 and laughed out loud at #2, esp. the off-the-brain ricochet. Also loved the labels on this post. Why-oh-why can't we hook ourselves up to a 7-second delay?

You're the wittiest person ever. I truly believe it!

Also funny this all came about while Molly observed an ever so small "fault." Why do they have to be so darn persistent in the finding fault department?

Please tell me where I can purchase tickets for the Crazy Train, because I know it's going to be hysterical if you're on it!

Thanks for the laugh! In sixth grade I had a slumber party where everyone started asking my mom (a nurse) questions. We already knew about sex but they all wanted more info. about periods and child birth. Many of us ended up in the fetal position, begging her to stop. So if she asks about the fun stuff again...

Ohhh my gosh. You have to write a book. I just laughed out loud. Hilarious.

Hmmmm, definately the convo with your daughter is more akward to me. My parents were not open and free with the sex talk. To be honest, if they were I can see myself covering my ears too.
~Kena

Just spent some time catching up on your blog and laughing my guts out! You are too hilarious. I would probably be more freaked out by the fingernail thing. One time I was in church and the adolescent girl sitting in front of me whipped out a pair of nail clippers and started clipping her brother's fingernails! They were long and dirty and flipping and flying everywhere and I was so grossed out I started CRYING! Then I made my family get up and move to another bench. That is a true story.

Anna, you kill me!! Really, you are just so funny. Could you write the humorous bits to my blog please? Although, there isn't a lot of funny to it these days...but, still, you could get that going.

Thank you!
I so enjoy a good laugh and this gave me one. I can just see you wondering why your mouth wouldn't stop during the sex talk.

Oh the sex talk ... that must have been fun. I don't envy any parent having to go through that... I'm all up for leaving it to the schools - that's what my parents did. (j/k - I'll give my kids the talk - but so NOT kidding - my parents never said a thing!).

I still picture my daughter's face when I explained exactly how the sex... happens. She looked at me like she's just witnessed a grisly dismemberment.

Yes, my darling, that's how you came into the world.

And before you know it, you'll love it too!

I'm thinking the fingernail catapult was the more awesome and shocking and, yes, frightening. What a great visual.