An Ektorp By Any Other Name... 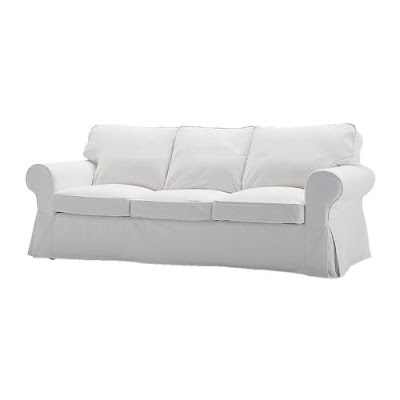 On vacation a few summers ago I was chatting with my friend’s husband, while the hubby of another friend sat nearby. I asked Andy, “How do you like your Ektorp?” referring to his couch from Ikea. I’d had my eye on the Ektorp for a while, for its good looks and low price, but I just hadn’t been able to commit.

Andy replied that he liked it just fine, especially the fact that it was washable and had a 10 year guarantee.

Brian, the other hubby nearby, looked at us with both eyes bugging out of his head. Washable???? 10 year guarantee?????“What ARE you two talking about?” he wanted to know.

“The Ektorp,” a couch from Ikea, I replied. “What did you THINK we were talking about?” Brian proceeded to tell us he thought we were talking about Andy’s recent vasectomy. His reasoning? Well, he knew Andy was the only man in the house with one of those, and he figured I might be interested in getting Tom some of the snip snip too.

I was shocked and amused. Even though I sometimes (okay, often) venture into the realm of TMI, doesn’t it seem rather, well, ballsy that I would be discussing something so personal w/ a friend’s husband? I just wanted to know about a couch!

Since then, our circle of friends has referred to vasectomies as Ektorps. So much so that when I told the gyno I wanted to talk about permanent birth control, the word vasectomy was lost to me. All I could think of was Ektorp! I had to get into a rather detailed description… “you know, the thing where they cut the man’s….”

I find it interesting that Tom and I have yet to be able to commit to either kind of Ektorp. Twice we’ve made the pilgrimage to Ikea to look at the couch, including once last weekend. We sat side by side with the kids to see if it was a good fit for family movie night. It was. Twice we’ve left without buying.
And the other kind of Ektorp? We’ve been pre-op before but have canceled at the last minute, not knowing if that Ektorp was right for us either.

I’m sure you’ll appreciate which kind of Ektorp I’ve chosen for a photo today.

Um - yeah. I think the couch photo is fine. Hilarious.

We need both ektorps! With guarentees!

That is so funny.