My Novagratz Tufted Sofa from Walmart came and I've been meaning to give you an update. Here's what it looks like in the ad: 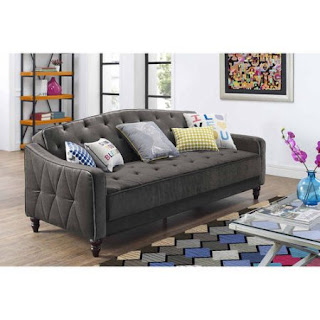 I'd seen this sofa around the internet, especially in the emerald green, and I was intrigued. It looked so pretty and feminine. I needed a new sofa like a hole in the head, but I justified this purchase because this sofa is also a futon, and we don't have a guest room. I thought it would be nice to turn my office into a guest room when the need arose, especially because I'm not getting a lot of work done in there anyway.

Delivery was free and fast (2 days)!

It came in a flat box, with the components (legs, arms) tucked in a zippered compartment underneath the upholstered seat.  It was Ikea-level assembly that involved minimal cursing on Tim's and my part.

I selected the dark gray: 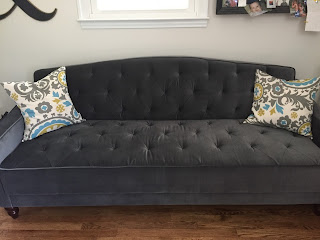 I like that the tufts do not have buttons, because in my experience, those pop off.

The reviews said the couch itself is firm rather than cushy, and I agree. It is not a "sink into" couch by any means. The fabric is very pretty but does NOT look as durable as what I'm used to. For instance, our microfiber living room couch is third-hand, given to me by a friend, who got it from a friend, and it has had numerous spills on it, plus many napping dogs. My basement couch (yes, I have a couch problem) has a nice tweedy/chenille-type fabric that has lasted us 17 yrs without issue. The fabric on the Walmart couch, however, is a non-stretchy velour that resembles velvet. It feels pretty thin and looks like it will not be very forgiving for spills, snags, or dog toenails.

Reviews also pointed out its small scale. It definitely as a lower profile than my other couches. Think futon. 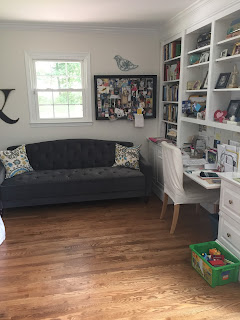 Pardon the lack of a rug.

My sister spent the night last night and tested out the futon. She is our most frequent house guest, so is the best person to judge the new set-up. She got up extra early with Andrew today (is she a saint, or what?) and gave me her verdict when I dragged myself downstairs. She says it was indeed firm, but that she slept well. There is a bit of a gully where the two pieces come together, but she was not bothered by it. She emphasizes it is a futon for ONE person only, not two. Twin sheets fit on it.

Here it is opened flat, a simple process that took a few seconds: 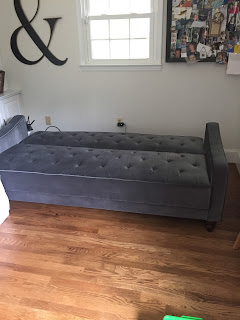 And made up with twin-sized Laura Ashley sheets, circa 1985: 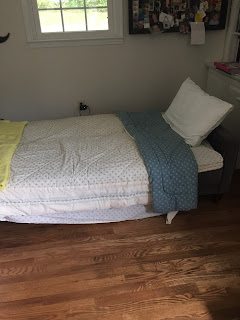 Does it really solve my guest room problem? No, not if we have more than one guest at a time.

Did I need it? Not really.

Other complications: It didn't look good with my existing rug, so now I'm on the market for a new one.

Am I glad I bought it? Yes!

Would I recommend: Yes.

Email ThisBlogThis!Share to TwitterShare to FacebookShare to Pinterest
Labels: home decor, Novagratz sofa from Walmart, tufted futon, Walmart, we have no guest room

What does it say that I still have the exact same Laura Ashley bedding set? And I still love it!

Thanks for the follow-up. Looks as if it will get some use out of it but maybe not quite all you hoped for.

Oh my gosh, you made my day with that last picture. I had that exact sheet set/comforter in 1985. I remember picking it out with my mom when I got my room redone especially for my 10th birthday. My mom passed away a little over a month ago, and it was so nice to have that memory of her come back! Thank you! Enjoy your couch.

I think it looks really pretty and a rug will pull it all together nicely! Love a good LA bedding set and especially love your hardwoods!!

Ditto on the bedding - it adorned my twin beds from 1985-1992! You should start a poll to see what percentage of your readers had the same LA set ;)

I just like that you called dog claws "toenails". :)