As you know, Little Andrew quickly broke through our half-baked solutions to keep him off the stairs.

My strategy then became to teach him to stop, flip over to his tummy, and go up or down the stairs that way. He is very adept at this method, which is a relief. Now that he's walking, I hope he doesn't get too gutsy and think he can go walk down the stairs frontwards, but so far so good.

Even though he is now a master of the stairs, we were still left with the project replacing the stair railings that had been removed by the previous owners. I absolutely approved of their choice of getting rid of the clunky 1980's railings, but I knew we needed to do something eventually, if not for the baby, then for me, and for resale.

I did not feel safe having nothing to grab onto, I lived in fear of sleepily pitching over the 3 foot drop in our bedroom in the middle of the night, and I didn't like how on the main staircase, if Andrew got off track, he could fall off either side.

I got 4 estimates and soon found out that this would NOT be a cheap fix. However, I didn't want it to be something we'd take care of right before moving, not ever enjoying it for ourselves. Too often, we save projects until we move and think, "Why didn't we do this sooner?"

I chose the least expensive estimate, which was less than half of the others, and I'm quite pleased. It wasn't exactly like comparing apples to apples, because the scope of the job changed with the estimates, but I still think I got the best deal possible. The spaces are pretty small, and we don't have a foyer, so I chose much smaller, understated newel posts than I did in our last house. I stuck with square balusters-- my favorite.

I'm really pleased with how it turned out! I feel safer, and in these days of not getting much accomplished, I'm glad to have checked something off the list!

Here is the new railing in our BEDROOM: 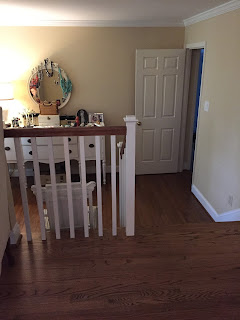 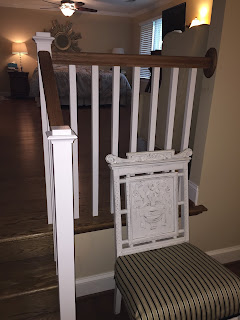 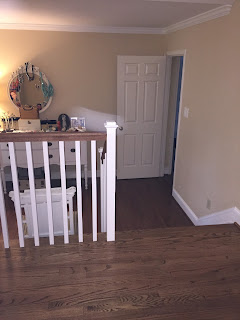 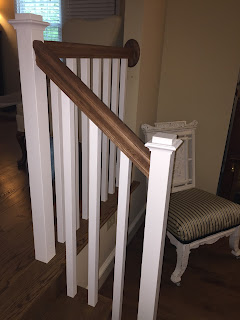 Here is the new railing in our LIVING ROOM: 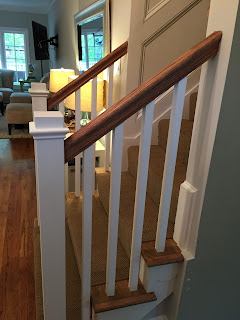 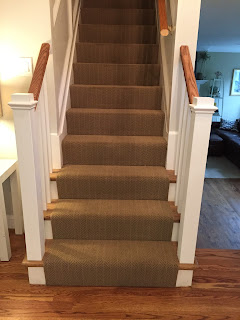 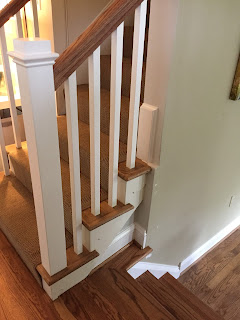 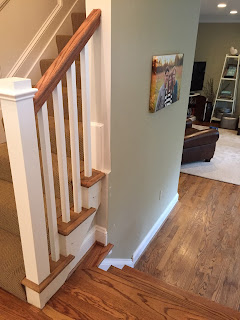 Nicely done and so important, too!

They look fabulous, and I love the idea of not wating til you sell!

It looks great! We just had our railings redone, too. Such a good thing to check off your list!

we live close by in reston- the railings look great- can you share who did this for you guys? I was going to wait until we had to move, haha! but you are so right about getting things done for US to enjoy also! thx, love your writing by the way..

Pretty! I like the square balusters. Its absolutely worth the investment. (My husband and I just installed a railing in our staircase. What a pain. We did an ok job, but a professional job would look a bit more finished!)