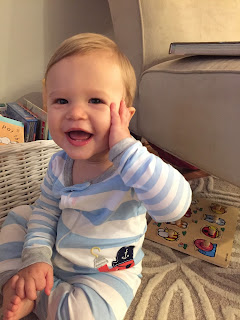 Andrew is into cars right now. We stand atop our hill and watch them drive by on the two streets that meet below. We wave at the mail truck each afternoon. I push him in his little red car. And he plays with Jack's Hot Wheels.

Rather than remind me of Baby Jack the way the Thomas trains do, Hot Wheels remind me of the last weeks I spent with Jack on earth. A smooth, tanned neck, a freckled nose, arms getting strong from push-ups, busy hands. A boy not yet a teen, but already getting phone calls from girls on the house phone, if that's not the cutest thing you've ever heard.

Hot Wheels are not a big kid's toy, so why did they make a resurgence at our house that summer, after years of collecting dust? Jack made up a game to play with Hot Wheels, and he, his friend Joe, and Margaret spent a lot of time rooting through the big orange bin in the basement, choosing the best cars for the game. The week before school started, on a failed excursion to replace a missing Latin/English dictionary, I treated Jack to a few new cars at Walmart. Another one, which he'd ordered online, came after he died. We gave it to Joe.

I don't know how long Andrew's passion for cars will last; I secretly hope it morphs into trains at some point so he can Jack's trains as well.

When babies turn one, as Andrew will on Monday, they don't need a lot of gifts. His gift from us is a 20-pack of Hot Wheels cars. They will go into the big orange bin, Andrew's first toys mingling with Jack's last.

Today has been a rainy day and I've been on my ipad more than I should have been. I've been reading back in your blog today (which is my favorite...so real and not a highlight reel like many are) and thinking of your family (and honestly thinking mostly of your precious Jack...so much of how you describe him makes me think of my son). I am not one who really believes in signs, but just today thought it'd be so nice if some were to come my way to make me more of a believer. This afternoon I drive to pick my daughter up from school and what do I see? Blue ribbons tied to both sides of the front entrance to her school. Thank you for sharing your life.

Coincidence is God's way of remaining anonymous. Signs are coincidences.

I am glad that you found some joy, instead of sorrow, in Andrew loving the things your little Jack played with, too. What a sweet memory. There are certain things that just bring the most bittersweet thoughts when they are attached to a child you have loved and lost from this world. xo Diana

awwww, there are no words. Peace to you Anna.

I've been reading here for years...could I never have imagined we'd be where we are here, today. God is looking out for your family, Anna....with a little help :)