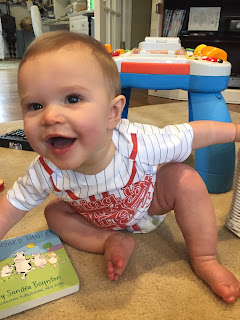 I'm sure Jack and Margaret must have done some squirming when we changed their diapers, but  Andrew makes diaper changes an Olympic event for both of us. And it's painfully obvious, this Mama is no Olympian.

Months ago, we moved the changing pad to the floor, since his lunging in every direction was heart-stopping. He's much safer on the floor, but it gives him too much room to work with as I try to man-handle him into a diaper.

Poopy ones are my favorite.

He gets suspicious as I carry him up the stairs. When I place him on his back, he starts to wail at the injustice, perhaps lamenting that excrement removal keeps him from his favorite activities of immersing his hands in the toilet, reorganizing the pantry, crab-crawling his way up the stairs, or changing my Facebook Profile picture while messing with my phone.

I start in Veteran Mama pose as I breathe deeply and try to press his little body down with one hand,  lifting his chubby feet with the other. A quick release of his torso to whisk the poop-filled diaper away gives him the opportunity to perform a quick flip and land in what I like to refer to as The Wheelbarrow.

This is when his head and chest face downward, he's twisted in the middle, and I have his legs and bottom raised high in the air. He paddles his arms in a swimming motion off of the end of the changing pad and onto the floor. Before I lose my grip on his legs and my mind, I attempt to dislodge any large clumps of poop.

Then the quick little rascal scoots away, his prodigious rear so clenched and dimpled, it's nearly impossible to make progress on the more recessed areas of his nether-regions. "Crack is whack," I mutter, as I nab him by the trailing snaps of his onesie and try to gently poke a wipe where it  really needs to be. His body may be stationary for the moment, but his legs stay moving in a cartoon-style running motion.

When I lose my grip on the onesie, clearly taking a deduction on my final score, he darts out his door into our tiny hallway, grabs the baby gate, which I have (thankfully) locked, pulls himself up, and clings to the bars like a unduly happy circus animal.

My 47 year old shoulders ache from effort, but I know we're near the finish line. I crawl up behind him on the hardwood floor, give him a loud smoochy smooch on the soft folds of his neck and finish my floor routine with Standing Diaper, something moms have perfected over many decades. It's slightly inferior to Regular Diaper, as one chubby cheeks seems to be hanging out more than the other, but it'll do.

He's no longer stinky, or confined, or angry. I conclude a diaper and an unsnapped onesie is perfectly appropriate indoor winter wear, because I'm not about to wrassle him back into pants. I scoop him up, and we head back downstairs to take a bow, hoping that the next poop is hours away.

Sorry Anna, but this has me in tears........of laughter! I am a grandma and granchildren don't do things like that. You see , they are preciously perfect little bundles of joy! I am 61 so I have forgotten my own babie's diaper dilemnas. That is a lie! Personally ,my favorite was them putting their cute little hand IN their diaper! UGH!!

Are you in my house? Because this describes my life all. day. long. Whyyy do they hate it so much!? I too have somewhat perfected the standing diaper. It's the only way these days!

This sounds crazy, but I swear it works. Lay the baby on the floor, pin his arms with your calves and hold his head with your feet if necessary. (Make sure you're as entertaining and fast as possible.) As soon as he's clean, set him free. Then sit on a chair or sofa and put the clean diaper over one knee, absorbent side up. Set baby on your knee and fasten diaper. Perfectly positioned clean diaper every time.

Oh- I had one of those! One out of four wasn't bad! I don't think he ever was prone for a diaper change after he was a year old....lol....this too shall pass....xo Diana

Baby leg warmers and a onesie are perfect for cold weather!

I had 6 wiggle worms, but Jake the Snake ( now almost 24 years old) was the hardest diaperer. We resorted to "the leg", a big-time wrestling move to keep him under control. I'd literally sit on the floor and put my leg over his tummy, pinning him done. Then I could raise his legs and get down to business.

As usual, you're description of real life is hilarious!! I remember those days and would gladly trade a day in the life of a teenager with ADHD and a 7 year old emotional time bomb with sensory issues for a poopy diaper and a wiggly baby! Much love to you and that adorable, sweet boy!

Ha ha. I relate to the baby gymnastics and the corresponding mommy-wrestling moves. Just to add an antidote from our family - There was the incident of trying to change a peed diaper (so I thought anyway) for my 2 year old about a day after she'd eaten this very obnoxious-colored rainbow ice-cream cone. She was standing, of course, because no laying down diaper changes at that point in toddlerhood. When I took off the diaper, a blue turd rolled across the floor. My brother-in-law turned a little green. It was his floor. Good times!

I hear you! We moved to the floor for safety as well, and now I can say with zero shame that I lay him down and then plant one foot in each armpit, basically pinning him down while changing the poo. It works!!!!

Love the Barn Dance book. It was our family favorite. For YEARS afterwards we could all recite it in the car on long trips.

My husband informed me that in Lapp society, they just had a hole in the child's trousers and let them go when and where they wanted. Of course, they were a migrant culture . . . that kept reindeer herds. Maybe the smell of the kids was overlooked.

I ended up putting a belt under the changing pad and strapping the upper body down....tho I first had to wrestle to get the belt clipped, and still work quickly....

Haha!! This made me laugh!!