One thing about being home with a new baby is thinking about all of the things I'd like to be getting done, but that I'm thwarted from doing. I remember this well-- where the walls start closing in, and every one of them looks like it could use a new coat of paint. I know this stage won't last forever, but nothing highlights an inability to check something off a checklist than being inside the constant need cycle of an infant.

It's not as if I'm trying to do anything earth shattering. I just want to keep our house in decent shape, mail a few letters, and maybe poop alone.

Take Monday, for instance. After an epically scream-y day for Andrew, I was exhausted, but I had one goal: to rotate the area rug in our living room.

You see, last weekend, our dog Shadow peed on the one exposed spot where I play on the floor with Andrew. We cleaned it, but after 2 days in which the baby and I went to bed smelling like a mixture of Resolve, urine, wool, and despair, I couldn't take it any more.

I waited until Tim got home, and hoped that he, my visiting brother, and I could rotate the rug so that the stinky part was under the couch.

Then I saw Tim drag in after a long day at work, complaining of muscle or nerve pain in his rear. My brother limped in next, his long drive from WV having exacerbated his back and sciatic pain. I had thought of moving the couch myself during the day, while wearing the baby in a carrier, but my bum shoulders cried out in protest. We were falling apart. Once again, I realized this late-in-life parenting thing is no joke, and will probably require a whole lot of Advil and humility.

I decided to wait on the rug rotation. Instead we stood around talking about our ailments. I lent my brother my Tens machine, just like the ones used in physical therapy. And if letting your brother stick your personal sensor pads on his bare 50 year old ass isn't love, I don't know what is. His 5 year old step daughter kept trying to turn up the shock level. Too funny!

The rest of the week was much happier for Andrew, and Tim and I took care of the rug last night.

The to-do list is still long, but just look at this face: 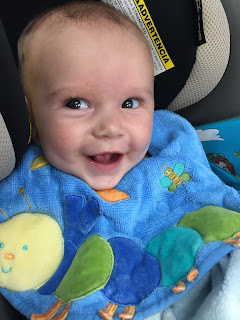 You're right, it's that face that wins every time. Who can resist such a sweet boy? You are sure doing something right!

I am RIGHT there with you. It's amazing how feeding a baby all day makes you look around and see ALL the things that need to be done, but I've never heard someone articulate it so well!

You make the most adorable babies!

He is the cutest baby ever. Can't wait to see you both again soon!

Yes, yep, uh-huh....I can relate. Too much to do and little time and energy to do it. It can be so frustrating. Thank goodness babies are so cute. One look at the toothless smile and all is forgiven.

I remember those times well...I felt the same way. (Get some Nature's Miracle from the pet store - it is the only thing that I have found that works to get the dog urine smell out of carpet.)

Our whole living room smells like a mixture of Resolve, urine, wool, and despair. That's what I get for having three dogs and a very low threshold for discipline.

I do have plenty of Advil and humility, though.

I wish I lived closer to you. I'd dose up on Ibuprofen to mask my arthritis pain and help rotate that rug for you.
And then I'd hold the baby while you pooped alone.

Yet another reason for babies to come with instruction manuals.

"CAUTION: Unending cuteness and/or needs may cause parents to forget about things like stinky rugs"

How could you worry about anything else, really? ;)

We can all relate to this. I now have 6 grandchildren and still can't poop alone. I have used Anti Icky Poo for urine. It breaks down the enzymes and leaves no smell, but I don't know if that's a local product or not. I've used it on mattresses when the kids wet the bed and for dog or cat pee. Also, was at the chiropractor last week and he said he adjusted a fussy baby (a few visits) and the parents said for the first time since he was born, he quit crying and actually slept. Might be worth a try. I think of your family often and am so happy to blog and so happy for your miracle baby.

I think we can all relate. I have six grandchildren and still cannot poop alone. It never ends. Have you heard of anti icky poo? It breaks down the enzymes in urine and vomit and leaves no smell. I am not sure if it is a regional product or not, but I have used it for dog and cat pee and on mattresses when the kids have with the bed. Also, I was at the chiropractor last week and he said he had a just had a baby a few times that had cried nonstop and with a few adjustments, he quit crying and slept. Might be worth a try. LI've your blog.

Yes, that face. I'd run myself ragged too for that smile. Cheers, Anna.

Is it terrible that I find this hilarious? Just know that I'm 46 so my laughter comes from a place of understanding/empathy. ;)

I second the vote for Nature's Miracle. It's actually pretty miraculous. Good luck. :)

I saw on your camping post you are "almost" exclusively pumping. Go Mama! I exclusively pumped for an entire year. It is one of my most difficult accomplishments -- including exceeding birth and law school. From one mama to another, keep it up! One day at a time.

He is absolutely adorable!

He is absolutely adorable...

I had taken a break as sometimes your story and grief absolutely broke my heart.
But...I've been away too long! Imagine my surprise, consternation and then absolute joy when I deduced that yes that lovely baby was indeed yours! Well done all of you. I'm so tickled for you.
The grief never goes I'm sure but what a glorious gift from God.
I read all the posts to get caught up crying and laughing by turns. I will be back and will be staying this time!
Best to all
Heather from Nova Scotia.

I can so relate this post! I just turned 40 and have four kids ages 15, 13, 10 and nearly 10 months. It has been such an adjustment to go back to having a baby again after a break of 9.5 years! I love it in some ways, but it's so challenging never to have a moment alone and to spend the whole day doing things, but feeling like I never get anything done (mine doesn't sleep that long, either). I do know the years go fast and I'm just trying to be in the moment. I'm enjoying your blog and glad to see another 40-something go through baby stages again. I don't know anyone in real life doing this!