I've kind of lost track of time, but it appears that Baby Andrew will be 5 months old in a week or so! You are WELL OVERDUE for some new pictures, so here you go! 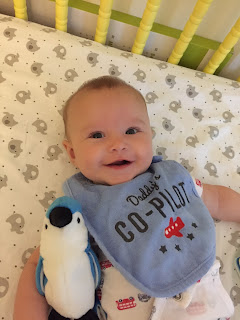 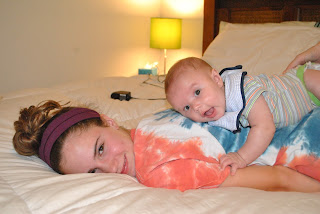 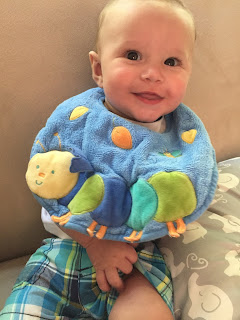 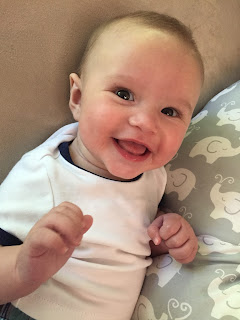 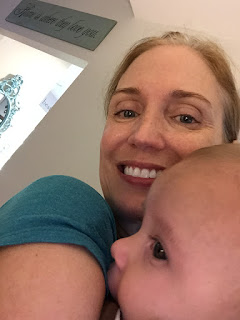 Hard to believe I've spent nearly 5 months wearing a hole in this couch, or doing my circuit between kitchen and living room, to lull him to sleep in the front carrier. We are doing well. I must say I don't feel older or more tired than I did 17 years ago, but maybe I just felt pretty old and tired back then.

A lot of friends are on the cusp of becoming empty-nesters right now, as I thought I would be in three years, so I think the biggest adjustment has been getting used to the idea that next 18 however many years I have left will look different than what I'd imagined. You might think I'd already grasped that, having lost Jack, but a new baby is just another re-imagining or recalibration of my expectations.

Speaking of changes: Andrew starts daycare in about 2 weeks! Yeah, you can start praying now, because we chose the FARTHER AWAY ONE since they could do part-time, whereas the close one (2 minutes away) could only do full-time. For a car-hating baby and his mom, this could be interesting. Oh, and have I told you we live in the traffic capital of the universe so every trip takes twice as long as it should?

I am looking forward to getting back to work. Some immediate goals are:


I admit that the first few days of childcare may look a little more like:


These waning days of summer are usually difficult for me.

They remind me of the last few days/weeks before Jack's accident. The first week of school is rough, too. This year the crapiversary of Jack's accident, September 8, falls on the 3rd day of school, which is also Back to School night, and Andrew's first day in childcare.  Gah.

Oh, have I mentioned this would be Jack's senior year? That feels like a lot.

I feel your pain. My son would be starting Kindergarten & his crapiversary is the day before school starts. 5 years out or in whichever way you want to look at it...:(

It sounds like a lot to me too. Hang in there and know prayers come from neat and far

That is a lot.


Be careful of your "alone time" with Tim. You may end up with twins next time...lol! Holding you up in prayer during the upcoming crapiversary. ((Hugs))

What a beautiful, happy boy you have!

Know that I'm sending prayers your way with the up coming crapiversary.

So much to shoulder... Sending love. Also - I need to hold that baby again soon!

Love to you and your beautiful family, and HOORAY for childcare/next books/speaking gigs!!

You are loved and prayed for daily. God bless.

Sisterhood of the Sensible Moms said...

You will always be covered in prayer. Thank you for your honesty. Looking forward to hopefully catching you speak if you are ever near me. Praying for you from PA.

I continue to think of you daily, sending more love and hugs your way as the beginning of the school year and crapiversary both approach. Every beautiful sunset, and every approaching storm bring thoughts of Jack, you, Tim and Margaret.

And thank you for sharing those pics of cutie pie Andrew!!! They make me smile so much!

Omigoodness your children are beautiful! Thank you for the update and the pictures. Praying that God grants you the peace that surpasses all understanding. Much love from Austin, Tx.

That smile....OMG he is so adorable. Thanks for the update and you are always on my mind!

I LOVE seeing Andrew's baby pictures. Five months - yikes!
Hugs for getting through those early September days. My daughter's been gone over 5 years now so I can't look forward to shopping for school clothes for her. Guess I'll do a bit of new outfit-shopping for myself. Cheers!

Andrew is one happy baby! My thoughts are with you as we move into September.

Oh, good gosh....I never met you and this has got me smiling and crying at the same time.

Crying for his Senior year. And then smiling at that gorgeous (little AND big) sister and adorable little face.

Love you, and sending much prayers over the next several weeks!

GAH! The cuteness is wonderful. Thanks for sharing the pictures. Excited for your upcoming adventures, and will pour on some prayer for inspiration, and peaceful car rides. I had a car ride hater, too. Honestly, she still kind of hates car rides and she's 16. Thank goodness for headphones, for both of us. Keep on truckin' lady!

Andrew is gorgeous and it IS a lot. It's so much. I know you've got this though. Love and strength to you. <3

That Andrew is one smiling dude. A natural charmer at 5 months. Time races on. Good luck with the drive to child care. I bet he'll do great. You seem so organized, you will start to get all those to-dos checked off. Your crapiversary falls the day before my first born's birthday. Dates and time that bring me pain are joyful to others. Each day is a swirling mass of joys and deep sadness. Nothing seems black and white like it did when we were young. I hope that precious boy brings you comfort during the tough moments.

Thinking of you during this tough time. And oh my gosh is your baby and daughter gorgeous. xo xo

I can't imagine the next few weeks for you and your family, just breathe if you can, laugh if you can, and cry if you need to. Prayers and hugs.

I will be thinking of you on the 8th. Good luck to Andrew on his first day of daycare--he sure is a cutie!! XO, NoVa Mom Jen

That Andrew is freakin adorable. Wow, senior year. Wow. Sending you strength and love. And peace.

Oh, Anna...so many things. I had been thinking of you already regarding the approaching crapiversary, but to have all of those other things swirling around you as well...yikes. I was praying for all of you only yesterday, coming out of a store and seeing the blue ribbon on my car's back bumper. Hang on, friend. <3

Anna, just have the car windows open on the way to daycare and if everyone hears Andrew screaming maybe you can have your own car pool lane. :)

Thinking of you and your beautiful family. Now and always.