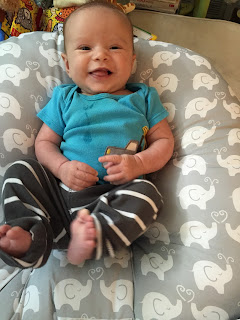 Andrew loses his shizzle in the car.

As a result, I haven't taken him anywhere except for church for the past several weeks. A two hour drive to West Virginia recently was just too much to bear, so I retreated to the living room couch, where I've made quite an indention in the cushion.  I realized yesterday that if I didn't try to venture out again soon, I could become a hermit, and my boo might never get used to the car. Oh, but what a terrible feeling it is to be driving while your wailing infant is in the back, out of reach of comfort.

Today, we ventured to Walmart, amid much screaming, in an attempt to pull the band-aid off.

Once inside the store, he calmed down and enjoyed looking around. I got a little cocky, quickly filling the cart, and even taking the two of us into the grungy family bathroom, so I wouldn't have an accident. Moments later, Andrew started screaming again, and we high-tailed it to the checkout. A friend happened to be in line behind me, so I felt a little more relaxed than if it had been a stranger.

As I pushed my cart to the car in the bright sun, holding Andrew under one arm, a stranger did approach. She quickly offered to help, loading the groceries into the back seat and taking the cart off my hands so I could get the baby cooled down. She could have criticized me for having him out in the heat-- his head was beet red from screaming by this point--  but she didn't. She just lent me a hand. I sat in the car for a while, nursing Andrew and thinking what a crazy journey this is. I mean it has been almost 15 years since I've done the front seat nursing thing! As he cooled down and calmed down, so did I. I changed his diaper and steeled myself for the stressful ride home.

He was a wreck within seconds, so I think I'll stick to the couch a while longer. Andrew seems happy here on my chest, Netflix is queued up to Call the Midwife, and this jumbo bag of Walmart trail mix won't eat itself.

Next time you need to go to Walmart, I'll be happy to sit on your couch and watch Call the Midwife with Andrew!

Andrew is completely adorable. What a doll baby.
This is my 3rd attempt at leaving you a comment
since I discovered your blog last week. I was just
clicking away one evening last week and landed on
your blog. I'm a sucker for a good writer and you are
a great writer!
I skimmed your blog and read about Jack. I remember
your story from media coverage at the time. I live
in Montgomery County, Maryland, so somehow I felt connected.
I want to tell you that I am sorry for your loss.
I am also glad to see that you & your family have carried
on. That takes an unbelievable amount of strength.
I'm not going to preview this comment for fear of loosing it.
Take care and thanks for sharing,
Monica

Oh you do make me laugh. Especially the tags you put on your posts.

Have you tried putting something that smells of you in there with him? a scarf that you've worn, or you could sleep a couple of times with some of his muslins? Sounds bonkers but definitely works often enough.

Also ime it's something that they just get used to (when they work out that you collect them at the end of each ride), and building up from very short trips is the way to go.

Have you tried letting him sit in the car seat when you are at home? This may help him get used to it. Maybe the seat has something that is pinching him or sticking him after he is buckled in. He is a doll! Very happy for you!

Ps that is one gloriously beautiful, happy baby you made :)

Ahhh. I remember this. We had to have Italian Opera blaring - the only thing to soothe our wild beastie. Neither of us liked opera in the least, and that volume hurt the ears, but it worked for him. So we both had earplugs in, and he was all Mr Happy Pants. Who knew? The car-screaming didn't last...bet Andrew's will end soon! Cindy

Does he do any better if somebody is sitting back there with him? Make sure you have your tissues near the couch. I always seem to cry when watching Call the Midwife. So good. Have fun cuddling that beautiful baby!

I remember when my son was young he HATED the car. It's been 21 years but I STILL haven't recovered from our trip from Houston to Tampa....

On a trip to PA we bought children's cassette tapes with songs about Winnie the Pooh and silly songs. That turned out to be the best purchase we ever made. As long as those songs were playing the baby was happy.

But he looks so happy in the photo. I can imagine how frustrating his screaming in the car is for you. Did you have a talk with him? Tell him most babies love the car and fall asleep when they're in it? And let him know that one of these days he'll want to DRIVE the car? Sorry, I couldn't help myself. Better to laugh about it, I guess.

Both of my kids HATED the carseat. Imagine a three hour drive to Ocean City, Maryland, screaming baby in the back. I thought the screaming would stop when they got tired-never happened. It just became my new normal. Eventually when they didn't have to be rear-facing it did get better. But I feel your pain for sure! I kind of thought my kids were the only ones who hated car rides, hang in there!

I do hope the suggestion about giving him something with your scent works -- that'd be easy. Otherwise, I'll unhelpfully reiterate that he'll eventually stop hating the car. I remember the reverse situation -- mine crying when I'd slow down or God forbid -- stop -- and so I'd plan out routes and turnarounds to maximize smooth cruising. Also: cuteness. He is so flipping adorable.

My first born, now age 4, screamed her head off whenever in a car seat, continuously, for nearly 2 years. She didn't even fall asleep as a newborn in a car seat for a long drive. Different seats, still screaming.

As a result, other than church, I also stayed put. Car rides were too stressful.

Thankfully she loved the stroller, so I'd happily walk a mile both ways in our hilly neighborhood to the grocery store with her (ice packs in a cooler bag worked wonders). Anyway, know you're not alone! Maybe he'll like the stroller my more? That way you get out and about with some fresh air at least.

I love reading your posts about Andrew so much. I can vividly remember the losing of shizzle by my middle boy in the car so that by the time I would finally pull over I'm not sure which of us was crying harder. Much love to you. He is THE.CUTEST.

It won't last forever. You'll both laugh about it one day. So keep trying. And, pain-in-the-neck as it is to move the car-seat back and forth, maybe use it in the house a bit for happy things, like meals or mommy-singing-time so Andrew can identify good things with it. Cheers!

I completely forgot until you posted this. My middle daughter was like that. Dropping my older son off at preschool school consisted of blood curdling screams for 20 minutes. I didn't leave the house with her unless I absolutely had to. I can't even remember how it was resolved. I have completely blocked it out.

He is so cute. If you listen closely, you can hear my old, shriveled ovaries cry out.

Oh the days of screaming babies in the car! Something that worked for me was getting a small portable fan that plugged in the car charger. The little bit of air helped keep them cool and soothed them as well! Those car seats can get hot even with the ac on full blast. Good luck!!

Its so stressful to listen to your baby crying when you're driving. Hope this passes soon!

I love that stranger. (Does that sound weird?)

My method for a crying baby in the car might not seem nice, but it always worked for my kids. Roll down the window beside them. This works especially well when you are going fast! Lol! I am not sure if the wind in their face soothes them or takes their breath away...but give it a chance and let me know if it works!

Oh, boy do I remember trips like that with one of ours. We called it "car colic" and yeah, it was intense. He did eventually outgrow it, but until he did, we stayed within a one mile radius of home. He's now 15 and working on his own driver's license, and no longer screams in the car. Good luck!

Your comment reminded me how we had to listen to Taylor Swift's "Shake it Off" on repeat for 6 months every car ride. She didn't sleep much at daycare; put the song on and she was out for the ride home!

Hi! Similar to Kim who posted about the angle of the bucket seat, my nephew hated riding in cars and my brother came to find out their son had a hernia (even though he was checked for that when he was born) and the way he sat made it so painful. Lying on someone's chest was the only thing that seemed to sooth him until they found that out. Probably not the case with your cutie pie, but just thought I would mention it, just in case.

and the car was one of the few places my kids would sleep:)-ha! Good luck! He's a cutie! NoVa mom Jen

Both of mine were like that. For my son, tuning the radio to static worked. For my daughter, it did not. We ended up buying a portable dvd player and a mickey mouse clubhouse dvd. It just ran continuously whenever the car was on and she was content with that. Once they were turned forward both kids were better.

Oh my, I'm so sorry he doesn't like the car. Hopefully at some point he will start to enjoy it. {{{Hugs}}}