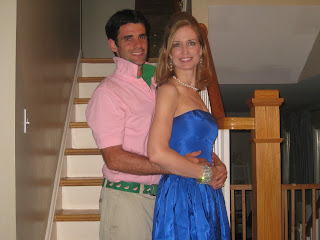 So, turns out I broke Tim's car.

Remember when it conked out on me during my writer's retreat earlier this month and Mike and others came to my rescue? Well, turns out even good old Southern generosity cannot heal a cracked engine, so we now have the unanticipated expense of buying a new car. Yuck.

Most people who buy new cars are a bit sad to see the old ones go. So many memories. Mix tapes wedged in a broken cassette player remind us of our carefree college days. In the case of a family car, there are macaroni necklaces hanging from a rear view mirror-- missing sippy cups found in "the way back," and the way every stain tells a story. I can remember Margaret barfing up goldfish on an Amelia Bedelia book in this car. Shadow's muddy paws on the black upholstery after we went geocaching on a soggy day. Marks from Jack's baseball cleats. The crank windows that would confuse the heck out of neighbor kids when we gave them rides.

Since our family doesn't love change-- remember this picture of Jack and Margaret saying a tearful goodbye to our old green toilet?-- I know that getting rid of Tim's Jetta will be tough. New car = no Jack memories in it. No Margaret, Jack, and Shadow wedged together in the back seat. No Jack learning how to drive stickshift in 2 years.

Getting rid of the old car is sad, but it does give me the chance to poke fun at Tim a bit by telling you a little college story. You may have noticed that Tim is a fine looking man. And by fine, I mean f-i-i-i-i-n-e stretched out to 3 syllables the way Jimmy Walker would say "Dy-no-mite!" back in the day.

Well, when we were at Wake Forest, apparently Tim caught the eye of a few gay guys on campus. We didn't hear this first-hand, so I can't vouch for its accuracy, but because I have always greatly admired the opinions of gay men (Hello early 90's equivalent of Clinton Kelly and Nate Berkus!) this only raised Tim in my esteem. Good taste in accessories, good taste in men, they were playing my song.

We also heard that these guys had bestowed upon Tim a nickname, much in the same way my sorority sisters would say, under their breath, "There goes 'Wolf Man,' 'One Nut', or 'Sparky.'"

Imagine my delight, years later, when Tim, Baby Jack and I received his randomly issued plates from the DMV reading "YMM-5555." Too funny. I've gotten a lot of mileage out of this one!

Tim may miss his old car, but I don't know whether he'll miss those plates.

LOL! Love the car tags! :) I had to especially laugh at the kids, though - my daughter cried when we got the mattress replaced on our master bed. The guys were carrying the old one out, and she was absolutely hysterical. They kept looking at her as if she was nuts. Haha! She did the same thing when we got rid of our old recliner chair, and our ford explorer (which had sat in the driveway for over a year because a part of the engine block fell out of it). So yeah...I get the no liking change thing. Hope you enjoy your new car, though!

You know...I'm pretty sure you can transfer the old plates to the new car!!

that is TOO FUNNY!!! yum yum. love it! chris and i went to wake forest, and we had a good friend who was gay. we used to go out to clubs with him, and these men would always come up to me and tell me how cute my boyfriend was.... i was not sure if i should be flattered or not! he was very (and still is) boyish, and i think tim is, too.... i guess it's appealing!

Hard to bid goodbye to the old, especially when there are strong memories and hand-cranked windows.

Love the green toilet photo -- they are adorable. what a great memory to capture. hysterical! Good luck with car shopping - not my favorite thing to do either.

Here in NC we have the option of transferring the plates to a new car.

My kids have been trying to talk me into getting rid of my Saturn that I bought new in 2007 because they're tired of it. I keep telling them there is absolutely nothing wrong with that car and it's paid for!

Getting rid of the car I had before it was bittersweet. Darin and I had bought it when I was pregnant with Devin, our first baby. There were a lot of memories in that car.

Love silly posts! This is a great story and gave me a much-needed laugh today. When you mentioned crank windows, it made me think...I don't think my kids would know what to do with those. :)

Ummmm...most people just transfer their plates from one car to another- just sayin'.....xo Diana

Love the story about Tim. Chris always got a lot of gay attention too. Maybe it's a short thing...like they're even cuter because they're mini? Either way - always took pride in "what him? oh yeah - he's mine."

I remember crank windows! And, yeah, transfer those tags!!

On another note, we're holding you all close in thought and prayer this evening as these storms roll in.

Love and hugs from the other side of town...

I used to live in Virginia and transferred my tags from car to car numerous times. If you have more than 3 months left on them and decide to get new tags, make sure you turn in the old ones so you can at least get a little of the money back from them.

Oh I think you definitely need to keep those plates! You can get a lot more mileage out of them - ha!

Haha! Fresh car and fresh memories because you are still making them.

so funny, and that photo of the green toilet - your kids were so little!
good luck choposing a new car. we also need a new car and I'm having a hard time getting my head around spending so much money!!

It's definitely emotional getting a new car. Good luck in the hunt! You make a beautiful couple in your 80's clothes.

Oh Anna--you made my morning. LOL!! I love it. You'll have to get some Yum Yum plates for the new car. ;)
xo
Annie

Awesome way to start my morning! I vote for transferring the old plates to the new car!

I love the popped collar and watermelon belt!

I always cry when we sell our cars. Hugs to you...and to yum yum

You are two cool.

that's hilarious. finding a way to keep that nickname going seems so worthwhile. :)

First of all, love the bathroom makeover! I need you to come and tell me what to change in my house!

And what a funny story about your fiiiine husband. Console him by saying that you can always special order plates to say what you want. ;-)

My son is a very handsome guy who has been shadowed in stores (and not too secretly!) by gay guys and he is always running the other way and telling us about it. He dragged me out of a bookstore one day because he said a guy was kind of trying to "edge up against him"! I would have laughed, but I was trying to find an art book; he quickly found it, even paid for it, and we were on our way! I still get a smile out of that--he was about 32 or so---and completely insane about that sort of thing! He gets a lot of "waitress attention", (even got "shoulder massage" from one when his wife was sitting across the table! Drove her batty---but we laugh about it now. I have to say--he's still a handsome guy at 40. Still--he has never had a plate or nickname with yummy on it--too bad! He'd make them give him another one, I think! Isn't it funny how mom's can read their children's minds sometimes? But that's another story for another day!
Thank you, Anna, for always making me think,and pray for you still, and although I have lost a child, too--be grateful for what I do have.
261 onerFin

That. is. awesome. I am going to find it very challenging to not think "Yummmm Yummmmm" in my head whenever you reference Tim in the future !

Oh my goodness. That's hilarious. You definitely need to save the plates and display them in the house!

You absolutely have to keep the plates. Plus it's cheaper that way because you don't have to pay for new ones.